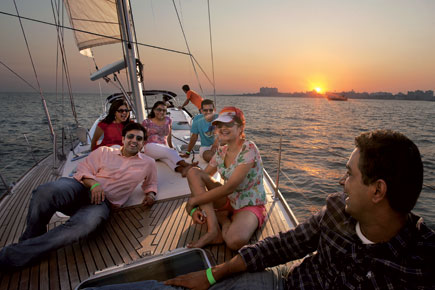 As she nibbled on foie gras millefeuille and sipped on Dom Perignon White Gold, Himali Batra scanned the poolside bar at the Ritz Carlton, Bengaluru, for the hottest guy available. Despite being part of a small group of only 25 people, all complete strangers to one another, she found plenty of suitable options. There was an author, an award-winning journalist, an investment banker who had just purchased a brand new Jaguar convertible, two interior designers and a corporate lawyer. She decided to go with the lawyer; after all, he had been making eyes at her all evening. As she chatted with her new ‘friend’, Batra couldn’t believe how different her life had become. Six months ago, the 32-year-old architect had been desperate to get just one date, and now she had met 12 eligible men in the past two months alone. She attended whisky tastings with them, slow danced at moonlit violin concerts, gone sailing on a luxury yacht and even played a game of treasure hunt at the Metropolitan Museum in New York City—all thanks to the exclusive dating networks she is a member of.

“My biggest concern with dating in India was: ‘Is it safe?’ You can’t just walk up to a guy in your office or at a bar. How will you know if his background, his intentions or his personality matches what you are looking for? And forget about marriage portals; half the time it is not even the person but their parents who are online. With invite-only networks like Floh or A World Alike, for example, I know exactly the kind of people I will be meeting. They screen the group for you. Not only is it safe, there is no stress of getting conned or spammed. You know everyone here is there for the same reason—to fall in love,” she says.

“When you attend an event conducted by Floh, we guarantee that you will be meeting with some of the most intelligent and interesting people in the country,” says Siddharth Mangharam, founder and CEO of Floh, “It is our commitment to our members to ensure this happens every time.”

Mangharam isn’t the only person whose profession is to curate the ideal date for urban Indians from around the world. Aisle.co, A World Alike, Footloose No More, Single in the City and Hush, all offer singles the chance to meet a ‘safe and meticulously tested’ companion. All you need is a stellar CV, lots of patience and around Rs 20,000 lying around each year.

“Membership is not for everybody. It can take us anything between one to ten days to decide if we will accept you or not. We do have an interview call and then conduct rigorous research to make sure that you meet our network’s criteria,” says Able Joseph, founder of Aisle. co. When I ask him what the ‘criteria’ includes, he offers only an outline sketch. “Our formula for judging who becomes a member or not is what makes us special. I don’t want to disclose it, but I will tell you that one big factor is language. If we find a single grammatically incorrect sentence written by you online, we will not offer membership. Our class of people is urban, outgoing, well-travelled, they are comfortable in a bar and have usually attended events like Sunburn or NH7 Weekender.” With over 17,000 members in 40 different countries and investors such as Anand Vijay from Microsoft and Shashank Mehrotra of Bigrock backing him, whatever Joseph’s secret formula is, it seems to work well. “Of course, we want to grow our membership base, but not at the cost of safety,” says Joseph, “I would say that I reject around 20 to 40 applications in a week.”

At Floh, however, the odds against you are much higher. Only eight out of every hundred applications are allowed to join the group, which currently stands at 3,000 members in four countries. “After you express interest in wanting to join, one of our team members will usually have a 20 to 30 minute telephone conversation with you. We then run your answers through our algorithm to decide if you can join or not. Some of the things we look at include age (he must be less than 40), hobbies, employment status (no unemployed people, please), English- language skills and education (they must be well-educated). We are also strict about family background and personality—we want someone who is at ease, open-minded and fun,” says Mangharam.

Himanshu Gupta’s A World Alike has its own three-phase application process. “We don’t let just anyone into our group. It is purely an invite-only network. From the time you send in your request to join, you are under our scanner. This means we will interview you, check out your online presence and find out as much as we can about your background—only once we are positive that you will get along with the rest of the group, will we send you an invitation to join,” says Gupta, founder of A World Alike in Delhi. And it doesn’t end there. Once you are invited, you are ‘tested’ at a trial event. “We ask you to come to one of our events to see how well you get along with the existing group. I don’t view these people as members. They are my friends and it is my job to make sure they are as comfortable as possible. If you want to call it exclusivity, then go ahead,” adds Gupta.

When it comes to exclusivity, however, no one can match Hush. With no website, a membership of only 150 people, a joining fee of Rs 30,000 (with an additional Rs 10,000 per month), events that cost as much as Rs 12,000 to attend and a 12-page application form, the founders of Hush label themselves a ‘secret urban clique’. “You know that group in high school that you badly wanted to join… well, we are it. Our goal is not to have thousands of people. Instead, we would rather have a small database but of extremely high quality. I wouldn’t call us a group of urban people but a group of urban rich people,” says Deepti Thakur, founder and ‘queen bee’ at Hush. The application form includes questions about your residence, gym membership, income bracket, international travel history, couture brand preferences, family background, hobbies and relationship status. “Yes, we make it hard to get in,” laughs Thakur.

Once you get in, though, the sky is truly the limit—particularly at Hush, Floh and A World Alike; networks that hold anything between five and 20 events a month in different cities around the world. “Events give you a chance to loosen up by taking part in an activity. We don’t do drab things like a dinner and drinks. Our events are much more interactive—like a really effective ice-breaker. We will hold cocktail making classes, wine and cheese pairings, hiking trips or vintage car tours,” says Mangharam. At Floh’s launch in New York City last year, the team pulled out all the stops, hiring the 100-year-old luxury yacht that was featured in The Great Gatsby. “It was amazing. F Scott Fitzgerald had sailed in it himself,” he says.

With 12 marriages taking place through Aisle.co this year alone, Floh gearing up to launch a mobile app, A World Alike looking to expand to Mumbai, and Hush claiming profits of Rs 5 lakh a year, things for this business are looking up. But Ayesha Grewal, a Mumbai-based psychologist, says that people need to be very sure about what they expect of such networks. “Traditional routes to romance are vanishing. People are busy and want a safe way to meet new people. Social boundaries are also blurring and the affluent suddenly find that their neighbour or colleague is not from the same background. But exclusivity guarantees companionship and not necessarily commitment. One should be aware of this,” she says. “I often have clients who feel that they were ‘taken for a ride’ because they were looking for something serious and the other person was not. And now it is not just a personal loss, but a financial one as well.”

Gupta emphasises the point that his network is like a ‘fun house party’. “I can’t promise you will get married. I don’t think anyone can. I can promise you an amazing time and some great new friends. Whether people come looking for a quick fling or long-term commitment, is not my call.” As Mangharam sums it up, “After working hard all week, everybody deserves a chance to have a great weekend. We don’t just help you make friends, we also help you unwind, learn something new and make the most of your free time.”