Devotees of a three-pointed star 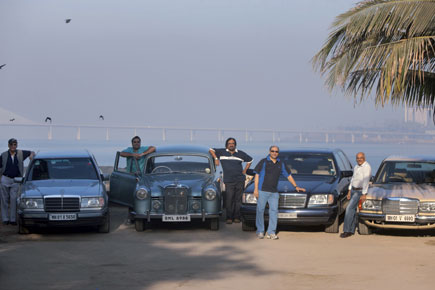 Devotees of a three-pointed star


On a morning of all mornings, with a couple of pink brushstrokes stretching across a blue sky, six yesteryear Mercedes Benz cars rumble into a quiet lane near Shivaji Park, Mumbai. Their seven occupants get off where the path ends and Dadar beach begins. The silvery sea sloshes about contentedly. In the distance, the harp of the Bandra-Worli Sea Link is aglow with the first rays of the sun. A slight chill lends the air an aphrodisiacal edge. But on this morning, the only lust the seven men betray is for their cars.

The assembled are members of the Mercedes Benz Club India, formed in 1992 to bring together lovers of the German marque. Initially, the group was called the Three Pointer Club. In 1997, once certified by Mercedes International as India’s official Mer- cedes club, it acquired its present name. Joining the club takes a one-time payment of Rs 18,000 and an annual fee of Rs 1,200. It has nearly 50 members in all and most of them are well off. But the club leadership insists that wealth and status do not matter to it. There have been cases, its leaders say, of people signing up even without owning a Mercedes, motivated simply by their passion for the brand—and for motoring. “You have to know what’s under the bonnet,” says Sharad Apte, the club’s chairman emeritus and among its older members. The club usually meets the first Sunday of every month. It also conducts motorcades and occasional drives to the Mercedes Benz factory in Pune.

Apte, an advertising and industrial photographer, is a tall, lean and fair man with a slim white moustache. Ever the enthusiast, he was among the first to arrive this morning. After driving his 1988 W124 sedan to the spot selected by the photographer for a picture, he stands back and plans how the rest of the cars should be parked, his arms describing lines in the air. At some point arrives Jayant Shah, a young man who recently turned husband. Apte asks businessman Rajan Dandekar, another member, why he has subjected a newlywed to such an early wake-up call. Shah, who could pass off as a reborn Feroze Khan with his shaven head, fair complexion and Ferrari aviator sunglasses, smiles helplessly. He belongs to the family that runs the All India Motor Trading Company at Opera House. Along with Shah is another youngster, 20-year-old collegian Manan Sagar, who belongs to the Pransukhlal Jewellers family.

But the boy’s heart is in jewels on wheels. If you mention his family business, he’ll respond with, “But I’m into cars.” There are three more people at the photo shoot. There is Freddie Turel, who runs a business of dental care equipment and is a founder member of the club and its vice-president. There is Deepak Dalvi, who outsources labour and equipment to airports. And there is Amol Nayak, an architect.

In the course of the morning, one gets a chance to ride in Apte’s car. The interior is spacious, the leather seat comfortable, and the long hood that stretches out in front precedes the car’s passage along a road like an elaborate introduction, making one feel important. Arising from the foremost tip of the car is the famous star emblem. It seems to steer the car and serve as a shield. As we pass a car parked brazenly in the way of traffic, Apte wags a slender finger at its driver. “No one has any discipline anymore,” he says with a resigned air.

The oldest car at the meeting is a 1956 180D sedan. It belongs to Amol, a 36-year-old in a beige Ralph Lauren wind jacket with a mature air about him. A diesel car, it is noisy but beautiful. The shade is ‘hellblau metallic’ (German for skyblue metallic, in case you wonder). The steering wheel is slim and white. The dashboard is bakelite with wood accents. An original Becker Europa radio set—at least Rs 50,000 in today’s market—provides entertainment. We listen to Dire Straits’ Money for Nothing on FM.

Freddie Turel has an even older car. He has not brought it today, but we see it when we meet him at his home in Dadar Parsi Colony, one of Mumbai’s sepia-toned neighbourhoods. It is a 1934 170v Cabriolet, bought in 2001 from the Maharaja of Bhavnagar. It is a two-seater but has a third, inconvenient seat at the back called a ‘mother-in-law seat’. It requires stepping on an inbuilt rod and climbing in. Old cars and bikes lie all around the compound, treasures under tarp, and when asked exactly how many vehicles he has, Turel struggles to come up with a number. But the Mercedes is his favourite. “I drove a lot of American cars also. They had power, but not the stability of Mercedes,” he says.

It is a quiet afternoon in Turel’s home. Not far from his feet, on the cool maroon floor, someone is asleep. It is his white Labrador. Asked if the pet’s name is Mercedes too, Turel grins. “It’s Mike,” he says. Turel was a boxer in college. A pair of miniature black gloves hangs from the roof of his Nissan SUV, and his powerful arms bulge out of his shirt sleeves. But no, the dog was not named after Mike Tyson. “He’s the opposite of Mike Tyson. He is very mild.”

Perhaps the most recognisable member of the club is Kiran Shan- taram, son of revered filmmaker V Shantaram. Referred to as a ‘celebrity’ when we meet him at his office at Rajkamal Studios in Parel, Kiran Shantaram rejects our choice of label. The 70-year-old points a finger overhead, to a garlanded photo of his father, and says, “He is the celebrity.” V Shantaram drove a Cadillac in his time, but Kiran Shantaram had only one car on his mind since his childhood. “We used to live on Peddar Road,” he says, “When I was nine years old, every evening I would see a black car go by. A big one. Driver with hand gloves and hat, lady in white sari and [with] white hair. I got curious. Whose car was it? What car was it? My father told me [the make of the car]. From the time I got my driving licence, I have only used Mercedes. I feel it is a car for Mumbai, because you don’t feel the potholes.”

The meetings of the club are informal. A lot of the conversation about cars involves model class tags: E-this, S-that. A casual observer can get lost in the jumble of letters and numbers. Competition among members for rare models is subtle but fierce. The club’s newsletter quotes a member as saying, “When there is news about a classic Merc on sale, nobody is treated as a friend. You don’t want anybody to pip you to the post.” Rare models not only provide a collector’s high, but can also appreciate in value.

Another common subject of discussion is the club’s long-standing grouse against Mercedes India, which it feels does not extend the financial support the club merits. “We deserve it,” says Turel, “Our activities, like the annual motorcade, are publicity for Mercedes.” Turel claims that such events cost around Rs 1 lakh each to host. “Currently, we manage with club funds and part sponsorship from auto dealers or [engine] oil companies.”

The chatter is also about other subjects. Members lament the hijacking of Shivaji Park by a certain political party, and one man talks about how he had to pay that party a crore when he started a business. But the passion for cars and Mercedes is genuine and always palpable. “I know people,” says Nayak, “who have broken their bank to buy a Mercedes.” Lionel Ritchie’s impulse purchase of seven Mercedes cars, news of which comes just as Open goes to press, would perhaps be another lively point of discussion among them.

The honour they accord the marque is evident in less dramatic ways too. Kiran Shantaram has photos with Maharashtra chief ministers and politicians on his office wall. He also has a mounted certificate on the same wall from Mercedes International. “That star,” Shanta- ram says, “is a star.”