Love and Longing on WeChat

How a generation is using messaging apps to score dates and, if lucky, hookups 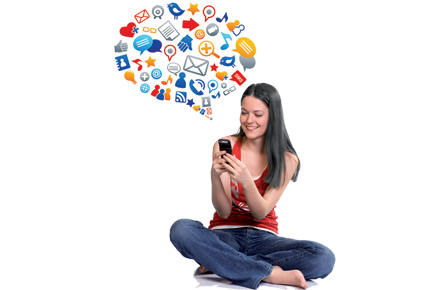 How a generation is using messaging apps to score dates and, if lucky, hookups

On a dark wintry evening in Gangtok, a cell phone screen flickers to life. “Oh,” says a young man in genuine surprise, the eagerness on his face lit up by the flickering screen, “it’s her, it’s her.” The ‘her’ is someone he met via the popular mobile messaging app WeChat. And after several days of wooing her and incessant pleas for a dinner date, which she had so far politely declined, the woman has for the first time initiated a conversation.

‘Willing to meet,’ she says.

By which point, the recipient is overcome with an adolescent excitement. His face is now glued to his phone and his thumbs tap at a frantic pace. ‘Tomorrow? How about tomorrow? Does that work?’

‘Dinner? Or what about lunch?’

‘Let’s try coffee. Will see if you are worth dinner or lunch.’

As appearances go, the young man has never had anything but her display picture to go by. Her dark straight hair, he can see, runs over and covers much of her face, except her eyes, which are outlined with kohl. He is sure she is pretty.

Their conversation lasts late into the night, flitting from careless banter to romantic innuendo. But as the night progresses, the young man takes on simultaneous chats with several other women. Many of them, he has never met, while some have materialised as live dates in the past. Some do not even reply to his messages. “There’s no harm in playing the field. I’m sure I’m not the only guy she is chatting with either,” he says, referring to the girl he is scheduled to meet the next day over coffee.

WeChat, which was founded and known as Wixìn in China, is one of many mobile applications that enable strangers to connect with one another. Ostensibly, it’s a ‘messaging service’ by which friends can chat and share pictures, music files and video clips, somewhat like WhatsApp. What WeChat offers additionally is its ‘Lookaround’ feature, which turns it into a location- based app, allowing strangers within a two-kilometre radius to pinpoint each other and get talking. All in all, the app comes in handy for those looking to score dates, and sometimes, when the dating gods are favourable, hookups.

There are other location-based apps too, like Tinder and Blendr, which are less subtle and work with the stated aim of hooking people up—often anonymously, with a lot of users letting only their nicknames and dummy photos appear on the app’s display panel.

In Gangtok, where nights set in early and youngsters have few options to socialise beyond family settings compared to other Indian cities, WeChat has become something of a rage. The young man who has got himself a coffee date is a former engineer who moved from Bangalore to Gangtok about two years ago, and started using the app around a year back. So far, he says, he has been on a number of dates, some of which have led to sexual encounters. But he has not been able to convert any of them into what he claims he’s really after—a meaningful relationship. “When I reflect on what I am doing, which is essentially scouring the app for women to hit on, I feel like shit,” he confesses, “But then all of these women are here also, right, and [presumably] for the same thing?”

As it turns out, he is not alone. According to Rakshit Tandon, a cyber security expert who keeps track of online trends and conducts cyber awareness programmes in schools, almost everyone is using messenger apps. Early teens, young adults, older folk, everyone. “Initially, I thought this was just a passing fad,” says Tandon, “But it has really become very popular. And many of the users, especially the young, use [these apps] to flirt with one another.”

Some have explanations based on social trends, like this young man who lived in Delhi and Mumbai for three years before shifting to Bangalore to work with an MNC; he ascribes the popularity of these apps to the loneliness of life in India’s big cities. He offers himself as an example: “After work, when I return to an empty house, there is nothing to do but sit in front of the TV and chat with strangers. I have no one else to talk to. And when I sign in, I find others like me.” He says he has met strangers on WeChat and Blendr and gone on a few dates with a few he found pleasant. Whenever he starts a chat, he asks the woman at the other end to send him either a voice message or photograph to confirm she is indeed a woman (and not a male prankster).

A few months ago, he slept with a woman he met on WeChat. “But these encounters are meaningless. However eloquent we are on chat, when we meet, sometimes there is nothing to say. Sometimes you meet and you think you had a great time, but you never hear from that individual again. There is something artificial about it all.” He also says he is trying to reduce the time he spends on these apps, but just can’t let go.

For research, I signed up on WeChat, Tinder and Blendr. The first of these has something of a 1990s internet chat room feel about it. On the cellphone, though, it is more immediate and pervasive. And its location-centricity, which implies the possibility of an in- the-flesh meeting and possible hookup, tends to give conversations a charge of sorts. Apart from Lookaround, there are two other features that let you cosy up with strangers. ‘Shake’, often described as a ‘booty call feature’, is one of these. To indicate you want new people to meet, you shake your phone; each time you do this, you get a list of every other phone shaken anywhere close at the same time. ‘Drift Bottle’ grants you access to ‘bottles’ with messages that have been cast away by people from anywhere on the globe, and you can start chatting with them. Of course, you may also want to set afloat a bottle with a message of your own that could wash up on someone’s phone who finds it interesting enough to get in touch. I met a number of people this way, a lonely Chinese tutor in Singapore going through a difficult marriage, a 14-year-old girl in Kolkata, and a schoolboy in Jaipur. They share intimate details of their lives, and send pictures and messages. They keep asking if I am around long after I quit replying.

Tinder displays photographs of people of the opposite sex within your striking distance. You can either slide them to the left of your screen, popping them into the bin, or to the right into a heart-shaped box of picks. If one of the women in this box also happens to approve of you, Tinder puts you in touch rightaway. No less blatant in purpose is Blendr, which lists everyone within a range who may be of interest to you along with their pictures and self-descriptions. You can chat, go through pictures, ‘like’ or leave a comment on any of the profiles. And every small action, even a visit to a page, sets off an email to the other individual, asking both parties to ‘break the ice’.

Rajat Rao, a young entrepreneur in Bangalore, says, “Two years ago, when I was in college, I needed people to introduce me to women. But that age is crumbling away. Now technology can do that for you.” In January this year, Rao along with some friends launched an Indian dating app, Krush. Every evening, a user of this app gets a list of ten names picked up from the user’s Facebook friends’ and friends of friends’ lists, along with their photographs and interests, with a compatibility quotient to go with each. All this hard work is done by algorithms that sift through data—job, location, interests, likes, etcetera—provided by those on Facebook. If two individuals pick each other from the selections on offer, Krush introduces one to the other.

According to Rao, Krush has been downloaded around 20,000 times on Android phones and made around 450 matches over the past couple of months. A similar iPhone app is under development right now. “There is a big cultural shift underway in India, especially in the metros,” says Rao. “People get into serious and casual relationships all the time.” To ensure that women in particular feel safe using the app, Krush is designed to ensure that every list they are on—and even those they are presented with—have some people with whom they share mutual friends.

According to a 29-year-old woman who lives in Delhi and is wary of chatting with strangers on WeChat, the problem is the obscenity she risks encountering online. But she is unsure of her commitment to her boyfriend, with whom she has been living for the past three years, and wouldn’t mind meeting someone new. She has met a few men via such apps, one of whom she has begun to meet frequently offline. “When I first started chatting with him, I found him patient and interested in listening to me,” she says. “We started sharing our stories and issues with each other. Gradually our relationship grew. Neither of us expects anything from this relationship. We know that we will one day stop chatting and go back to our lives.”

Tandon, however, worries about these apps. Last year, he had to counsel a 14-year-old schoolgirl who had sent topless pictures of herself to her boyfriend in school via Viber, another app. The boy had forwarded these to his friends. “When I asked her why she had done it, she told me, ‘He had been asking for it for days. And I didn’t realise he would forward them.’”

As for the man excited about his coffee date, he says it turned out well: they laughed a lot, went for a stroll in the city, and before parting, they made plans to catch up again. Since then, she has not responded to any of his fresh messages. It has been several days.