Ever wondered if you could convert the Red Corridor into a crafts corridor? Start from your living room or the kids’ playroom. 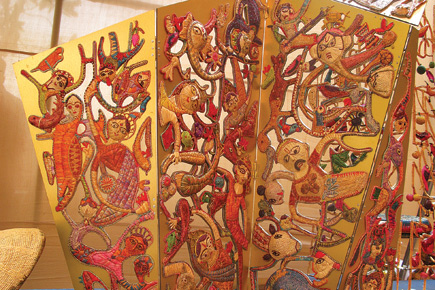 Ever wondered if you could convert the Red Corridor into a crafts corridor? Start from your living room or the kids’ playroom.


A billowy cloudlike lamp made of cotton imbued with an inner glow, modular tile frescoes with gods and hand-spun curtains where cranes are taking wing, centuries-old crafts from India’s poorest regions were reborn in a modern avatar early this year. Unlike commodities churned out by Chinese factories, these contempo-traditional products with an Indian design core brought urban consumers face-to-face with artists of our hinterland. Re-imagined by a progressive-ethnic credo, the golden grass of Sitamarhi in Bihar, once woven into baskets, is transformed into screens for goddesses to peep out. Earth-coloured leather-puppets from Andhra Pradesh have become foldout-chandeliers, eye-catching centerpieces that can light a modern-home with ancient legends.

Some 2,600 years in the making, ever since the birth of crafts-based settlements Mohenjo-Daro and Harappa, Jiyo!, an indigenous endeavour belonging to unknown artisans and performers of India, debuted in Delhi this April. The brand name is inspired by Mahatma Gandhi’s blessing, ‘Amar Jiyo’, in a letter written to Jawaharlal Nehru. Befittingly, its logo is based on the Mahatma’s handwriting. Without sentimental subsidies from the Government,  Jiyo!, whose motto is ‘believe, buy and belong’, is getting set to compete in a market economy with global designers. The initial aim is to provide livelihoods to economically vulnerable artisans, who live along the politically-disturbed Red Corridor that arcs from Andhra Pradesh to Bihar. Rather than harvesting their skills with cotton and silk yarn, well-meaning welfare schemes like NREGA have turned weavers into stone breakers for road projects.

“New merchandise is about a human face… conscious consumers are disclaiming what’s made by a machine, they want to know about the eco-footprint, empowerment and ethical values,” says Rajeev Sethi, chairman of Asian Heritage Foundation (AHF). This NGO, supported by the World Bank and Japan Social Development Fund, nurtured the birth of Jiyo! Holding open Dastakaar-e-Hunar, an Urdu book that maps Indian skills from soap-making to bee-keeping, Sethi says:  “There’s a paradox between poverty and culture. The poorer you are, the greater is the retention of culture. Hum gareeb desh hain, lekin hunar bohut hain (we are a poor nation but we’re rich in skills).”

To develop craft clusters that could become potential ‘legacy industries’, in 2006 a band of AHF designers fanned out in districts overlooked by the sarkar. These include the traditional toymakers of Etikoppaka, AP, lost baavanbuti weavers of Nalanda, and kinetic sculptors of Bastar. After agriculture, handlooms are India’s second largest employment sector. But the communities who have preserved our heritage and earned foreign exchange, whose art-fluent fingers can turn earth, grass, yarn and metals into objects of daily beauty, remain poor and backward. By harvesting the creative capital of crafts, Jiyo! has also cottoned onto a global trend. Stella McCartney, Gucci and Fendi’s new collections of raffia sandals, bamboo handbags and straw totes, are crafts-inspired. Closer home, Lecoanet-Hemant’s Ayurganic leisurewear, matches organic garments with Ayurvedic herbs and linaments.

“I knew nothing about Sikki,” (an auspicious grass) confesses Amitra Sudan Saha, an AHF designer. It took weeks of living in Sitamarhi to see how this golden grass deftly negotiates Bihar’s caste lines. “Sikki’s found at the end of monsoons, at the edge of ponds, and Musahars (a marginalised  community) harvest a single strand of Sikki from grass clusters.” This is soaked in water for a week, before each reed “is split with their teeth”. Sikki sunars, a business class, paid Rs 50 per kg of split grass, before giving it to women who’d weave it into deities and dowry-baskets used by local people.

The challenge lay in bringing this modern meaning to Sikki, while elbowing out middlemen who’d soak up profits but never invest in design. Saha and Sitamarhi women re-dreamt Sikki. When grandmothers looked in curiously, they were invited to teach teenagers. Together, they turned out simple 3D objects based on the cylinder (saap) and the dome (pyaaz). As their fingers fastened knots called churia (knife), dathuria (flower) and chotia (plait), goddesses appeared, Saraswati with a violet veena, flying apsaras, an enraged Durga. All of them were tethered to a screen called Devi, “a dedication to the ten women created this installation in 30 days,” says Saha. Besides traversing scale from small to soaring there’s a price-inflection: a basket gets Rs 150, a screen earns Rs 75,000.

In Muzaffarpur, AHF designer Swati Khalsi stumbled into sujani embroidery. Under the gaze of Chitriya Ma—Goddess of the Tatters—rural women would give ragged saris and dhotis renewed life by rippling running stitches over their surfaces. “We wanted women to connect with their inner artist,” says Khalsi. When she learnt Ruby Kumari and Amrita Kumari were embroidering to earn for their studies, she labelled this the ‘college fee’ collection. After initial inputs on design, colour gradations and layering, the women threaded their needles through fabric, turning chemises into indigo valleys and instilled dupattas with the silences of jade forests. “The hand has a brain of its own. No machine can take so much coding,” says Khalsi. Wrapped around a newborn, soft sujanis mimic a mother’s embrace. Today, this household art also has a grander capacity: to educate and liberate young women.

Artists like 24-year-old puppeteer K Anjana, from AP’s  Nimmalakunta village, knew they had to step up to today’s times. Having used shadows, light and puppets to narrate the Sundarkanda and Lanka Dahan incidents from The Ramayan in village chowks, he admits his audience has dwindled. “Everyone wants to see cinema.” So he and a band of 60 puppeteers joined Jiyo! “Even if we’re making lights, our items are traditional,” says Anjana, stroking on vegetable paint to draw out Raavan’s menacing moustache.  As lovely as those shadow-chandeliers are the fact is this new form is divorced from its original context: storytelling about heroes and demons. Anjana disagrees, “Seventy per cent kahani mar gaya hai (70 per cent of the story has died), and we perform what we can remember.” Rather than earning intermittently from puppetry, “we get constant employment from Jiyo!” he says. Jobs have a deeper meaning in AP. Though Naxals are in retreat here, in neighbouring Bastar their writ runs.

Recognising what’s seething under the surface, Jiyo! is an attempt to re-map the Red Corridor into a crafts-corridor. Rather than guns and grenades, Jiyo! is offering artisans here a lifeline. Sethi noticed unrest brewing when tribals refused to sing the national anthem in Kalinga, Orissa, 20 years ago. “Let’s not have a false notion that the Red Corridor is insulated. It is permeating fast into every city street. What can people do when they have education but no options? He believes “something prevents an artist from picking up a gun”. That’s why Jiyo! is reaching out to the pickle makers of Guntur, toymakers of Kondapalli and weavers of Nalanda, “who live in a sea of poverty”. In Madhubani, Sudha Devi “incarnated into a goddess before my eyes”, says Arghya Ghosh, AHF designer. “She can visualise exactly how a snake could become a fish, a tree or a branch, in modular wallpapers.” She’s also a goddess with an income.

Mega-brands are listening to the word Jiyo! and hearing a world-vision in it: geo. Louis Vuitton will showcase Jiyo! products worldwide. Ritu Kumar, Tarun Tahiliani and Rohit Bal want to include Jiyo! products in their boutiques. Painted rickshaws will soon directly retail this designerware. The Commonwealth Games will be another sales window. Slowly, the unknown artists of India, the holders of reeds, brushes and looms, will have an economic stake in the future, as much as us manipulators of the mouse. For this indigenous enterprise to succeed, to be contemporary and relevant, all we need do is live and let weave.