Let’s Do as Cavemen Do

John Durant promises to restore you to the pink of health, caveman-style 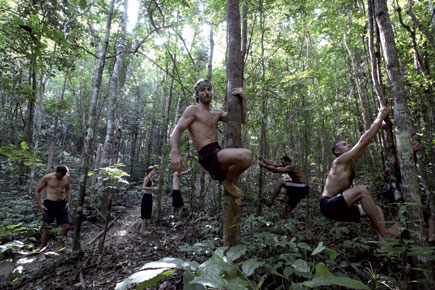 John Durant promises to restore you to the pink of health, caveman-style

It is noon on the coldest day of December, and heavy snow lashes the sidewalks of Manhattan’s NoMad district. Everyone and their dog is hurrying past the snowdrifts dressed in fur-lined hoodies and Michelin-man swaddling, except for one young man with wild shoulder-length hair, dressed in track-pants and a white hooded sweatshirt, who lopes past them and disappears into a tall building. That would be John Durant, one of New York City’s most popular Paleo leaders.

Durant began his journey to cult caveman status in 2010 with two big, splashy media outings. First, a New York Times profile entitled ‘The New Age Cavemen and the City’ in which he and his 3-foot- tall meat locker (containing organ meats and bits of a deer he’d shot himself) had a starring role. The piece chronicled his activities as the founder of Paleo NYC and ‘chieftain’ among East Coast cavemen, hosting Paleo potluck dinners at his apartment and going on barefoot—and bare-chested— runs with fellow cavemen across the Brooklyn Bridge in the dead of winter. This was followed by an appearance on The Colbert Report, in which Durant, sporting toe-shoes and an elvish ponytail, regaled Stephen Colbert with his description of the ideal ‘Mrs Caveman’: “a healthy woman who’s a meat-eater, and, ideally, lactose intolerant with celiac disease.” As Colbert told the audience: “If you can’t process modern foods, this is your caveman!”

Everyone might have laughed then, but the Paleolithic trend caught on like a mammoth in a fire pit, as did foraging, slow-food, the locavore movement, and artisanal butchery; all fuelled by a repulsion to over- processed industrial Frankenfoods chock-full of “mystery ingredients”, as Durant is fond of saying. Now, blogs on ‘Paleo cooking’ abound, filled with recipes for bunless burgers and flourless cookies, as do book deals. Since its inception in the 1960s, the ‘Paleo diet’ has defined itself best by what it forbids— foods of reputedly post-Paleolithic provenance such as grains and legumes like soy, wheat, corn and beans, and most certainly, processed sugar, dairy and sodium-saturated industrial snacks.

Such proscriptions make the Paleolithic lifestyle especially appealing to sufferers of diabetes, celiac disease or Crohn’s Disease. But Durant came to the hunter-gatherer lifestyle by a rather different route. While he was a freshman in college, a break-up left him low on energy and confidence, and with a constant, only half-literal hungover feeling. His brother passed on an essay by Arthur De Vany, an economist and advocate of ‘evolutionary fitness’, who eventually became a Yoda figure to modern- day Paleo buffs.

In the essay, De Vany pointed out that our present-day metabolism is a relic of our ancestral past as ‘adaptive opportunists’, and reasoned that mimicking the eating habits and activities of our hunter-gatherer forbears would make us thrive. ‘Learn to be a good animal’ and follow what you’re evolved to do, was De Vany’s advice. Durant gave it a shot, and found that being a good Stone Age-era animal vastly improved his energy levels, motivation and immunity, and did away with his acne and excess weight. The physically and psychologically transformative experience inspired him to change more than his food habits. He ended up majoring in evolutionary psychology under cognitive psychologist Steven Pinker.

Six years into the Paleo experience, Durant remains convinced that finding ways to replicate a return to the life of a hunter-gatherer in the wild is a genetically, evolutionary sound decision, one that will make allergy-prone, obese, sedentary modern-day folk happier, healthier, confident and active. Echoing Jared Diamond’s declaration that agriculture was ‘the worst mistake in the history of the human race’, he sees the transition from cavemen to settlers 10,000 years ago as a Fall of Biblical proportions, leaving us with rotted teeth, softer bellies, a shorter stature, allergies and poorer immunity.

Durant’s book The Paleo Manifesto, released in September, has a chapter that tracks the Biblical Fall from references in Genesis through Exodus in the Old Testament. ‘These early herder-farmers had a memory that goes something like this: Life was good. We ate something we shouldn’t have. Now life is bad,’ Durant writes (italics his). The rest of his book charts a detailed route to a prelapsarian state of health, through fitness, diet, sleeping habits and thermoregulation. This entails ‘primal’ exercise like barefoot running, as if pursued by cave bears, and exercise regimes like the wildly popular CrossFit, which emphasise strength, variety and functional movements over the robotic narcissism of regular gyms. Durant is also an ardent follower of the French MovNat, an outdoor exercise movement which involves playful, natural movements— swimming in rivers, sprinting through bushes, balancing on logs and tossing rocks, presumably at imaginary beasts. He also advises working at a standing desk to remain alert and assertive.

A rough-and-tumble exercise regime goes with a high-protein, high-fat diet: eating pasture-raised meat or game you hunted yourself ‘from nose-to-tail’, rich broths from leftover bones, seasonal vegetables cooked in animal fat or coconut oil, fish, salads, nuts and berries. Durant also advocates fasting intermittently, like cavemen might do from kill to kill. As his state of under-dress suggests, he also believes in relying on natural ‘thermo-regulation’: bracing ‘Polar bear swims’ off Coney Island in the dead of winter, and bouts of sweating it out in the Russian baths in East Village.

“My habits might sound eclectic,” Durant says, “but a common theme runs through them: adding a sense of meaning to anything you do, whether it’s food, or exercise, or sleep.” We are at Manhattan’s biggest and oldest CrossFit Gym, where Durant is about to restore meaning to exercise. It’s a sweaty, frenetic affair that takes place to angry rap music. “That’s one way in which it’s different from other gyms, which play pop or club music,” says Durant, bandaging angry purple calluses on his palms in preparation for pull-ups, which are part of the workout of the day (‘WOD’ in CrossFit parlance).

The gym is located on the second floor of a high-ceilinged loft with enormous windows. At the far end of the room, where a class for advanced athletes is in progress, a bearded ogre skips propulsively, sporting a hefty weight belt around his midsection, and a woman with exquisitely sculpted shoulders lifts a 45-lb barbell several times with practised ease. Durant’s workout today, ‘fight gone brutal’, is for intermediate CrossFitters. The instructor arrays them in rows of three: rowers, squat-leaps, pull-ups, box-jumps (skipping on and off a carton), and an upside- down ‘wall-crawl’. The routine resembles a circle dance in structure: it’s the same sequence of activities, performed with progressively rising intensity until the end of an hour, when the corner of the room is a merry din of skipping ropes, rowing machines, and clattering cartons. (CrossFit gyms haven’t exactly endeared themselves to their Manhattan neighbours. An Upper West Side attendee was briefly accompanied on a sprint by an irate elderly man who kept up pace to shout, “Your gym is awful!”)

Afterwards, we move to a nearby Chipotle for lunch. Ordering Paleo-friendly meals is reputed to be a minor form of OCD, and Durant is determined to prove otherwise. The finished product is fairly fuss-free: it’s a salad made of chopped romaine lettuce and a bit of white rice, topped with steak and shredded beef, with lashings of guacamole and heavy cream. As he rapidly scarfs it down, he tells me he never wants to hear another caveman joke: “I get them all the time. They’re unending,” he says. “The two most common ones are about the caveman approach to dating—with a club, and then, anytime I use something [modern]—they go, ‘Cavemen didn’t have phones, or forks, or leather jackets.’” The jokes extend to his treatment in the press, he says. “I can talk about evolutionary biology for two hours, and the piece will come out, making me out to be a barefoot, loin cloth Tarzan. So anthropologists who read that don’t realise there’s more sophisticated thinking behind it.”

Earlier this year, the book Paleofantasies, by the evolutionary biologist Marlene Zuk, took aim at the odd specificities of the movement’s foundational myths— what she terms ‘paleo-nostalgia’—asserting that there was no ideal time in evolutionary history in which ‘body, mind, and behavior was in sync with the environment’. In a TEDX talk last year, Christina Warinner, a researcher in evolutionary medicine, emphasised that the Paleo movement’s ideas had “no basis in archaeological reality”. She pointed out that Paleolithic peoples’ diets were not uniformly meat-heavy, nor necessarily grain-and-legume- free, and that what they ate varied dramatically according to season and geographical location. She added that 7 billion people could not live as foragers, and that in any case, all foods prescribed by present-day Paleo experts were the product of thousands of years of domesticated farming—like bananas, whose wild ancestors were riddled with seeds, or avocados and olives, which originally contained a bare minimum of fruit.

On Scientificamerican.com, Ferris Jabr, a science journalist and editor who writes on neuroscience and evolution, gave Paleolithic principles a thorough filleting in an article entitled, ‘Why the Paleo Diet is Half-Baked’. Jabr averred that the movement suffers from a bit of selection bias, only assimilating research that suits its hypothesis. For example, it doesn’t address evidence that implies that hunter-gatherer groups suffered from so-called lifestyle diseases, such as a recent paper in Lancet in which paleocardiologists examining 137 mummies across four geographical regions and 4,000 years found atherosclerosis (fat-clogged, narrowed arteries) to be common in all four pre-industrial populations, including pre-agricultural hunter-gatherers. Nor does it take into account examples of rapid and relatively recent evolution that illustrate that our anatomy and genetics have not been set in stone since the Stone Age, such as lactose tolerance, which we evolved 7,000 years ago. Jabr concluded that the Paleo diet was ‘founded more on privilege than on logic. Hunter– gatherers in the Paleolithic hunted and gathered because they had to. Paleo dieters attempt to eat like hunter–gatherers because they want to.’

Whether due to choice or compulsion, nobody, least of all evolutionary biologists, would disapprove of a diet that eliminated sugary treats with no nutritive value or snack foods dosed with harmful amounts of sodium and preservatives. But the Paleo movement’s increasing popularity, influence, and self-assumed authority has attracted some concern among academics across several fields.

According to Durant, though, the idealised cavemen critiqued as mascots of a fad diet are mostly straw men. Nor is he inordinately concerned with the impossibility of aspiring to an authentic Stone Age diet. Durant sees himself more as a zoo-keeper experimenting with his diet and habitat, like the captive gorillas in the Cleveland Zoo he discusses in his book, who were cured of heart disease, obesity and behavioural problems when zoo keepers stopped feeding them high-fibre ‘gorilla biscuits’ and gave them a diet of vegetables and greens, a store-bought approximation of what they ate in the wild. Or, better still, like a ‘biohacker’ performing a self-experiment, switching out what doesn’t work, and leaving room to accommodate new research. In his own words, “Waiting for scientists to reach a consensus is waiting for your own funeral. There’s no such thing as perfect—no perfect diet, no perfect exercise, no perfect lifestyle. Unconcerned with perfection, biohackers adopt smart rules of thumb that stand a decent chance of being more or less right.”