Single-child families are increasingly becoming the norm in urban India. 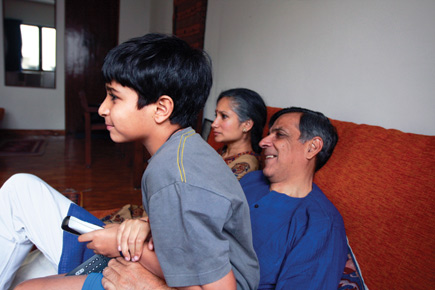 Single-child families are increasingly becoming the norm in urban India.


When he’s barefoot, even in his size five sneakers, it takes 11-year-old Kedar a few strides to get from his peacock-blue room to his parents’ white bedroom. This is where he sleeps on a rollout because “my den’s too noisy at night”. He’s padded across this wooden floor for years, many times a day, without a sibling whooping loudly “me first” and somersaulting onto the mattress before him. A tween, uninterrupted by sisters and brothers, Kedar’s is a solo-world seen in simple glimpses, a single bed unshadowed by an overhead bunk and his solitary blue-and-white toothbrush in the loo. The board games stacked on the top shelf of his cupboard aren’t a daily stretch. Since most games need two or more players, this chubby brown-eyed chap only clambers up to haul out Twister and Monopoly “on Saturdays, when my friends come over to play”.

Though the rules never say so, as some of us know, to do well at sports and games—it helps to have a little sister you can bully at Cluedo, a brother who’ll be udaiya when flying kites, and a sibling who’ll teach you how to trounce anyone at rubber band fights. Though he has a ping-pong table at home, Kedar often thwacks the ball against an unmoving challenger, “I play against the cupboard, or with Pa when he’s free,” he says without a shade of complaint. From ball games and pillow fights to the eyeball-war over the last kebab, siblinghood moments are slowly fading as the single child family comes into the urban spotlight. Be it late marriages, biological frailties, careering or total contentment with a single child, more and more families like the Delhi-based Satyanands are revolving around the one and only one who can bring the most luminous smile to their faces.

Outside Kedar’s room, leaning back on a lilac sofa, Premila Nazareth Satyanand, in whose profile you can trace Kedar’s lips and jaw line, says she hadn’t planned on one-only. “I used to dream of four rowdy boys, running about a farm,” says this writer on foreign direct investment. Sprawled beside her, tall and lanky Mohit, whose light-eyed blink echoes Kedar’s, confesses, “Even when I was supposedly a confirmed bachelor, I had a premonition that I’d have a really close relationship with my child.” Since that premonition turned into reality, this free-thinking duo have lived life in parent-thesis that’s been sometimes stifling but mostly warm and embracing, as their 12-year parenting journey wound around the hills of Kumaon and all the way back to Delhi.

“Mohit’s house in the hills of Satoli was our courtship motif, the place where we wanted to live after marriage,” says Premila. Yet when Kedar came along after two years in Satoli, absolute motherhood was an absolute shock. “I felt I’d been thrown into a deep well with an iron ball tied around my legs. I had no career, no help and a child who only wanted me, not his father.” To scramble back to sanity, she decided “only one child, why overreach just to prevent a child from being siblingless”. Mohit, an investment consultant, trekker and theatre-person, hadn’t fixed on a family number. Alive to Premila’s trauma, even now after it has long subsided, Mohit says, “I only joke about a baby girl.”

“As a newborn, Kedar used to stare intensely at his fingers,” says Mohit in his smooth deep baritone. Holding those hands before his face now, Kedar shows off the traits that characterise him as the Nazareth-Satyanand gene-junction: “I have my father’s long fingers, I’m short like my mother, and my nose is like my grandfather’s.” Beyond these likenesses, are deeper psychological semblances. Mohit says, “I was born to a much older father, and there I was 44 when Kedar was born.” Within one generation, a noun, parent, had turned into parenting, an active 24/7 verb. Mohit’s age added a silver inflection point and quandaries: “How could I love him without spoiling him? How could I stop my love from deteriorating into indulgence? How could I protect him from the strength of my own personality so he’d make his own decisions?”

These terms of endearment were translated right from his toddlerhood in Satoli, where Kedar was saturated with affection not just from his Ma and Pa, but from the entire village who loved this cherubic child who’d gleefully run up and down the hills, play pitthu and sit under the trees. But when it was time to go to the village school, it was so below educational standards that “it wasn’t even worth the walk”, says Premila. Mohit and she decided to homeschool Kedar till age 12.

That utopian idea frayed as they watched their four-year-old being “treated like a little lord”. Several sleepless nights later, Premila decided it was time to return to Delhi so that Kedar would be more than “sahib’s child”. Mohit didn’t entirely agree. He says, “One child won’t turn the world into a classless society. The homeschooling would’ve worked, but I didn’t want to take an antagonistic stand.”

Today in his red T-shirt and soccer shorts, Kedar doesn’t stick out on the streets of south Delhi. He blends into a crowd of elite school-going kids, who like Playstations (PSP), pizzas on call and Linkin Park playing loud in their earphones. But he’s discriminating. He’ll choose a book over the company of someone he doesn’t like too much. He likes aloneness. His father says, “He gets that from me: though I was the middle kid, I was content being on my own.”

Though he’s sidestepped sibling squabbles, Kedar is good with sharing his PSP, toys and collection of well-catalogued thrillers by Michael Crichton, Anthony Horowitz and The 39 Clues series. He’s clearly aware of his own prowess: “I can beat anyone at a PSP shootout.” When asked how badly he’d like to have a sister or brother, his hand clutches his sleeves before he answers honestly, “It’ll be nice for sharing scoldings.” Clearly he’s not ready to share Ma and Popsicle, as he calls Mohit affectionately.

Sometimes, suddenly when aloneness swamps Kedar, “He’ll run up, hug us and say, ‘Why didn’t you marry earlier so we’d all have had more time together?’” says Premila. While there’s no staving off those fears in his little mind, his parents have been trying to create a universe for Kedar, one that they hope will endure: “A bond with his cousins and friends so they become de facto siblings,” says Premila.

In Satoli, which they still visit every holiday, this single-child family is perceived as peculiarly single. “But they leave me alone because they think of me as a modern working woman,” says Premila. Here in Delhi, it’s only some family elders who do mention pointedly, “Kedar needs a sibling.” Meanwhile, Kedar’s oneness is easily disguised within togetherness each day when there are three table mats at the Satyanand dinner table. Of course, every morning when he wakes up, there’s just the solitary blue-and-white toothbrush that stares him in the eye. “I sympathise with Kedar that he has no sibling, but feel no regret,” says his Ma. She and Popsicle are content with their closed parent-thesis; it’s one that curls around Kedar and Kedar only.