Easy to lead and never lonely: that’s life inside a retirement colony 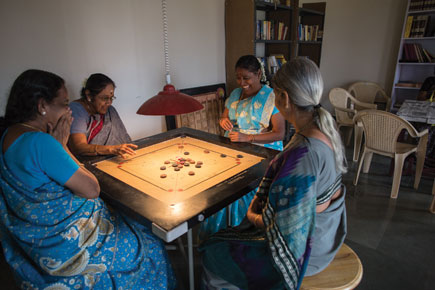 Easy to lead and never lonely: that’s life inside a retirement colony


Besides the drone of the TV set, there is no other sound in the three-bedroom villa—no pressure cooker going off in the kitchen, no honking from the street outside, no doorbells rung periodically. On the first floor of the villa, 75-year-old R Radhakrishnan’s desk has a clutter of papers and audio cassettes. This is where the man who retired as managing director (Asia Region) of Tata McGraw Hill Book Company spends most of his time, either tracking the stockmarket or patiently digitising his collection of Carnatic music cassettes.

Unlike their Delhi home, where the Radhakrishnans initially settled after he retired, this villa on the outskirts of Coimbatore is far from the hustle of city life. Radhakrishnan calls his residence “resort like”. It is located in a gated colony called Soundaryam nestled in a coconut grove and with a view of the Western Ghats. Once you pass through the colony’s arched entrance, the outside world practically ceases to exist. You see rows of neatly laid out villas, each with a little sit-out and garden. They all have one thing in common: their residents are 55 plus.

“Living in a city like Delhi gets tougher as you grow older,” says Radhakrishnan. “There were concerns about living in a smaller place and in a colony where interaction with younger people would hardly be there. And of course, there was great resistance from the children. But the benefits of living here far outweigh the negatives. Moreover, at this age, we don’t miss the glitter of a big city.”

An increasing number of senior citizens seem to agree. Across Coimbatore, which has India’s largest concentration of such ‘assisted living’ enclaves, residents vouch for how it works like a ‘well-oiled machine’. Such housing projects are usually aimed at the upper middle-class, and houses can either be bought or taken on lease for, say, 20 years. Some also have houses for rent. Every colony is professionally maintained, with a package of services—ranging from food, healthcare and security to social engagement and concierge services—offered on a monthly payment basis. The idea is to ease the lives of the aged. A common kitchen serves hot meals in a dining hall or delivers them home in tiffin boxes. A lounge doubles as a reading room and provides common space for discussions on politics or religion. The scenic surroundings inspire brisk walking. In some cases, bank officials even make monthly trips to these colonies for residents to do their bank work at home.

“What more does a 75-year-old need?” asks Radhakrishnan.

A recent report by Jones Lang LaSalle on the senior/assisted living sector in India estimates that by 2025 ‘there will be 173 million seniors above the age of 60 compared to the 76 million today’. It places the country’s current demand at about 300,000 units. Worldwide, senior housing is a $25 billion market, and the Indian market is expected to form an expanding slice of that pie in the years ahead. Already, there are about 30 senior living projects across the country, and another 30 or so are reported to be coming up.

By way of choice, a buyer could opt for a modest 500 sq ft studio apartment or spacious 2,500 sq ft villa with three bedrooms. Their prices range from Rs 25 lakh to Rs 1 crore. Maintenance charges are typically calculated on a per sq ft basis and can vary from a monthly Rs 3,000 to Rs 20,000 per person. By one estimate, daily food charges in Coimbatore’s colonies average Rs 100 per person.

According to the LaSalle report’s author, B Sridhar, national director of the real-estate agency’s social infrastructure practice in India: ‘The entire structure of senior living today is designed keeping in mind the requirement of seniors. The layouts of units, architectural aspects such as grab-bars in bathrooms, anti-skid tiles, low-height shelves and servant rooms in bigger units indicate a conscious shift in the development community towards the needs of seniors and growing size of this industry.’ The report states that while most projects are aimed at the market’s ‘affordable segment’, demand for luxury housing is also emerging.

The sector, which was pioneered in India by small companies and trusts, is now seeing the entry of large developers. Tata Housing recently announced plans for Riva, its first retirement colony project in Bangalore. Bahri Estates is midway through the construction of Anandam, a retirement colony in Kodaikanal. Wellness Commune is developing a 300 cottage colony near Sriperumbudur. Condominiums are coming up on the outskirts of Kochi, and retirement villages are planned in Mumbai and Delhi as well. Hyderabad, Pondicherry, Chennai, Panaji and Jaipur are other cities where similar projects are expected to lure the ageing and aged to come and live.

AV Ramaswamy, a 78-year-old retired Unicef official, began toying with the idea of something “beyond an old age home” in the early 1990s, right after he took voluntary retirement from a job that saw him travel the globe. “I don’t belong to Coimbatore, but came here on the insistence of a dear friend who was a childcare welfare expert,” recalls Ramaswamy. “I used to spend a lot of time at Swami Dayananda Saraswati’s Annaikati ashram. I would see a lot of retired people from all walks of life coming here on vacation. And I realised that in your old age, even if you have money, you can’t manage [life] alone.” And so Ramaswamy came up with the blueprint of a gated community and formed a trust in 1999. He called it Vanaprastha and built 50 dwelling units. “All of it sold out on the first day,” he says. The project’s success inspired him to start three more such colonies and even live in one of them. “There are a few primary concerns that the elderly have and we make sure they are taken care of,” says Ramaswamy, who is often consulted by builders that want to start such projects of their own. “We have a clinic manned by doctors from morning to evening, our food is basic but nutritious, and we ensure that everyday chores don’t become a burden for the elderly.”

Ten years after Ramaswamy first thought of an all-needs-met enclave for the elderly, Colonel (retired) Achal Sridharan felt the need to move from a “typical real estate and construction company” to building and maintaining retirement communities. “The need was felt around Y2K, around the time of the information technology boom, when a lot of children were moving out of their homes and leaving their ageing parents behind,” says Sridharan, who volunteered to work at an old age home after his retirement in 1995. “I sent out a questionnaire to an e-group I had created asking friends what they thought of a senior citizen’s colony. There was a lot of response, and unlike in the movie Baghban, we realised that the middle-class [elderly] like their independence and don’t necessarily want to stay with their children.” Sridharan chose to sell the houses he made and then set up a separate company to oversee the running of these properties.

Says M Sudhagar, estate manager of Shenbhagam Estates, a colony built by Sridharan’s Serene Retirement Communities: “I have become ‘the son’ for residents of the 73 villas here. My job is not just to make sure that meals are ready on time and housemaids work efficiently. It also includes listening to residents, taking care of their health and trying to sort out all the disagreements over the menu.”

The meal menu is a major point of discussion in almost every colony. For an average Rs 100, residents get tea or coffee, breakfast, lunch and dinner. “Food is a very contentious issue,” admits Sridharan. “Food committees exist with residents on board, but you will always hear things like ‘This food doesn’t taste like my wife’s cooking.’ Over a period of time, we have devised menus that are acceptable to a majority. But in the early days, my wife had to go and sit with the ladies and sort out complaints.”

Over a lunch of fried rice, chapaati, dal, rasam and curd, one can still hear the odd grumble. “The chapaati should be softer” and “Why fried rice with rasam?” are part of the lunchroom banter. The attendant responds only with a smile. All houses come with a small kitchen and residents can cook something extra if they want. But this is usually discouraged. “We have had cases of people forgetting to switch off the gas sometimes,” says Sridharan. “We are looking at other options—like induction stoves—in our newer projects.”

Radha Vanchinath, 79, doesn’t mind the food. “I never liked cooking,” she says. When she was looking for a place to settle down after her husband passed away, she had one specific requirement. Besides the finances, locality and design of the house, she was also looking for a place that didn’t have long dining tables. She didn’t want to sit in a row and eat like she used to as a child in her school hostel. She found the dining hall she was looking for at Shenbhagam Estates. It has no long tables, and she gets to eat in what she describes as a “restaurant like” atmosphere.

“Having spent most of my life in Mumbai and Bangalore, I was looking for a place that would give me the support I needed in old age and also let me keep my individuality intact,” says Vanchinath. “I have no children and didn’t want to live alone in Bangalore. This little villa is my home and all the residents of this colony are my extended family now. Time just flies here.” She couldn’t be happier.

Residents of these gated communities will emphatically tell you that these are not old-age homes. They will tell you how long it took to convince their children and relatives that they were going to a happy place, not a depressing one. “Most people who are unaware of this concept expect us to be huddled together and sitting sadly. Even our children initially thought we were moving to an old-age home,” says Leela Krishnamurthi, who retired from the Reserve Bank of India in Mumbai and chose to settle at Brindavan Hill View in Coimbatore. “But we are not, and moreover, we are here because we choose to be here. We were running a race in Mumbai. It tires you. What could be better than living in a place with a spectacular view of the Western Ghats and good company? Also, I don’t have to cook.” She occasionally does miss Mumbai, but a group of Hindi-speaking neighbours more than makes up for it.