Lured by adverts of English-speaking classes, I enrolled in one. This is what I remember 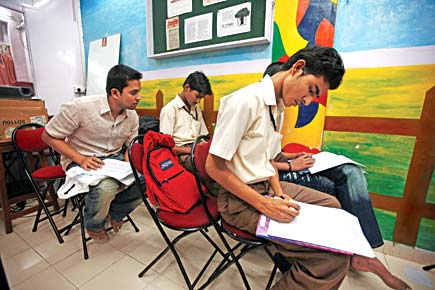 Lured by advertisements of English-speaking classes, I enrolled in one. This is what I remember of what I learnt


PROFESSOR AVINASH slung the worn-out black bag across his shoulder and struck an exaggeratedly silly pose. “Is this how you will carry your laptop if you go for a formal introduction?” he asked the class. There was laughter. Professor Avinash told us that for formal meetings, the bag must be in our hand.

It was the 9 am to 10 am lecture at Hi-Fi English Speaking Classes in Ghatkopar. We were getting lessons in body language and conversational skill from Professor Avinash, the founder of these classes. He resembles actor Abhinav Chaturvedi, who played Nanhe in the TV series Hum Log.

Hi-Fi stands for ‘Help Indians For India.’ The institution claims, ‘Speakers Are Not Born But Made By Us.’ Its signs are painted at various spots along Mumbai’s Central Railway line.

Professor Avinash assigned us a drill and watched from the rear of the classroom. Two students
participated in the exercise. One had to be the manager of ICICI Bank. The other, carrying a non-existent laptop, had to enter the manager’s cabin and introduce himself or herself.

The professor’s swivel chair and desk were near the blackboard. A blazer was draped over the chair and a pair of gold-rimmed sunglasses on the desk. The ICICI manager had to sit in the chair. “Go ahead, it’s for you,” he said to the first student. “Wear the blazer also if you wish.”

The slender girl was not audible. “Ma’am ne aaj chai nahin peeya (Madam has not had her tea),” Professor Avinash said. Another student spoke too fast. “Are you Rajdhani Express? Slow down,” he recommended.

I had enrolled at Hi-Fi fascinated by the name. I told them I was a coaching assistant at a badminton centre in Andheri. The chief coach, in case they asked, was the legendary badminton player Steven Spielberg. They bought the story.

Our photographer, Ritesh, was finding it harder to break in. The front office was acting difficult. Finally I told Professor Avinash that Ritesh was a photography student doing a project on different types of learning. Could he take some pictures at Hi-Fi? He agreed immediately.

Ritesh spent the morning trying to locate the place. On finally getting there, he mouthed an expletive involving carnal activity. I sent him an SMS asking him not to speak to me in English.

Maintaining a straight face became tough when he started shooting pictures. The professor, meanwhile, quietly improved his posture on the swivel throne, straightened his spine, brought finger to chin and elegantly crossed his legs.

Professor Avinash was a friendly teacher. Sometimes, though, he would snap. In an earlier class, when a boy did not write a homework essay, he admonished him, saying, “Did you make a gentleman’s promise or a bundleman’s promise?” In Marathi, ‘bundle maarna’ means ‘to fib’.

I had kept a gentleman’s promise. I had written my essay. From the dais, I read it out. It was about our class travelling to Goa on the Hi-Fi Express and staying in Hi-Fi style at the Taj Hotel. About swimming in the hotel pool and emerging so hungry that ‘mouses were running and doing Olympics in our stomachs.’ It was appreciated.

Hi-Fi Classes operates in a small space. The classroom seats about 25. There are two ACs, though. The office, which is but a corner of the classroom, has a photograph of Professor Avinash with former Maharashtra Chief Minister Manohar Joshi. There is a pencil sketch, perhaps made by a child, of an airline named Let Airs.

Many of the students were collegians who had schooled in regional languages and were having trouble with an English curriculum. Some of the grown-ups wanted to improve their job chances.
Professor Avinash was a multi-tasker. At times, he heard our answers while carrying on a telephonic conversation. You thought of Bill Clinton. It is said the 42nd President of the US could discuss the Palestine situation with Arafat on the phone, solve a crossword, nibble a pizza and enjoy an intern’s affections, all at the same time.

He told us to say ‘wull’ instead of ‘well’, ‘olthough’ for ‘although’ and ‘cotch’ for ‘caught’. I can’t wait to use all this on my boss, the legendary badminton player Steven Spielberg.