Have You Been to Krabi?

Why you must not waste time on Bangkok 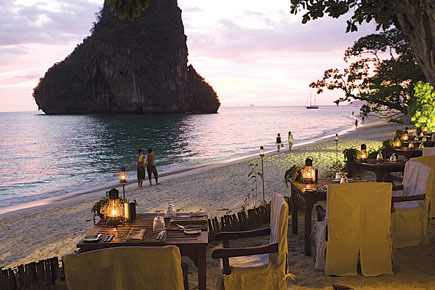 Why you must not waste time on Bangkok


This part of Thailand is Kerala with a lower suicide rate, and comes at a 50 per cent discount. Krabi, a province that lies on the southwestern coast of Thailand, by the shores of the Andaman Sea, combines the pastoral beauty of Kerala, the cultural informality of Goa and the spectacle of limestone hills rising from the sea that has no comparison, all this at costs that even the Indian hockey team will find reasonable.

Krabi town is part of the Thai mainland and it is a good base from which to explore the many busy beaches and spectacular islands. This is an ideal place for a 10 day vacation (if there is love between companions, and you are carrying an iPad to keep children hypnotised). You do nothing much here but amble around the market streets and beaches, and eat several meals a day (Thai food is somehow so light that even as you eat you may feel hungry again, at least that was the case with this reporter). And go on day trips that include visiting almost identical islands, snorkelling and deep-sea diving in outlandish spots. It is best not to agonise much over which islands to visit (though everybody there will say, “go to Phi Phi”, and you may seriously consider that with no harm done).

The Thais have a natural and fundamental need to be clean and aesthetic, and so even their low-end hotels, starting from about Rs 500–1,000 a night in Krabi, would not depress or disgust, an Indian especially. While such hotels are best booked when you reach Krabi, the better hotels can be booked cheap through sites like Agoda.com.

Among the most luxurious hotels in this region is the Rayavadee, which is on an island with very popular beaches and rock-climbing spots where the best in the world congregate. It is common to see young budget tourists, girls more than boys for some reason, stand on the beach and stare longingly at the entrance of the Rayavadee; and the residents of the Rayavadee, usually much older, staring back in smug blankness.

The Rayavadee, which has different rates depending on the season and demand, is a cluster of cottages set on a landscaped plot that in parts resembles a Malabar forest. It is the type of place where the horizon of the swimming pool is the sea beyond, and girls in bikinis are miraculously all alike.

Affluent Indians are used to a high level of hospitality in India and they are usually troubled by the poor quality of service in the West, where waiters do not realise that they are supposed to be lowly and reverent. But even Indian hospitality is no match for the Thai. Without losing their dignity even for a fleeting moment, Thais will make you feel cozy, successful (and loud and big). If you are staying here, you may try their  wind-surfing lessons, which are free on some select days. But their sightseeing trips are meant to fleece people for whom money is no matter.

Even if you are not staying here, it is a good idea to visit their restaurants, which are among the best in the region, and they are about half as expensive as 5-star restaurants in India.

Dining on the streets of Thailand is a generally enjoyable experience (including the period long after you have eaten), and even vegetarians will have much to look forward to. It is not the food that is the problem but ordering the food that is difficult. The English of Thais is quite terrible. You may notice that they interchange ‘R’ and ‘L’ when they speak. But this does not mean that you must ask for ‘Flench Fly’ as they do get offended if others speak like them. They generally do not get angry with tourists even when provoked, but if they feel humiliated beyond a point, they can get a bit violent. It seems they can run very fast too, so it’s best to avoid reaching this stage.