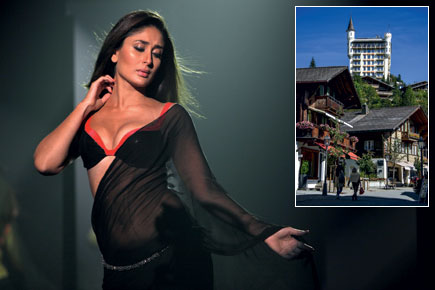 
It has taken three months to get to this point. It is 5 pm on a Friday. I am standing outside a Bandra high-rise, and mentally going over my trying-to-be-different questions for Bollywood’s leading actress. I am wondering what I can get to know about Kareena Kapoor Khan that nobody does. The past two months’ newspapers and magazines have been full of her wedding with Saif Ali Khan and her movie with Madhur Bhandarkar, Heroine.

She is sitting at a huge study table working on her laptop. It is a messy table, with books and newspapers fighting for space. Miles Davis is playing in the background. She looks slightly sleepy and smiles slowly before asking if anyone would like some tea. She is dressed in a green tanktop and jeans and is barefoot, with not a hint of makeup. She looks at me and says, “You’re doing the interview? Okay then let me sit right here, where we can talk easily.” It is a giant sofa. The coffee table in front of her has one book on wine and three on architecture. Behind her, in the balcony, is a hookah. And next to her is a picture of her as a child.

It has been a relaxed day for her. She had lunch with her friends and was then going over The International Herald Tribune, which she says honestly takes her the whole day to read. The background music is always Jazz, Blues or Swing. “I can’t listen to rock. I like Miles Davis, Nina Simone, Charlie Porter—you know, the popular ones.” She has also been planning her “honeymoon” in December, a word she laughs at. “Saif and I are always on honeymoon.” This time, as always, they are going to Gstaad, a small village in southwestern Switzerland. They started going there when they started dating, five years ago, and it has been a favourite ever since. The ski resort village is home to actress Julie Andrews, Formula One’s Bernie Ecclestone, actress Jeanne Moreau and singer Johnny Hallyday. Other frequent visitors have included Roman Polanski, Prince Rainier and Grace Kelly, Michael Jackson, Prince Charles and Princess Diana and Kofi Annan. “I have never skied though, as Saif has, but this year for sure. I usually just go there and eat and party.” And even though she puts her feet up and watches sitcom after sitcom and just eats and drinks when she is on holiday, she likes planning things too. “I want to know where lunch is and then when dinner is. Plans are good.” She does not seem to mind going to a really cold place in December and just shrugs off our suggestion of maybe opting for a beach. “We go to a beach resort once a year as well, like maybe the Maldives, but Gstaad is special. It’s a fairytale land.”

Her life seems perfect. She is at the top of her career and is now married to the man of her dreams. But she seems all too practical about it. “I got married in the house I moved in five years ago, and I have always been married

in my mind. But people wanted to tag things and give it a name. Nothing has changed though. We have lived in for five years. He doesn’t tell me what to do, nor do I. He doesn’t even watch my movies. But we take out time for love. Isn’t it the most magical thing in the world? How do people say they don’t have time for love?” And even though Heroine did not do very well, she seems content with her role. “It was made for Rs 20 crore and did business of Rs 47 crore. And it got the highest opening for a heroine-oriented movie. That was my job well done.” She admits she does not read Indian newspapers that try and chronicle her every move. “Most of what you read isn’t true. Saif has told me not to react to anything at all, and never give clarifications. I have become comatose. That’s why I only read the IHT.”

It is her way of cultivating a reading habit, she says, and newspapers are her only constant companions. Unlike her husband who loves reading about history and religion, she only likes reading articles about art and travel. Give her a well-researched article about the history of France and she is hooked. “I have to travel the Amalfi coast soon. I haven’t even done much of Europe. I need to do all this. I prefer Europe to America just because of the culture and the food and just the way they live.” In India, it would be Rajasthan or Delhi. It is the cold weather and food that attract her. “Now is the best time to be there, right? Saif is shooting in Lucknow, so I may go there soon.”

She does not even read scripts and only relies on narrations by directors. “The only script I have read 20 pages of is Ek Mein Aur Ek Tu. But that kind of script doesn’t come every day.” The movie, where the lead characters do not even get together in the end, was considered different for a Bollywood movie. “I told the director, Shakun [Batra]: ‘Don’t you change the ending midway through the movie’.”

Shakun recalls Kareena as being effortless during the shoot. “Sometimes I would wonder if she was putting enough effort into the movie, because she just does everything so naturally. Even during the shoot, she would ask: ‘Haven’t you changed this line from the time you narrated it to me?’ She remembered everything. She is like Tendulkar playing a stroke. She has been doing it for so long that she just does it. Nobody can do it like her.”

Ask her if she wants to be a star or an actress, and she replies, “Both.” There is no competition and if you have the “desperate deadly combination of talent and luck, you will make it”. She likes Vidya Balan and Priyanka Chopra because they are trying to do something different, but can’t watch most Bollywood movies because they are just so bad. Do not even ask her to be on Twitter—she just can’t take on the “responsibility of so many fans”. “I don’t even tell my mother what I am doing in a day. I can’t let my fans down after taking that responsibility of informing them about my life. I admire stars who have the energy to do that. My fans will love me for my movies and will understand that I can’t do this and admire me for that.”

Film critic Rauf Ahmed feels it is a new Kareena we now see on screen, someone who is calmer and far more mature than before. “Saif has affected her in many ways. She used to be blunt about everything, but has matured now. In many ways, she is a complete actress.”

She is soon going to be busy with Prakash Jha’s next on the Anna Hazare movement (in which she plays a journalist) and a Dharma Productions massy love story with Imran Khan. She is pretty clear she wants to keep doing meaty roles, even if it is ten years from now. “I still would want to be a heroine in the movie, not a character artiste. I haven’t thought about what will happen in ten years, though. In Hollywood, there is such a thing as playing a part. But here, everyone wants to be a hero or heroine. And I am not one to make a change. I am not going to usher in any revolution.” And then she says, “Actors just want to act in successful movies. After a while, the roles become pretty irrelevant.”