For a Holiday from Men

Many Indian women nurse a desire to travel alone, without boyfriends, husbands or fathers ‘guarding’ them. But why is that so hard? 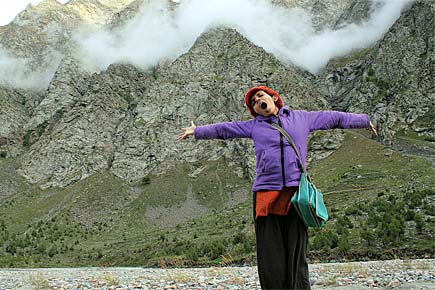 Many Indian women nurse a desire to travel alone, without boyfriends, husbands or fathers ‘guarding’ them. But why is that so hard?


Many Indian women nurse a desire to travel alone, without boyfriends, husbands or fathers ‘guarding’ them. But why is that so hard?

The average Indian man of 20 has the sexual experience and knowledge of the average European 12-year old,” writes Nick H, an online user of www.indiamike.com, an Indian travel forum. He writes the post in response to a query on appropriate clothing for female travellers in India. “So, put yourself in the position of a 12-year-old whose dreams might be dominated for weeks by having been pushed up against a real woman’s breast on a bus.”

That explains all the precautionary advice given to female tourists travelling alone in India, ranging from the bizarre to the hilarious to sometimes, downright imaginative—buy a cheap, fake diamond ring and act married to keep curious men at bay. Dye your hair from blond to black to fit in. Avoid wearing flowers in your hair, as they symbolise loose character. Women don’t enjoy the privileges of chivalry in India, so be prepared to have doors shut on your face and stand in a crowded bus while 40 men just sit and stare. Wear long-flowing skirts, as you don’t want the bottom of your pants dirtied when you squat. On the other hand, long skirts make groping easier.

Almost all travel advice given to women travelling alone in India is aimed at foreigners. “Seeing Indian women travel alone in India is quite a rarity. Most are not prepared for this,” writes 29-year-old Bhakti Nefertiti in her travelogue. It is assumed that you have either fled from your husband’s home or you are a slut, because a woman can’t be alone by choice.

Once, while passing through Ganpatiphule, a little-known beach town, Bhakti was forced to stay in a lodge as people refused to accommodate her in home-stays, usually an easily-available option for foreigners. On her last day, she found out why. “On probing with a fruit vendor, I found that a lady had once come here alone, taken up one such home-stay and killed herself in the room.”

Despite the scepticism and cultural opposition, Indian women have begun exploring the world on their own, but the phenomenon remains largely undocumented, unrecognised. In the glare of bigger travel trends and feminism debates, it remains invisible.

Twenty-six-year-old Piya Bose began travel writing and founded Girls on the Go Club, a travel company exclusively for women, after rejecting a career in law. Part of the travelling community online on www.couchsurfing.com, Piya had met some interesting people while hosting them. Inspired, she decided to quit her job and travel. She went to Tibet. “Standing in front of Mount Everest, I realised it would be a shame if life were ordinary again.”

Looking back at the experience of organising female-only trips to Ladakh, Konkan and Rajasthan, she says that the excitement among Indian women for travelling is phenomenal. “I see women around me becoming more assertive. It’s almost like they’re coming out of the closet.” They want to see the world on their own terms, and men in the form of husband, boyfriend, father, son can be restraining, she says. They want to step out of the framework constructed by family and friends. Piya finds most travel books that crowd bookshelves neutered objects, and is currently writing travel guides aimed at women.

Gender, no doubt, shapes perspectives and sensibilities. Menstruation plays an uncomfortably big role in determining a woman’s spirit of adventure. Periods are generally accompanied by stomach and back aches, water retention, bouts of low energy and certain food cravings. Not to forget a constant pre-occupation with toilets, hygiene and an unending supply of sanitary gear. In the female dictionary, ‘Sulabh Shauchalaya’ is a euphemism for a nauseating, germ-filled nightmare. It is no wonder that ‘trips to the loo’ are considered great ways of female bonding. Collective endurance brings people closer.

Travelling alone is more than just following one’s own itinerary, or the lack of it. When Simar Preet Kaur travels, it is without an itinerary, taking things as they come. “You are absolutely 100 per cent free to make your decisions, which are 100 per cent your own responsibility.”

Besides responsibilities, being alone makes one receptive to other people, new experiences, and vulnerable to epiphanies. One tends to strike up more conversations, share food with strangers, witness details that would have otherwise gone unnoticed.

Falguni Harkisandas, a yoga teacher and masseuse, believes that she learnt more in the past two years of independent travelling in America, Thailand, South India and the Himalayas than she had in 40 years. “Being a housewife and mother, I had never ventured into going all by myself anywhere. It was unexpected freedom.”

In a culture where individualism is reflected by your dressing style and unique recipe for dal, travelling alone allows one to indulge the self. You’re no longer the obsessive mother, nagging girlfriend, hard-working professional or undesirable kilos you often perceive yourself as. Bhakti Nefertiti loves the time she spends with herself on the road: “Time spent observing not just my surroundings, but my closest, sometimes deepest, often commonest of thoughts.”

Ironically, it also brings you closer to others. When you travel alone, you’re never really alone, believes Arwa Mamaji. She compares the bus rides she took between Malaga and Ronda in Spain to the one she took from Leh to Srinagar. “I got chatting on both bus rides, but the experiences were so different. In Spain, I was left with polite conversations, and in Srinagar, I left making new friends. I made friends with three Ladakhi girls who accompanied me to the toilet late at night with their torch as I was too scared to go alone. That’s why I find India more welcoming. We may not have help desks and facilities, but we have helpful people. So what if they give wrong directions sometimes?” she says with affection.

The most common problem Bhakti faces when she travels, is men. Drunk men. A bogey full of drunk men in Simar’s case, who considers the episode in a general compartment in Maharashtra the worst in all her travels. All women have to face uncomfortable stares, unwanted attention and dangerous situations at times.

Physical safety is the biggest concern of female travellers and their loved ones. Of late, 26-year-old Neha Trivedi has been consumed by the idea of backpacking in India for a few months. So her father asked her the most natural question she didn’t have a ready answer for—“Have other women done it? What was their experience?”

If Neha’s father had the opportunity to share notes with Falguni Harkisandas, a mother of an independent 22-year-old herself, many concerns would be answered. Falguni was 45 when she discovered the All Terrain Vehicle by herself, in Chiang Mai, Thailand. Even with training, the vehicle is heavy and difficult to drive. But somehow, in the company of Israeli teenagers, she managed to drive it for five hours through an undulating jungle terrain.

“It was fun. I felt I had done something courageous. Such activities are necessary to boost one’s self esteem,” she says. So she pushes her daughter Esha to do the same. Esha began travelling alone at 16. And she’s not going to give it up anytime yet. Not a chance.