The experience of airlines only the adventurous dare fly 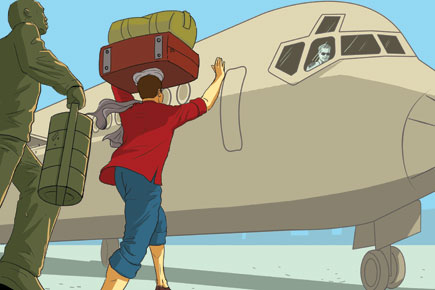 The experience of airlines only the adventurous dare fly


In the summer of 2003, I found myself trying to work an airport trolley. I was at Nepal’s Bhadrapur Airport, a sombre building with paan-stained walls and broken windows. I had decided to take a flight to Kathmandu instead of the usual overnight bus from my hometown in North Bengal. Since the bus risked running over a cliff or into an Army gunbattle with Maoists, the idea of flying from Bhadrapur, just 40 km away from the Indian border city of Siliguri, seemed to make perfect sense. The fare was just a little over Rs 3,000.

Except that I couldn’t get a single trolley to work.

That is when I felt a gentle tug on my shirt. A short man committed to complete disregard of personal hygiene introduced himself as the airport’s sole porter. Speaking between deep breaths drawn past strands of dry mucous dangling at his nostrils, he haggled over his fee a bit, and then settled on a deal to carry and load my bags onto the aircraft.

An air of stupor hung in the terminal. It had no display screens or public addressal systems for information on flight status and the like. It had no baggage screeners either; each bag had to be checked manually. With not even one aircraft on the tarmac, and our flight more than an hour late, the airport staff and passengers had begun to doze off when the porter sounded the alert. “It’s come, it’s come,” he shouted in Nepali, darting around the place. I looked out of the window, and in the sky between two mountain peaks, I saw a small white aircraft with a dash of blue on its underside. It landed safely.

As the gate to the tarmac opened, a scramble ensued. So-far-civil passengers pushed and tripped one another as they made a dash for the aircraft. We were in competition for the best possible seats, as I discovered. I started running too. It took about 10 minutes for me to reach the plane. Panting, as I turned around to see how many co-passengers I had left behind, I spotted the porter, his hands flapping and my luggage swaying in rhythm with his nostril danglers.

The aircraft was a 19-seater Beechcraft 1900D labelled ‘Buddha Air’. Some seats were torn and a few overhead cabinets would not open. But I found a good seat by a window. The airhostess, speaking under a thick veil of makeup, informed us that seatbelts had to be kept fastened throughout the journey. “And in case you want to vomit,” she said, holding up a paper bag, “use this.” To complete the demonstration, she politely proceeded to simulate the act of throwing up into a paper bag.

The hour-long journey turned out to be so turbulent that the plane’s wings seemed at constant threat of coming apart. But the view from the window was gorgeous: magnificent Himalayan peaks against an azure sky. ‘One of them must be Mount Everest,’ I thought to myself. The aircraft felt like a feather swaying left and right before its final descent. It was, under the circumstances, a peaceful landing.

Last year, I was reminded of that flight in Nairobi while boarding a small plane for a short hop on a domestic airline. Wilson Airport is a small airport—you’re out on the tarmac almost as soon as you enter the terminal. But it is also one of Kenya’s busiest, serving mostly 12-seater Cessna aircraft that are used to ferry tourists around its hotspots. Their pilots do not just fly the planes, they also perform the safety drill before takeoff and serve cabin refreshments once airborne.

The pilot of my Safarilink Aviation flight, which hopped from one airstrip to another dropping off passengers, had to rise from his seat on one occasion to peer through the windscreen for a couple of nearby aircraft that his radar could not pick up. Otherwise, I reached my destination, Chaffa, an unpaved airstrip in Shaba National Park, without any cause for alarm. It was a clear day, thankfully. It had rained the day before and a plane that overshot this airstrip had to be towed out of the muck by a jeep.

Elena Koulious, A 25-year-old Greek citizen who works as a cabin crew member of a Middle Eastern airline, is full of scrappy aviation stories of her short stint with a Greek carrier called Astra Airlines, which began operations in 2008. Astra owned two British Aerospace 146 planes (a model whose production ceased in 2002) that flew to Russia and other parts of Europe. One of these had a crack in the cockpit window, and the crew would often complain of headaches caused by it.

The airline also had a 22-year-old Airbus A320 on rent whose seats and trays would regularly break, toilet flushes would frequently fail and engine would sometimes go dead just before takeoff. “I was mostly operating in the Airbus,” says Koulious of the job she quit two years ago, “On one occasion, the plane could not take off because the computer system went down. On another, when the aircraft reached Paris, airport authorities conducted a surprise check on it and found that there weren’t enough lifevests and its emergency lights were not working. The aircraft was grounded for three days.” Another peril Astra’s passengers and Koulious had to brave was the food served. It was usually stale. “I was worried I would either die in a crash or of bad food,” she says, “The salami they once served was green. A cucumber salad once had moss on it.”

Sometimes, however, it is not the service that rattles you, but the company of your fellow passengers. While our former colleague at Open Shubhangi Swarup once caught a good nap on a Mumbai-to-London flight via Cairo on Egypt Air (she was on antibiotics), her husband Nikhil Hemrajani had no such luck. “There was all this constant noise and chatter,” he says, “Passengers weren’t even listening to the cabin crew’s pleas to stay quiet.” One of the louder passengers got up to visit the restroom while the seatbelt sign was on. “As he got up, I heard this scream,” recalls Hemrajani, “It was an air-hostess shouting at him to sit down.” The passenger did as told, but the hush that descended did not last long.

Flying cheap can leave you with other quaint memories as well. Sagar Rao, an advertising assistant director, got what he terms “a steal” last December. He, along with a friend, found a Mumbai-to-New York return flight during the holiday season for just Rs 26,000 a seat. It was Saudi Airlines. The only catch was an 18-hour-long halt in Jeddah. So he got a transit visa for Saudi Arabia and spent the layover time roaming the city. Most of Rao’s co-passengers were migrant workers from India, and he befriended a few of them. One of them, from Andhra Pradesh, told him how he was promised a plumber’s job but got one as a shepherd. Rao also witnessed a loud confrontation on the return flight—a passenger wanted to sit with his wife, but the couple had been seated apart; he insisted they be re-united before takeoff. “To me, all this was just awesome,” says Rao. “Whoever the passengers or whatever the service, give me a Rs 26,000 ticket to New York and back, and I’ll take it any day.”

Two years ago, my mother and sister took Buddha Air to Kathmandu.

Since my sister had taken the flight on earlier occasions too, I asked her if anything had changed. The airline staff, she told me, now did the job of loading the aircraft with baggage. I wonder what happened of that enthusiastic porter with the rhythmic nostril danglers.