The spa treatment costs are small change if you won’t blink at paying Rs 1,25,000/night for the Presidential Suite here 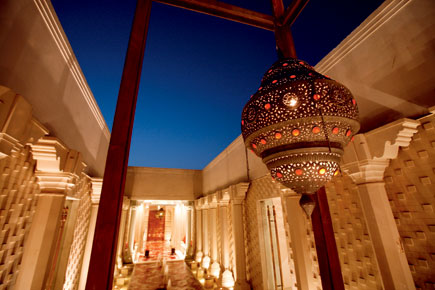 The spa treatment costs are small change if you won’t blink at paying Rs 1,25,000/night for the Presidential Suite here


In June this summer, when the heat in Delhi was at its height, the city as usual had emptied out. The few left behind in the unforgiving city forced a brave smile onto their AC-swept faces as they declared what an absolute pleasure it was to drive down Delhi’s wide avenues during these days, no traffic to mar their experience.

So, this summer, along with everyone else, my family too packed our bags, ready to drive out of the city. Except: we were headed to Gwalior. A mad friend had decided to break all conventions by plotting a marriage a) in the summer b) in a city where the slightest breeze could possibly scorch your skin c) and, as we were to discover, without the benefits of air-conditioning to prevent his guests, who were of course not to be denied the opportunity of showing up in their silk finery, from sinking—or slinking away—during the open-air ceremonies.

As it happened, it turned out to be a grand idea. We—the marriage party—spent two days cocooned inside a stunning heritage palace hotel in Gwalior, where we, and a couple of equally lunatic foreign tourists, were the only guests. The most important piece of clothing in our luggage was the swimsuit. As long as the sun was up, we made sure we stayed in the pool.

Over the past six months, my three-year-old daughter has been constantly asking, begging, coaxing, nagging us to take her back to Gwalior. Asked what she liked most about the place, she said, “The AC.” She would be shocked if we actually did show her Gwalior.

Just as she lovingly remembers her Little Gwalior, I too found my Little Agra last week. Now, Agra is a place I’d visited with my parents a very long time ago, and I do not have very fond memories of it. Dusty, crowded, dirty, hot, noisy and crowded—and then, the Taj Mahal left me stone cold. The city with supposedly the ‘most romantic monument’ in the world is one hell (pun most certainly intended) of a place for romance.

As I made the three-hour drive from Delhi early one morning last week, my hopes of finding a better city than the one I had been introduced to earlier were quickly dashed. The road is smooth and relatively free of traffic at that hour, but the surrounding mustard fields are fast being swallowed up by tech and business management schools. As we stopped to show car papers at the border between Haryana and Uttar Pradesh, our car was quickly surrounded by vendors of trinkets, and men who controlled their performing monkeys with leashes and lathis. There was enterprise among the ‘monkey men’ too. A few clever ones, knowing tourists on the lookout for ‘exotic India’ photo-ops would need a slight push to favour their particular monkeys over the others, had obviously had some fun with paint. There was a redhead who glowed, but the clear winner was a ferocious looker with black and brown stripes.

So it was that a couple of hours later, after several firm refusals at the city centre to persistent queries like “you want hotel”, “guide, madam, only Rs 500”, “you want to see Meena Bazaar, only Rs 100 with the Taj Mahal”, when I entered the ITC Mughal Agra for two days of luxurious spa treatments, I didn’t really need any convincing that I didn’t have to step out of the hotel premises at all to have all the fun that I wanted to. The decision was sealed when I wandered onto the rooftop jharoka, which had such a splendid view of the Taj Mahal that it must have persuaded many against an unnecessary trek to the monument itself.

To my genuine pleasure, I figured that the hotel is made exactly for people of my disposition (those who don’t really care to visit Agra), but with greater means. It aims to entrap visitors within its 35 acres of opulent spa space, Kaya Kalp: The Royal Spa.

The ITC Mughal must have long realised that it was working against many odds to keep the hotel in business. Beyond its few monuments, the city itself cannot keep visitors from escaping to quieter, more picturesque locales for very long. And hoteliers have obviously been long moaning the surprising efficiency of the Indian Railways in dropping tourists off the Shatabdi early in the morning, with the definite promise to pick them up that very evening.

The Kaya Kalp, created exclusively for the use of hotel guests, is not just a place you go to for a massage or scrub. It’s a destination in itself, designed to make you forget the chaos outside. A sense of grandeur envelops this space, recreating the Mughal concept of ‘paradise’: from its lap pool to its lavish gardens, running water channels, pomegranate orchards, fountains, and the singular attention that is lavished on you at all times. I was one of the hotel’s humbler guests: a double room at my command, and my indulgences over the course of two days wouldn’t cost me more than Rs 50,000. But for a true getaway within this getaway, one needs to just enter the Khwab Mahal Presidential Suite, which with its tariff of Rs 1,25,000 a night, offers its own spa room, courtyard and plunge pool.

A massive gym surrounded by glass windows looking out onto a pond is the first sight to greet you at Kaya Kalp. If the bulk of exercise machines is an indicator of how much weight they could help you lose, the ones that fill up the floor space here could get you to size zero in no time. Nonetheless, I felt only pity for the lone rotund guy working up a sweat on a treadmill, feeling obliged to exercise on his holiday.

I was on my way to sweat it out in the Turkish hamam.

This private steam room is the perfect place for a bashful spa debutante (though I am nothing of the sort, I have since my return to Delhi been called “conservative” for specifying that I was “uncomfortable” with any gender other than a female attending to me). I was greeted at the door by a lady in, strangely enough, a red swimsuit and a shower cap covering her head. Why this unusual costume I was soon to find out.

Entering the sauna room, I confidently flung my robe off and settled comfortably on a marble seat in a corner to allow my eyes to adjust to the dim light filtering through the fog. What I vaguely saw was a large marble platform in the centre of the room, towels spread over it for my treatment. I clambered on.

Little did I realise then that I was, literally, to be given a bath. The therapist began with the “traditional, natural, deep cleansing” tamarind and sugar scrub. Ouch. There was nothing gentle about sugar. The old dead skin was literally being scrubbed off. Raw as hell, I was then given a—thankfully gentler this time—soapy ‘kese’ scrub, before being washed down with water. My skin tingled with newness as I exited the indoor spa that evening—only to get lost in its vast garden.

That night, the little sniffles I’d entered Agra with transformed into a full-blown cold. The next morning, muscles aching, I once again passed down the corridor that threw fine mist over you as you headed to the spa. The menu for the morning: a 90-minute special Kaya Kalp massage.

I waited impatiently as my Thai therapist for the day pounded my feet with a hammer—a Kaya Kalp innovation, which despite my hurry to get the massage going, I am now determined to replicate at home—and led me through a few deep breathing exercises. All I can say is I was sorry when the 90 minutes were up. But evidently, my time at the spa wasn’t. I was led to the warmth of the steam room, followed by a dip in the jacuzzi.

I returned to Delhi that evening, scrubbed, pounded, squeezed, exfoliated, smoothened and softened. And I smelled wonderful. But here’s the misery. My nose remained blocked, and after much resistance, I finally went to bed smelling of Vicks Vaporub, spread as it was over that wonderful, beautiful new skin of mine.