Even Heaven Has Its Flaws

McLeodganj/Dharamshala has all the signs of a tired tourist haunt: ugly neon signs, ungainly buildings and stories of drugs and whores. But the air is still crisp, the mountains majestic and the cake memorable 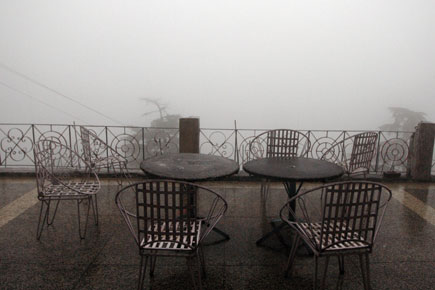 Dharamshala has all the signs of a tired tourist haunt, but the air is still crisp, the mountains majestic and the cake memorable


Khoob jamega rang, jab mil baithenge aap, main aur carrot banana cake. This thought occurs to you one evening, as you sit at the Chocolate Log Café in McLeodganj.

Orange-coloured specks of carrot dot the pale yellow pound cake. At the bottom is a layer of diced banana. It has turned slightly purple, but not in a bad way. The bonus is that the pound cake tastes like mawa cake.

All in all, a fine specimen of cake.

You say this to Cheryl Kumar-Templeton, who owns this eatery located at the quieter end of Jogibara Road. She is a middle-aged woman, covered in a red sweater. Her hair, cut short, is black. Kumar-Templeton was a high school teacher from Bangalore. Her husband, from Pune, was a pilot in the Indian Air Force. In 1974, they fell in love with McLeodganj. Kumar-Templeton calls it her “karmic mountain”. They gave up their original careers and moved in.

As you sink a fork into the cake, Kumar-Templeton reveals herself to be feisty and expressive. Her tone betrays anger at the fall of McLeodganj from pristine haven to a morally compromised tourist haunt. “It is as corrupt as Delhi,” she says. “There is prostitution, paedophilia, drugs. It is so easy to get drugs.”

When talking about “my cakes”, though, she melts. “I want them to reach the hearts of people.”

Magical and challenging in equal measure, McLeodganj is a hilltop settlement that overlooks Dharamshala in Himachal Pradesh. It is located in the Dhauladhar mountains, some of which are covered in pine and deodar trees, others in snow. Getting to Dharamshala has gotten easier now that there are daily flights operated by regular airlines. From the airport, McLeodganj is a short uphill taxi ride away.

Despite blemishes, ‘McLo’ is one of India’s top tourist destinations. Many go there for the famous Vipassana course, which requires you to meditate without speaking a word for 10 days. Many go there to get a feel of the Himalayas through the Dhauladhar Range. It boasts of some impressive peaks. The tallest is Hanuman Ka Tibba, which stands at 5,639 m above sea level. It is visible from Triund, a four-hour trek from McLeodganj. McLeodganj itself offers several vantage points from where to gaze in awe at the grand mountains. Towering above clouds in the great beyond, they look like a promised land, magnificent and unearthly.

Back at the Chocolate Log, Kumar-Templeton says, “Why did I start this [the café]? I will ask the question and answer it myself. At that time [1989], Indian tourists had not discovered Dharamshala. The people who came here were mostly Westerners. In terms of eating, there were only thukpa-momo or chai-samosa stalls.”

Was she fond of cooking?

“Not at all,” she says. “I also took time to get it right. The first pizza I made, an Italian man returned it, saying, ‘Madame, this is not pizza. It is breeck.” She laughs at the memory.

A bit romantically, she adds, “In the past, people came here for the right reasons. They came to teach, learn or meditate. Now it is just a hee-haa place. It has lost the essence of the Himalayas and the Dalai Lama.”

It is true that there are some unpleasant elements in these once-untainted hills. Walk up to the busy end of Jogibara Road to the Main Square, past the numerous stalls selling Dalai Lama and Buddhist mementos, scarves and momos, and you will find yourself surrounded by noise, aggressive vagabonds and new buildings that are plain eyesores. There are ridiculous neon signs. Cars honk in decidedly un-Buddhist fashion, bullying their way through streets barely wider than Tendulkar’s bat.

What annoys Indian tourists is a sense that they are not welcome. For example, the boys at Oogo’s Italian restaurant were almost always surly. And one morning, when a large group of small-town Indians walked in for breakfast, they were told to leave on some feeble pretext.

The several money bureaus along Jogibara Road and the parallel Temple Road are worse offenders. Automated Teller Machines (ATMs) around here are few and frequently shut. But these money bureaus can provide cash against credit cards, so long as they are issued overseas. One place agrees to give me money, but at a commission of 10 per cent, as against 3 per cent for foreigners. The lesson for prospective Indian travellers is obvious. Carry enough cash. Don’t give these fraudsters business.

But that is not the point of Himachal Pradesh, as many admirers of the region say. The point is the nature. The point is the unique dual identity of the state, where Indians as well as Tibetan people live in relative peace. Indeed, the scale and silent power of the mountains and beauty of the natural surroundings leave a profound impact. It inspires you to revisit the Himalayan adventures you might have read about. I mentally recount Into Thin Air, John Krakauer’s superb book on the tragic Everest expedition of 1996.

Quaint Tibetan traditions add to the mystique. Occasionally, sitting in the balcony of my room at the enchanting old Pema Thang guesthouse, I can hear the hum and echo of Buddhist prayers. In front of me is an uninterrupted view of the Kangra Valley. Several strings of multi-coloured Tibetan prayer flags, some of them faded, extend from the guesthouse to the tall pine trees a few metres away.

One morning, I follow a mountain trail from the Tsuklakhang temple (which also houses the Dalai Lama’s residence) to the Nenchung Monastery. Local Tibetan villagers with scraggy faces pass by, breathing hard and muttering prayers, the fingers of one hand counting holy beads. Monks in burgundy robes sit in prayer on large stones. Some head to a café, where they are as likely to flip open their laptops and sip a cappuccino as any contemporary traveller.

The tall, multi-limbed pine trees are nature’s amplifiers. Almost each hides a bird, or more. This results in a wide range of bird song. In the crisp mountain air, it rings loud and clear. Somewhere, a burly Russian man makes pencil sketches of the landscape. He says he can’t speak English. The smoke on his breath smells sweet. Down below, there is lower Dharamshala. One can spot the Himachal Pradesh Cricket Association Stadium, thanks to the red roof of its clubhouse.

A few other things also redeem the experience. Almost all the cafés are excellent. I’m particularly impressed by the fare and service at Café Budan, Peace Café and Mandala Wi-Fi Coffee House. The abundance of top quality baked treats seems to have even sweetened the tooth of the idols of Buddha and other deities in the Tsuklakhang temple. At their lap you see piles of biscuits and chocolate bars, offered to them by devotees.

The streetside momos are too bready, but the thukpas and thenthuks, noodles in broth, are perfect for the nippy weather—warm and comforting. The only problem, and it is a coincidence as well, is that you can’t say ‘thukpa’ or ‘thenthuk’ without spraying the waiter with some saliva. The weather is another plus if you are coming from the hot plains of India. Even though it is summer in Himachal, I have to wear a jacket and scarf in the evenings.

One night, after some monotony has set in and I shave standing on one leg just to beat boredom, we go to a pub called Black Magic for a drink. At the entrance, Suraj Tikku, ‘admin’, as his card says, grudgingly allows stag entries. To one group, the admin nervously asks, “You are from good families?” Inside, not for the first time in McLeodganj, you are greeted by an image of the Rock Star of Benevolence, the Dalai Lama.

The music is mostly techno at the start. By the kind of dance this genre inspires, you wonder if people are getting paralytic attacks on the floor. What’s with those fingers—some splayed, some hooked? Need something? Finally, about an hour later, and once a nice beer buzz has set in my head, the DJ spins out hits from my time: Michael Jackson, Pink Floyd and Bill Medley and Jennifer Warnes. I leave, sated.