Drinkers of the Body’s Tonic 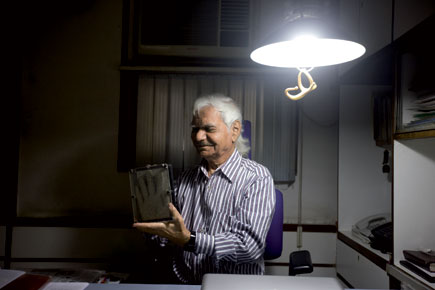 Sudarshan Dheer, A 77-year-old south Mumbai resident with a white bush moustache and ponytail, takes out a small bottle with a dropper and says, “I don’t know how old this is.” The bottle contains urine and Dheer has an interesting anecdote of it. About 20 years ago, he was watching television at home lying on the carpet. He dozed off and when he woke up in the morning, one of his ears had lost both hearing and sensation. He went to a doctor who referred him to a specialist who asked him to perform a number of tests and at the end of it told him, “My friend, this ear is gone.” He said Dheer should be taking care of the other ear now and prescribed a medicine for it. Back home, when Dheer took it, he felt nauseous. He didn’t want to take any more. His wife reminded him that he had some old urine stored away. “Why don’t you try that?” she asked. The next morning, Dheer boiled some water and put the bottle of urine in it to warm it up. He then put a few drops in his ear and soaked up the excess with a tissue. “I did it for two or three days and the sensation came back in my ear,” he says.

Dheer’s daily routine begins by waking up at 4.30 am and drinking a glass of his own urine. When he is afflicted by an infection or any other ailment, he increases the usage to three times a day—a glass an hour after lunch and dinner too. And while all this might sound unpalatable to many, Dheer is part of large community of people who believe that the consumption of one’s own urine gives a huge boost to immunity.

He heard about auto urine therapy (AUT), as it is called, nearly four decades ago when he had a painful viral infection that rendered his right hand almost immobile. “I couldn’t even sign a cheque,” he says. Somebody told him to read a book called Water of Life, the bible of urine drinkers written by John Armstrong. As the book advised, Dheer began to drink urine and his ailment came under control. Over the decades since, his faith in it has only increased. Dheer is the founder of the Water of Life Foundation in India.

Morarji Desai, the late Prime Minister of India, was a urine drinker who felt no coyness in talking about it. He was from Gujarat and this is a practice most popular among Gujaratis. There is even a monthly magazine called Shivambu, published from Vadodara, that is aimed entirely at urine consumers.

Dinesh Doshi, who is 80 years old, was introduced to urine drinking 27 years ago by a book written by another Gujarati, Raojibhai Patel. Doshi didn’t have any ailment but got interested enough to try it out. “I thought this is a free thing and if it is so good for health, why not try it?” he says. In the beginning, he felt a heaviness after drinking it, but he didn’t let that dissuade him. He continued and soon began to feel good. He also started reading up more on it, subscribing to Shivambu too. He says he felt a great increase in his immunity. “I was staying at Lokhandwala Complex in Andheri. The drinking water and sewage pipeline got mixed up. In every flat, one or two or three people were suffering [health] problems. My family has six members, two persons in each generation. Being the eldest, I should have been the first victim. But I was not. My immunity was much better than other members of my family.” Doshi drinks a glass in the morning and sometimes at night. “If I have any problem, then I may increase my urine intake,” he says.

To those who drink it, urine is not a waste product. According to them, the body produces useful chemicals like hormones, steroids and enzymes to keep itself healthy and do its repair work. But it does not need all of it all the time and the surplus is shed in the urine. When you drink it, you are thus merely reimbibing all those useful chemicals that have already been processed by the body and are in their most absorbable form.

While drinkers often cite research to justify their practice, when it comes to peer-reviewed studies published in credible scientific journals, there is little support for these claims. Like all alternative medicine, urine therapy too relies on faith, anecdotal examples and one’s own experience. It has had takers among curious categories of people. For example, prisoners tortured by policemen are known to drink their own urine to heal themselves.

Dheer takes it to a spiritual level. He says that the quality of urine is determined by one’s state of mind at the time it is processed. The best is produced in one’s sleep at night when there is no stress. “Whatever our condition of mind during sleep, is it possible to create the same condition when you are awake?” he asks. Yes, he answers himself, it is possible to do that through spiritual practice. And the better your state of mind becomes, so also the quality of urine, consuming which leads to better health.

“Unless you handle your mind, your urine will be polluted. If you keep on drinking water from a dirty pond, what will happen? First we have to clean our mind,” he says. “Once you understand that, then you realise the need to take care of your mind, thoughts, inner self… so that it reflects in the urine. You will discover then a path to yourself. Then you are a free person.”

Dheer eats simple vegetarian food, meditates and does pranayam for two hours daily. He does not have red chillies, pickles and deep-fried food. “More the masaala you put, the more the taste of urine will be bad,” he says.

Gujarat might have most of India’s auto urine therapy practitioners, but there are many others throughout the country. In Kerala, it was recently the subject of discussion on a popular talk show on Surya TV. According to RM.R Rajasekaran, managing director of a textile firm, RMR Silks Pvt Ltd in Karaikudi town of Tamil Nadu’s Sivagangai district, many people practise auto urine therapy in the region. ‘So also in Namakkal, Arakkonam, Vellore District,’ he says, in an email interview.

Rajasekaran is 63 years old ,and has been a urine drinker since he was 39. His introduction to it was a Tamil book, Sarva Roga Nivarani, by Swami Bhumananda. He was severely diabetic and looking to bring it under control. The book featured letters by people who had benefited from the therapy, with their addresses and phone numbers. Rajasekaran contacted many of them. ‘Some of them were big people like judges, owners of reputed business houses etcetera,’ he says. Initially, for a few days, he used urine for external application. Then he started drinking it. His diabetes symptoms went away, and intriguingly, in his case, he says, ‘So also [my] fear of death, which was a constant companion for several years.’ He kept drinking urine from then on, but in between for three years, he did not do it regularly. He had started non-vegetarian food, alcohol and cigarettes; on days that he partook of any of these, he wouldn’t drink urine. But now, after giving up those vices, he drinks his first urine every morning.

In January 1997, Rajasekaran had a heart attack and believes that his urine habit was what helped him fend it off. He even climbed a flight of stairs to inform his doctor, who refused to believe it. ‘He was laughing and said that in which case I would not have been able to climb the stairs. On my insistence, an ECG was taken, which confirmed the heart attack,’ he says. On seeing how beneficial it was for him, his family members also started drinking it. Usually, he says, people don’t accept it easily: ‘A lot of counselling is required. I have been able to convince many suffering people and convert them to AUT.’

Millie Mitra, A 50-year-old Bangalore resident, got interested in urine therapy after she became a mother in 1992. It was part of a larger quest to bring up her children as naturally as possible. She breastfed them for three or four years, did not vaccinate them and put her trust in homeopathy over allopathy. But because this was going against conventional wisdom, she also had to deal with her own fears of whether she was doing the right thing. She was, therefore, reading a lot on natural hygiene.

In 1994, she was teaching at a school in south Mumbai. One day, browsing through a second-hand book shop, she came across a small book on urine therapy. Intrigued, she went through more books on the subject. “I was fascinated that you can heal yourself with your own medicine and don’t have to depend on any external factor for healing,” she says. “It didn’t take me very long to take that first step. It wasn’t repulsive. I put it into my mouth for a couple of minutes and then [spat] it out. I did that for two days and by the third day, I was drinking it. The changes I noticed weren’t anything dramatic. I definitely felt that there was a kind of physical cleansing. I felt a lot more energy.”

Mitra taught her elder daughter to consume urine and says she could notice the benefits. “She had none of the things that babies have—no colic, no ear pain, rarely even a fever. Whenever these things happened, I would resort to urine,” she says. When the child had an allergic cough that would come up at night, she learnt to “go to the bathroom, collect her urine and drink it”; “It would subside within 10 minutes or so.” Mitra didn’t try to hide any of this because she felt there was nothing to be ashamed of. In fact, she also went about suggesting it to other parents.

Two or three years ago, Mitra was diagnosed with a thyroid problem and forced to take allopathic medicines. She therefore stopped drinking urine. The medicines have now been minimised and in a few months she expects to stop them altogether. She is then going to restart urine consumption. She however did notice something unusual when she stopped it. “As long as I had been having urine, my hair remained jet black. In the last two years, because I have stopped, I can see a lot of grey coming up,” she says. Urine, she believes, works like a vaccine. “The body has already created something that, when you put it back, stimulates your immunity,” she says.

Her daughter stopped once she grew up and became conscious of what she was doing. Yet, Mitra persists in telling her children to drink it. Her elder daughter, who is 21 years old now and studying abroad, recently called her to say that she had a bad throat. Mitra told her to gargle with urine. “She said, ‘Ma, can’t you stop it now,’” says Mitra. “But I am certain she’d get instant relief if she tried it.”