The romance of romance in Istanbul 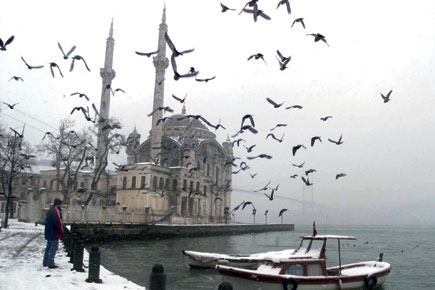 The romance of romance in Istanbul


Three years ago, I decided to propose to my then boyfriend. In hindsight, the desire had very little to do with marriage. It was more about Istanbul. So what if the timing was not right and marriage a debatable hypothesis, we were in the most beautiful city in the world in winter, a season designed to bring people closer. Only someone logical could have resisted that seduction.

For proposers, Istanbul can spoil you rotten with options. It has the whole spectrum, ranging from historic monuments, glamorous night cruises on the Bosphorus to panoramic rooftop restaurants and quaint neighbouring islands. One can throw in a bellydancer, whirling dervish or musician for effect. It is unfortunate that a proposal demands drama, for the most ordinary part of Istanbul is also the most romantic, the cobblestone streets linking Ottoman architecture to Mango and Zara stores. Streets suffused with aromas escaping Turkish coffee, doner kebab stands, fresh juice and roasted chestnuts carts, the sight of fluffy cats bordering obesity, all this in the proximity of strangers eager to seduce or dupe.

What aroused my desire, though, was the specific taste of a semolina pudding with fresh raspberry sauce, consumed one night at a rooftop restaurant in hip Beyoglu, overlooking the nightscape of Istanbul. The allure of the city had shrunk into a dessert in my plate, mildly sweet, mildly fragrant, mildly tangy, mildly spiced. Like all worthy things, it came with a bitter taste—Turkish coffee. It filled me with longing, not to speak of caffeine and sugar induced hallucinations.

It had snowed the night before he arrived. He loved snow as much as I hated the cold, and I was happy for his sake. Winter would give us an appetite for the heavy-duty Turkish dessert kunefe, a deep fried cheese served with fresh cream. It would afford us the luxury of sipping endless cups of warm sahlep.

Instead of a guidebook, I handed him a copy of Museum of Innocence, a novel by Orhan Pamuk. At the heart of it lies a twin obsession with Istanbul and a hot woman, and nostalgia for times past. Reading it there transformed our experience. We explored the streets and localities that the characters frequented, like Yesilçam Street (the hub of Turkish cinema) and Nisantasi, a neighbourhood of the rich. The book came alive.

Curiosity led us to plebeian eating joints where one had to point and order, to the original Kurukahveci Mehmet Efendi in Spice Bazaar, home to fresh ground Turkish coffee since 1871 and fresh seafood sold under Galata Bridge. While I enjoyed the café experience, sipping on Turkish coffee and tea on rugs, with pastries or lokums on the side, I was besotted by the instant hazelnut coffee (four sachets to a lira) that he offered me in bed each morning.

In Turkish, the Hagia Sophia is known as the ‘Ayasofia’, and that is how we learnt to say it when lost. It was first built as a church when the city was called Constantinople, captured, partly taken apart and restructured—with a dome and minarets—as a mosque by the Ottomans in a city renamed Istanbul, and later declared a museum by the Republic of Turkey. Its faded pink dome, housing partial mosaics of Christ and Mary and gigantic orbs of Arabic calligraphy, stood out among the city’s monuments.

The Ayasofia was neither ornate nor complete, but had gazed at a confluence and conflict between two continents and cultures for more than 1,600 years. If it did not match your idea of beauty at first sight, it would shape your conception of it thereafter.

We sat on a park bench in front of the Ayasofia to watch the sun set. We had forgone visits to Topkapi Palace and traditional hamams for the sake of ordinary pleasures like this. It was then that he told me he had seen his Ayasofia long ago.

I saw the moment arrive and pass, the one of proposing. We had strolled from the bustling Taksim square to Galata tower, venturing into shops that caught our fancy, picking up a tarbuka (Turkish djembe), sharing a glass of fruit juice, thick with orange rind and pomegranate seeds. It looked like Rapunzel’s tower, complete with high windows and a circular balcony for her to let her hair down. It towered so high because it was on a hilltop, offering a 360º view of a winter night in Istanbul. The ill-shaped patch of darkness was the Bosphorous, with brightly lit ferries skitting around it like fish. To me, every bridge in Istanbul connected Asia to Europe, and there they all were. Ahead of us sat the Blue Mosque and Ayasofia, illuminated. Dwarf apartment blocks surrounded us from all sides, open windows offering glimpses into unknown lives.

I have a photograph of his taken that night. Though it is out-of-focus, a quizzical look on his face is evident. “What happened?” he asked as we stood there. “Nothing,” I had replied. He knew something was playing on my mind, something I refused to share, till he got distracted by the view and moved on. I trailed him, too cold to walk alone.

We stood there, battling the Anatolian winter with body warmth. Istanbul rolled out from our feet, hemmed in by a river, the seas and two continents. And I realised how naive I was. Asking him for greater happiness or permanence of the moment felt unjust. It felt impossible.