Christ on the cross… maybe not

A Swedish pastor’s PhD dissertation has created quite a stir around the world by questioning an accepted ‘fact’ of Christianity. 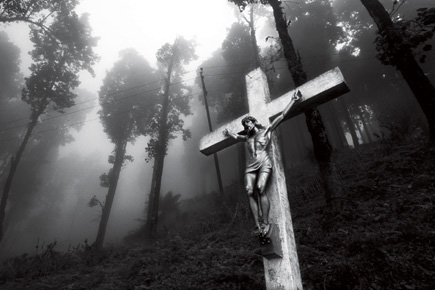 A Swedish pastor’s PhD dissertation has created quite a stir around the world by questioning an accepted ‘fact’ of Christianity.


A Swedish pastor’s PhD dissertation has created quite a stir around the world by questioning an accepted ‘fact’ of Christianity.

Crucifixion in Antiquity: an Inquiry into the Background of the New Testament Terminology of Crucifixion is a mouthful, but not when it comes to titles of PhD dissertations. In Gunnar Samuelsson’s case, this is a dissertation which instantly catapulted him to world fame once he put it out in public recently. From CNN to New Kerala to Berliner Zeitung, it became widely publicised and often misreported. He was astonished at the scale of interest in it. Essentially, for nine long years, Samuelsson sifted through ancient historical and religious texts to make the case that there is absolutely no reason to believe Jesus Christ died on a cross. The irony is that the man who was calling into question such a fundamental tenet of Christianity is a Swedish pastor and theologian firmly rooted in the faith. Excerpts from an email interview:

Q. Your dissertation makes the case that Jesus Christ was indeed executed in some suspended fashion but there is nothing to say it was on a cross. On what basis do you establish this?

A. The reason is the vague terminology. The whole Passion narrative [parts of the Gospel dealing with Jesus’ trial and death] rests upon a noun and a verb as far as the knowledge of the execution form is concerned. Take these examples from the Gospel of Mark with words indicating the punishment form in bold:

Mark 15.12 Pilate spoke to them again, “Then what do you wish me to do with the man you call the King of the Jews?” 13 They shouted back, “Crucify him!”… 15 So Pilate, wishing to satisfy the crowd, released Barabbas for them; and after flogging Jesus, he handed him over to be crucified.

Mark 15.25 It was nine o’clock in the morning when they crucified him….32 Let the Messiah, the King of Israel, come down from the cross now, so that we may see and believe.” Those who were crucified with him also taunted him.

Q. Is there any doubt that Jesus Christ existed? What is the evidence in contemporary literature of the time of his existence?

A. There is no doubt that Jesus existed. In comparison to other ancient individuals, he is well represented by ancient sources. New Testament texts are naturally the primary sources. We have thousands of ancient fragments where the oldest preserved are written some 30 years after the Gospel (John) was composed. Compare this to Homer and Herodotus, where the few preserved manuscripts were written about 1,000 years after being originally composed. The preserved sources for Caesars’ Gallic Wars are nine or ten and the oldest were written 900 years after its original composition. The number of texts and the nearness between preserved New Testament texts and the time when they were written is without parallel in ancient literature.

When it comes to extra-Biblical sources, the depiction of Jesus changes from positive to negative. There is one exception, and that is the Jewish historian Josephus.

Now, there was about this time Jesus, a wise man, if it be lawful to call him a man, for he was a doer of wonderful works—a teacher of such men as receive the truth with pleasure. (Joseph. Ant. 18.63f)

Parts of the text are disputed as genuine, but not the ones that attest the existence of a special man named Jesus who had followers. Another Jewish source is the Talmud that mentions Jesus, but in a negative sense:

On the eve of the Passover Yeshu was hanged…‘Ulla retorted: Do you suppose that he was one for whom a defence could be made? Was he not a Mesith [enticer], concerning whom Scripture says, Neither shalt thou spare, neither shalt thou conceal him? With Yeshu however it was different, for he was connected with the government [or royalty, i.e., influential]. (The Talmud, bSanh, 43a)

So Jewish sources attest Jesus’ existence. There are also some Roman texts that need to be taken into consideration. Pliny the Younger sent a letter to the Roman king Trajan and offers a description of the ‘Christian cult’. Thus, that there existed a man called Jesus/Christ in Palestine during the early first century who made bold statements about himself and was executed, and that he had followers called Christians, ought to be deemed as certain. The question who he was is although chiefly left unanswered by the extra-Biblical texts.

Q. What was it that made you choose this particular subject to research? How long did it take?

A. Being a parish minister, the phone rang one day and I got an opportunity to spend some years on doctoral studies at what was then the Department of Religious Studies at the University of Gothenburg. During the preceding talks with my presumptive supervisor, we soon ended up with the topic of crucifixion—with special attention to how Paul uses it as a rhetorical device in his letters. The first study I got in my hands was [German historian] Martin Hengel’s epoch-making book Crucifixion. With fascination I was led by Hengel to some crucifixion accounts in Herodotus’ History [written by the Greek historian in the 5th century BC], in which Herodotus used the familiar verb [greek characters that don’t render in this script; see page 40 of eMag https://openthemagazine.com/emag/2010-11-20]. Herodotus’ accounts of suspensions of corpses and body parts were all labelled ‘crucifixions’ by Hengel. This mystery about the meaning of and its counterparts made me curious and sparked an investigation on the philological aspects related to crucifixion in the Greco-Roman and Biblical texts. I spent nine years on the research presented in my doctoral thesis.

Q. Is there a more likely manner in which Jesus Christ died?

A. The more likely manner is still the way that it is traditionally depicted in church art—executed on some kind of a cross. The texts do not contradict such an understanding, but my point is that neither do they support it. The traditional understanding—which might be correct—is thus based on the traditions of the Church, and not on the texts as most people think.

Q. What is the explanation for the cross and crucifixion becoming such a powerful image of Christianity?

A. I have no direct answer to that question. There is indeed a discrepancy between the vague picture of the texts and the detailed and colourful depiction of the Church. It is possible that the memory of how the execution device looked like affected how the Church later depicted the device. The problem is however why this memory did not find its way into texts of the New Testament.

Q. The popular image of Christ is as a bearded gaunt man on the cross. If the cross itself is in question, then is it possible that Christ could not have looked the way in which he is portrayed?

A. The textual sources offer no information at all about his facial appearance.

Q. In the publicity surrounding your dissertation, are there wrong inferences being attributed to you?

A. The most common misunderstanding is that I have questioned the historicity of the death of Jesus. I do not deal with history, I deal with texts. Let me show what I mean with word-play: Journalists suppose that I say “Jesus did not die on a cross,” while I, at the most, am saying “Jesus maybe did not die on a cross,” and that is a big difference.

Q. Why do you think there has been such a huge worldwide interest in your dissertation? Is it an indication that religion continues to be an overwhelming reality of man?

Q. Does finding such an elemental doubt in one’s religious experience lead you to question other certainties? Does it test your faith?

A. Our faith needs to be tested regularly; otherwise it would not be a faith. I have always questioned my beliefs, both
my religious and my scientific. If the means by which God brought reconciliation to the world looked different compared to the one my traditions have taught me, so be it.