Before you can say Harley-Davidson 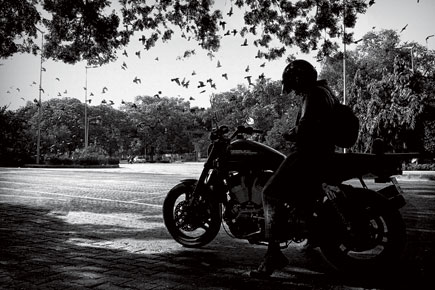 
I want a boutique midlife crisis. I want a rich, comfortable life, replete with items of consumerism that provoke deep existential questions. I want friends discussing me worriedly, B-carding their recommended shrinks, and prefixing sentences with ‘sweetie’ every time they talk to me. I want to find a deep void inside me, and then an expensive Guru to fill it with anodyne smiles and pop wisdom. I want drastic changes featuring a motorcycle and a long road trip.

Only it isn’t that easy. Much before I hit my teens, I discovered a ready remedy for emotional upheaval: two-wheeled locomotion. I’ve used cycles and motorcycles in the way some others use therapists. The challenge of balancing an unstable contraption—two points of contact and a stowable stand to make it rest in repose—always restored the balance inside me. (No, I haven’t read Zen and the Art of Motorcycle Maintenance, and I won’t, thank you very much.) Consequently, I have always had a cycle and/or a motorcycle.

Nothing like this, though. The XR1200x is Harley-Davidson’s most recent offering in India. It isn’t your iconic Harley, and I’m so much the happier for it. The low rider with the footpegs swept forward isn’t for me; my circulatory system protests, numbing my feet. When it came to renting a motorcycle, I preferred a Honda tourer for its riding position. It wasn’t easy; Harley-Davidson has become a big idea for motorcyclists. One of the world’s most valued brands, it betokens leisure riding and cool. To miss riding one because of circulatory disability felt stupid.

The XR1200x is a Harley-Davidson for those who are not sold on their big, laid-back cruisers. It isn’t that the company is having a midlife crisis of its own and drastically changing its core constituency. It has merely revived an older line of flat-track racers. The XR750 was designed in 1970 to beat back Japanese and British pretenders on the dirt tracks of the New World. It was quite the success, even if people have not heard of it as much as Harley-Davidson’s famous cruisers.

Dirt track ancestry means the riding position is not very kind on somebody looking at a midlife crisis. Having the footpegs directly beneath the seat agrees with my circulatory system. But the handlebar is short, requiring the back to arch forward. This is essential for agility while riding a sporty bike. A dirt track requires the handlebars to be wide, sturdy and high, not low, twitchy and narrow pegs like in MotoGP or café racers. It makes a big difference when cornering on real roads, which was a worry as I rode out of the showroom.

There is good reason for the cliché that American vehicles prefer to go in a straight line: they are designed for smooth straights on an empty continent. The XRx, I’m happy to report, does not threaten dire consequences at corners. In fact, the cornering feels better than one would expect in such a large motorcycle, and once you get a hang of the weight you can begin leaning into tight corners. The ride is comfortable, provided one doesn’t press one’s weight forward onto the handlebars.

That, however, was not easy for me. With 1200 cc of engine displacement under my loins and two sets of disc brakes on each wheel, I was dallying with throttle happiness. The acceleration is savage and it doesn’t take long for city roads to end rapidly. I took the XRx out on the highway, but then I got lost; it was difficult to read the road signs because they flew past so quickly. All this excitement meant I was putting way too much weight on my hands, which along with frequent pressing of clutch and brake led to aching hands. It took a couple of days to adapt my body to positions more agreeable.

The XRx has the newer Evolution power plant. It is not as noisy as the older engines, but it does feel and sound like a Harley. A small radiator cools the engine oil, but this remains an air-cooled motorcycle—and sounds like one. Before people can see what’s pulled up next to them at a traffic signal, they know it’s something special by the growl. Your arrival is announced. The road respect is incredible, and there’s enough power to overwhelm those who must have it rubbed in. There is reassurance for manhood in the knowledge that you are the fastest thing on the road (if there are any Suzuki Hayabusas in Delhi, they definitely got scared by the growl, I tell my friends).

The growl, however, is what you get in exchange of rapid engine cooling. If you are stuck in a traffic jam, the heat can lightly toast the insides of your thighs—but those contemplating an escape from a midlife crisis are saved the worries of falling sperm counts. Talking of which, I tried to gauge the interests of the fairer sex in somebody riding an XRx—I didn’t want to, but professionalism demands that all aspects of motorcycling be tested in the interests of fairness. There is now scientific data to prove womanly happiness is directly proportional to the position of the needle on the tachometer. Protection is recommended after the engine crosses 3,000 revolutions per minute—and it goes up to 7,000 RPM.

There are social benefits, too. I ride up to the Taj Man Singh hotel in New Delhi, from the gates of which I have been shooed away rudely for riding a motorcycle. The security guards are unsure about stopping me on an XRx, and their supervisor takes off his shades to get a better look. He can’t allow me onto the porch, but he lets me park inside, next to several Audis and BMWs.

A friend of the female persuasion tells me she’s having the rottenest day in a long time. I ask her to hop on behind and chant an invocation to the XRx’s accelerator. The first to get left behind in a trail of exhaust smoke is her frown, followed by her kidneys and her liver. I reassure her with details of the XRx’s unique safety features. (For example, if you get flung from the motorcycle, the engine cuts out automatically. I imagine if I were to accidentally fly off the XRx at about 150 kmph, it would be comforting to know that the motorcycle will not come chasing after me to crush the bones that survive the fall.)

Negotiating such excitement replaces the careworn creases with an ear-to-ear drawn smack in the middle of my friend’s face in a matter of 15 minutes. I take several friends for rides in the interests of socialism and an equitable distribution of joy. The XRx is the kind of motorcycle that allows you to go from feeling like a medieval horseman crossing the Khyber Pass to feeling like Santa Claus. People are scared of motorcycles like they are scared of the truth. Neither is very easy on mediocrity.

Safe to say a midlife crisis is worth every pill of Prozac if it can land you on the seat of an XR1200x. The joy is worth the pricetag: Rs 12 lakh. But this is not a motorcycle for those looking for an image makeover. Be warned: this actually has the power to overhaul your life.