A First Timer in Kashmir 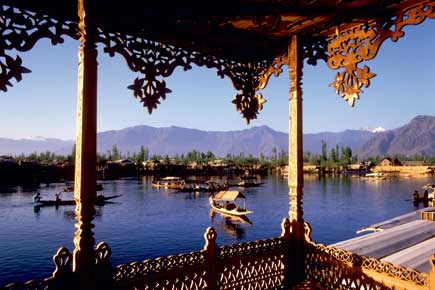 
Since I knew very little about houseboats in Srinagar, I did what all rookie travellers do—a recce on the web. I went to Tripadvisor to check out what others who had lived in them had to say. I went to websites like Cleartrip and Makemytrip to find out what they cost. I did this only to get an overview. I distrust the net when it comes to travel recommendations. I had gone to Bodh Gaya last December based on net research and had landed in a hotel whose definition of ‘hot water’ was slightly different from mine—they seemed to think anything that was not ice was hot. And it was cold wave time in Bihar. Also, from eight in the morning, some sort of machine, a generator I think, started chugging along like a train on amplifier. Plus my window looked into a puddle over which was an ugly grey wall.

Before going to Srinagar, I also did what people with common sense should do—I asked around. Except that unlike people with common sense, I had procrastinated till the last minute. I naturally didn’t get a wealth of sources. All I got was a name of a friend’s friend’s friend: Major Aslam. I had no idea who he was except that he could arrange a houseboat. I assumed, without any basis whatsoever, that he was a retired soldier who owned one. On the phone, he told me that he had booked a room in a deluxe houseboat called Potomac. It would cost Rs 3,500 per night, breakfast and dinner included. I sealed the deal over an email, and from a Mumbai that was perspiring around its brows, landed at a Srinagar that had Major Aslam standing with a placard. All my assumptions were wrong. Major turned out to be his name. He wasn’t a retired soldier. He was not even old enough to retire. Major Aslam was the proprietor of a travel agency named Met Kashmir.

On the road to the houseboat, he took me through Srinagar. Nothing really sets Srinagar apart from other cities. The roads are narrow. The architecture is all over the place. The buildings crowd each other, and together they crowd the road. Chaos hangs like an alter ego, never apparent but always there. There was some Army presence, but considering its reputation, it was not obtrusive. Within this city was the Dal Lake, whose perimeter, I was told, ran 20 km, with Srinagar flaying out from its edges.

A houseboat is a confusing label. In Kerala, if you book a houseboat in the backwaters, it moves. The ones in Srinagar stay put. They are hotels. Not your usual hotels, but hotels nevertheless. You can stay on a houseboat on either the Dal or Nigeen Lake, which is a little offshoot connected to the Dal by a canal. Dal houseboats are usually cheaper, but they are stationed at busy crowded points. The Nigeen is calm, silent and more expensive but worth it. The Potomac, or New Potomac as it turned out, was on the Nigeen.

Like all houseboats, it was made of wood from deodar trees. It was light brown on the outside. Inside, it looked like a slightly poor Arabian sheikh’s tent. The floor was laid out with carpets end to end. The cushion covers were dark red and ornately designed in whirls and whorls. There were plastic flowers on small roundtables whose wood, you could see, would cost a fortune. There were altogether eight sockets for bulbs but just one dim bulb in one of them. There were four sofas, two chairs, three coffee tables, a desk and a TV set—all in one living room. There were also two bedrooms, one pantry, a dining room, a verandah that overlooked the lake, and an upper deck. And in this palace, there was one single person—me, because the other bedroom was unoccupied and the one-man staff was yet to return from his leave.

Do note here that I went at the beginning of April. In May and June, it is full-blown travel season and it would be almost impossible to get houseboat accommodation unless booked a couple of weeks in advance. This was not how it always was in Kashmir. For about one-and-a-half decades, starting 1990, tourism here was at a standstill.

Having arrived at the houseboat, there is really nothing to do. You can look at the lake’s waters shimmer in the sun, but how long can you do that? It was late afternoon. Major Aslam suggested a shikara ride, and almost within minutes, there was one languidly approaching us. A shikara is a small boat. It costs Rs 300 an hour and it is money well spent. In any case, it was the only thing to do. We stepped into it from the back of the houseboat, and gently ambled along.

Navigated by a man called Imtiaz, the little boat went past the houses of those residing bang in the middle of the lake on little man-made islands. “Many of them have been relocated,” said Major Aslam. “But it’s happening at a very slow pace.” We crossed the canal and entered the Dal. We moored near the Hazratbal mosque and got out. It was being repaired and so its dome was covered with wooden pilings. Inside, Major Aslam started to identify spots where encounters had taken place. At the other side was another terror tourism point, tombs of some Kashmiris killed by the Army.

On our return ride, Imtiaz rowed the shikara into what was a floating jumble of shops. One boat had a banner that announced ‘Memory Cards’. There were grocers and souvenir sellers and butchers and chaiwallahs, all jumbled together with a narrow waterway inbetween like a street of water. We crossed Hotel Leeward, where VS Naipaul had stayed in 1962. The hotel was now home to the Central Reserve Police Force, and its barricades made it look ugly and forbidding. On our way back, I saw men sitting on a boat and using a stick to pull out lotus roots. “If you come in the early morning, there is a floating wholesale vegetable market,” said Major Aslam. I asked for Imtiaz to come the day after morning.

That night, I met the New Potomac’s owner, Ali Mohammed, a genial old man. He rapped the houseboat’s wall with his knuckles. “It is not possible to construct a houseboat now,” he said, “Thirty years ago, this wood cost me Rs 100 a square foot. Now it is Rs 2,000.” During troubled times, the houseboats along the Dal and Nigeen lay empty. Ali Mohammed’s sons became salesmen. One of them moved to Amsterdam, selling textiles.

It was cold at night. There was no heater, but thankfully, I found a hot water bottle laid under the blankets to keep me warm.

The next morning, I hired a jeep, and with Major Aslam in tow, headed to Gulmarg. It’s the most touristy thing to do. There are several roads in different directions from Srinagar to popular tourism destinations some 50-150 km away. The main ones, apart from Gulmarg, are Pahalgam and Sonmarg.

Gulmarg is 70 odd km from Srinagar, and if you set off early, shouldn’t take you more than two hours. We left at 10 in the morning and got caught in the mother of all traffic jams. The air alternated between torrid hot to overcast cool. And then it began to pour. The drive turned beautiful once we neared the mountains. For a stretch, there were mustard fields and apple orchards along the road. We went up an incline and turned a corner to be suddenly greeted with resplendent snowclad mountains. At their feet stood pine trees arrayed in battle formation. On the way, I hired snow boots and a snow coat for Rs 150.

At Gulmarg, once the skiing season is over, the only thing to do is ride a horse or take a cable car that’s quaintly called a ‘gondola’. Most horse owners here are extortionists, according to Major Aslam. You would do well to negotiate. “I warned one of my clients, but he didn’t listen,” said Major Aslam, “They took him for a ride and then demanded Rs 6,000 after a few hours. There was nothing to do but pay up.”

The cable car ride takes you further up the mountains, and it’s a good idea to book tickets at the J&K Tourism office in Srinagar if you want avoid the queue in Gulmarg. It was raining heavily and I had to wait for the weather to clear, but once I was hauled all the way up and stepped out of the gondola, there was a snow mountain waiting for me. These are the slopes down which skiers ski, but by May-June, most of the snow is gone.

Back in the houseboat that night, Ali Mohammed made Wazwan, a traditional Kashmiri repast, on my request. There were two types of meatballs in gravy, a kebab, a mutton dish, some sort of chutney, dal, rice and chapati.

The next morning, Imtiaz was to come at 5 am, but didn’t. Ali Mohammed told me later that there had been a storm and the wholesale market didn’t happen. But the skies had cleared and I asked him to call for Imtiaz’s shikara. And so I went for another ride. This time he took me through another series of canals, a watery maze of local habitation. There were homes, some of which looked decrepit, on either side. “Kashmiri Pandits stayed here,” Imtiaz said, “Many have returned, but some houses are still vacant.” As we rowed deeper, the waters turned turgid. This was no Venice. On our way back, once on the Nigeen, Imtiaz stopped on what looked like a rectangular slice of land enclosing water within it. To my surprise, he jumped onto it and stood up. “It’s a floating garden,” he said. There was nothing garden-like except grass on it, but it would soon be used to harvest vegetables, he assured me. Within the floating enclosure, lotuses would be harvested. Every patch had an owner. In April, the lake has little but algae to offer. But come June and July, the algae sink and the lotuses bloom. “All this will look like a stream of gold,” he said, pointing to the lake’s ripples.