India’s higher judiciary is on a course correction 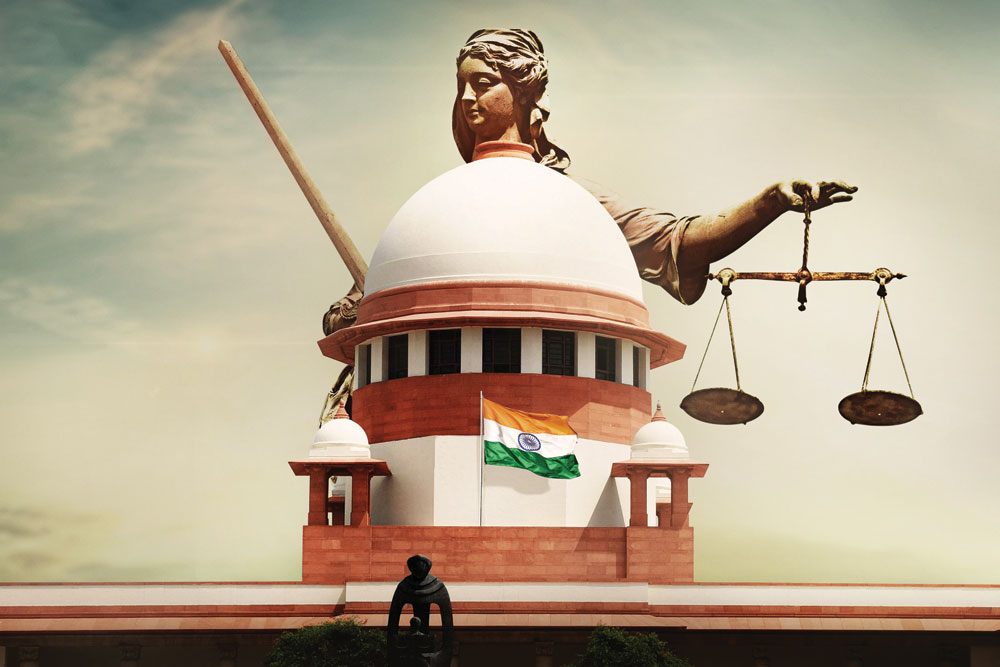 IT IS RARE TO SEE expressions of collective surprise in India’s highest court. The proceedings are calm and the deliberations have the least amount of emotion, as befits the forum. But October 1st was an exceptional day. The occasion was a hearing on a petition challenging the validity of the abrogation of Article 370 of the Constitution. The Union Government, represented by Attorney General KK Venugopal, sought four weeks to file an affidavit in the matter. The petitioners, along with other matters relating to developments in Jammu and Kashmir (J&K), wanted to give the Centre and the state governments no more than two weeks. In the event, the court granted what the Centre wanted.

“We have to allow the Centre and the J&K administration to file counter-affidavit otherwise we can’t decide the matter,” the bench led by Justice NV Ramana said.

There has been much hand-wringing over this and other matters where the Supreme Court and other parts of the higher judiciary have displayed caution and have been sensitive to the Centre’s concerns. In the matters related to J&K, petitioners wanted a ‘quick resolution’.

In the weeks since then, this hand-wringing first turned into anger and ultimately into despair at ‘inaction’ on the part of India’s highest court. Some lawyers and observers even dubbed this as a ‘doctrine of judicial evasion’ while dealing with difficult questions that involve politically sensitive matters. The contention of these persons is twofold. One, the courts must act with great urgency in matters involving personal liberty and, two, where substantial questions of constitutional law or public importance arise, the judiciary must make all efforts to decide these questions promptly, certainly before these questions become academic.


The risk of harm to the country has to be weighed against the freedom of its citizens. The courts have approached recent matters keeping in mind this trade-off instead of looking at the cases merely from the perspective of individual rights, displaying sensitivity to the government’s perspective

These questions gained salience after the first week of August when the Union Government revoked Article 370 that gave a special status to J&K. What was left unsaid while making the claims of judicial evasion, however, was the concern of ‘entanglement’ of these issues with questions of national security. Here, the risk of harm to the country has to be weighed against the freedom of its citizens. The courts have approached recent matters keeping in mind this trade-off instead of looking at the cases merely from the perspective of individual rights. In doing this, they have displayed a degree of sensitivity to the Government’s perspective in cases brought before them.

But all this has left a deep sense of unease even among objective observers.

“Slightly sensitive is an understatement,” says Vikas Singh, a former President of the Supreme Court Bar Association. “The judiciary is the last hope of the common man. The impression that is being created now is that the Government controls the judiciary. This undermines faith in the institution. This is best avoided.” Singh made these remarks when Open asked him about the clutch of cases on J&K.

Much of the disquiet has to do with these cases. Since August 5th, a string of petitions has been filed on issues ranging from detentions in the Kashmir Valley, the communications blockade imposed there, to the constitutional validity of removing Article 370. Petitions related to the last of those cases were among the very first ones filed on August 8th. A week later, there came the petition filed by journalist Anuradha Bhasin on the communication blockade. Since those initial cases, a number of other petitions have been filed. All these cases are being heard and are at different stages of the judicial process. The grouse about ‘judicial evasion’ is that these are not being disposed of at a sufficiently fast pace.

This is only partially true. Sitaram Yechury, the General Secretary of the Communist Party of India (Marxist), approached the top court after he was barred from entering Srinagar. He then filed a habeas corpus petition claiming his party colleague, Yousuf Tarigami, was unwell and he was not allowed to meet his colleague. Within days of the first hearing on August 23rd, the court ordered that Yechury be allowed to visit Kashmir and asked him to file a report before it on his return. The communist leader did so on September 2nd, four days after his visit. In all, in less than 10 days from the initial hearing, the entire process—including the relief that Yechury demanded: permission to visit Kashmir—was granted. Later, Tarigami was brought to Delhi on medical grounds and provided the necessary help.

This case alone points to the weaknesses in the claim of ‘judicial evasion’. What has changed in a very clear manner is the way in which courts deal with the interests of the executive in a large number of sensitive matters. These include: the manner in which judicial appointments at the senior level is carried out, environmental litigation where very often the side of the executive was ignored for a long time and public interest litigations. In these cases, changes have been visible—very clearly—from the tenure of the last Chief Justice of India Dipak Misra to the present one, Ranjan Gogoi. The allegation, made very often by liberal observers, is that a very strong executive and its allegedly ‘overbearing’ attitude have had an effect on the higher judiciary.

There is a debate on this and not everyone agrees that the executive now has an outside influence that has changed the nature of judicial decisions in most cases.

“It is important to understand that deference is a perfectly acceptable attribute for the judiciary. We don’t want a judiciary that is deciding questions of policy, be it where the military is to be stationed or whether diesel cars are to be allowed on the roads. These are decisions for the Government, to which the judiciary ought to ordinarily defer,” says Arghya Sengupta, Research Director at the Vidhi Centre for Legal Policy, an independent think-tank. Sengupta calls this Type A deference on the part of the judiciary. This, he says, is “largely missing with judges of the Supreme Court and high courts [with some notable exceptions] quite willing to intervene in such policy decisions”.

“Where deference is wrong is if the court is cowed by the Government and is unable or unwilling to exercise its independent judgment,” he adds. He terms this Type B deference.

“There is certainly a perception that in the last two years, the court has become more Type B-deferential. This is less to do with its judgments and more to do with the administration of the court,” Sengupta tells Open. “Bail pleas get long dates, habeas corpus matters are not taken up urgently, questionable appointments are made etcetera,” he adds.

At one level, the trend of judicial deference does seem to make the charge of an ‘overbearing’ executive appear to be true. This is certainly the perspective one gets if one sees cases of a recent vintage over the horizon of the past two-odd years. But this period of judicial deference must be seen against the light of weak and fragmented governments since the late 1980s. From that time onward, the courts have been virtually independent to the point of being a parallel centre of power in India. To give one example, in the original Constitution, the executive had a say in judicial appointments even if it had to consult the higher judiciary in making them. By the 1990s, this position had been overturned by a series of judicial decisions to the point where the Government had to agree with what the courts wanted. ‘Consultation’ with the higher courts turned into their ‘concurrence’ . In the last few years, the pendulum has swung in the opposite direction once again.

These instances can be multiplied. Consider the cases around the Aadhaar issue. Originating in September 2013, the matter was finally settled four years later. By that time Aadhaar had developed into an ecosystem where it was used for multiple purposes from banking to welfare schemes to even standalone identity purposes. A similar fate awaited the demonetisation litigation. Here the court refused interim relief and the matter finally headed to a constitution bench. By that time, events had overtaken the proceedings, which thus became infructuous. To this list can be added the cases on electoral bonds—that allow individuals to make anonymous contributions to political parties—and litigation over the constitutional status of Delhi. In all these cases, either the passage of time has rendered the matter superfluous or—as in the issue of the Delhi cases—the matter remains pending.

One way to look at all this is to say that deference/evasion is at work. The other is to realise that elected governments have a say in these cases and they cannot be settled by ignoring their interests. What makes these issues complicated is that they are ‘entangled’: they are not open-and-shut matters of injustice on the part of the executive but affect it in far-reaching, political ways. The Delhi case, for example, is not just about Article 239AA that makes special provisions for the national capital. After Arvind Kejriwal returned to power in 2015, conflicts between the elected government and the Lieutenant Governor of Delhi—the administrator of the city—increased dramatically. Before Kejriwal, such conflicts were limited to administrative differences. They were not the stuff of political fights. The new state government decided to take the matter to the Supreme Court in a bid to assert its right. The time taken to decide these cases and the limited nature of the relief given by the court were interpreted as another instance of deference to the Union executive.

Ideally, political matters—such as the Delhi one—are to be settled in the forum meant for them: Parliament. But during the era of fractured electoral verdicts, this kind of ‘politics’ found another arena: the courts. In an ideal world, these matters fall strictly in the domain of the Union legislature. But for reasons of asymmetric political strength—such as the one between Kejriwal and his party, and the BJP on the other hand—the weaker party chose another route to get what it wanted. The moment for using that option, however, ended when a decisive electoral mandate returned at the Centre in 2014. Call it by whatever name—strong executive, decisive electoral verdict and so on—the danger posed by this conflict of wills came perilously close to breaching the separation of powers among the executive, the legislature and the judiciary.

“When it comes to boundaries, I will be the first person to respect that. And I have fought for the rights of governments in this respect. But that is not the impression one gets now,” says Singh when asked about the danger of erosion of separation of powers. He was referring to his time as Additional Solicitor General in the Supreme Court during the United Progressive Alliance (UPA) Government when he forcefully argued in favour of the latter during the era of judicial ascendency in India.

Might all this be a passing storm as India reverts to its ‘old normal’ of a balance among the three wings of the state? As matters stand now, that is how it seems even if the level of disquiet among legal professionals borders on pessimism. Viewed from a longer perspective, the judicial system is merely returning to a situation of balance between itself and the other wings of the state. The anxiety emerges only when one takes a short-term perspective on judgments delivered in recent years.