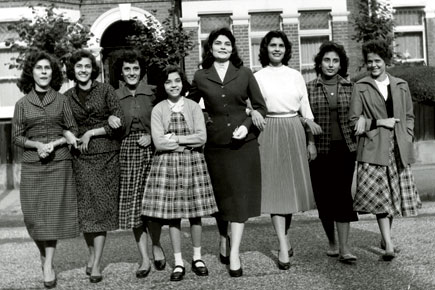 The 13th Duke of Bedford wrote that ‘living in an English way is more important in India today than it was in the times of the British Raj.’ That was in the early sixties. It’s tempting to suggest that had His Grace been living (he died in 2002), he might have written that living in an Indian way is more important in England today than when India was the brightest jewel in the British Crown. But that would be political propaganda.

Robin Cook, the former British foreign secretary, gained instant notoriety by declaring chicken tikka masala the favourite national dish. Immigrant voters, to say nothing of 1.2 billion Indians, lapped up the compliment. They didn’t know that in wooing voters, Cook was also upstaging his boss’s wife, Cherie Blair, who had already endeared herself to South Asian constituents by draping herself in a sari. Indian, Pakistani and Bangladeshi restaurateurs have been squabbling ever since over the copyright for chicken tikka masala but that’s another story. England is too secure in its cultural moorings to make significant concessions to foreign lifestyles, whereas India on the make knows that globalisation is Westernisation. Language is its simplest manifestation.

The wheel has turned full circle. In the high noon of Empire, anglicised Bengali barristers spoke lovingly of England as ‘Home’ while swadeshis chanted ‘Down with English imperialism!’ Now, the Delhi ‘puppy’ thinks salwar-kameez is exotic ‘ethnic’ wear and sneers at a bureaucrat as a ‘babu’ in the colonial idiom of ‘a native clerk who writes English’. With his intimate knowledge of England, VK Krishna Menon acidly remarked the English were obviously highly developed since they all spoke English. We are catching up.

Indira Gandhi once mentioned two knowledgeable Englishmen in India arguing whether tashri or rakabi was the right word for a small salver. Unable to decide, they asked their bearer. “Huzoor” the man replied, “hum toh isko ‘palate’ kahte hain. (Sir, we just call this a plate)” In a not dissimilar vein, Chandra Shekhar once dismissed an Uttar Pradesh minister as a ‘stepney’ minister. For those who are not familiar with Hinglish, the target of attack was being derided as a car’s redundant fifth wheel.

The spread of English indicates I was mistaken some 50 years ago in pronouncing with the conviction of youth that India’s English-language newspapers were doomed. I compared them to Delhi’s Red Fort or the Victoria Memorial in Kolkata, imposing monuments to alien grandeur with few links to surrounding reality. My mistake was to assume idealistically that survival depended on quality.

I had no idea then that the distinguished English critic and scholar Humphrey House, who worked in Calcutta and declared his Bengali was improving tremendously because he read the English-language Amrita Bazar Patrika every day, was the victim of a devious Bengali trick. Asked why his paper’s language was so appalling, the Patrika’s editor and owner, the venerable Tushar Kanti Ghosh, replied that the British were our enemies. Since he couldn’t hurt them in any other way, he was doing his best to destroy their language. In short, the empire was writing back.

John Wain, the novelist, would give Ghosh full marks for succeeding. In a 1961 article on Indian English in the monthly Encounter (defunct like the Patrika and damned since it was avowedly funded by the CIA) Wain argued that Indians had only an ‘insecure grip on the idiom’. He added that being the lingua franca, Indian English ‘lacks the finesse of nuance.’ He was right.

The multitude has no use for idiom or the finesse of nuance, isn’t it? English bhasha is an Indian language only. When he was viceroy, Lord Hardinge of Penshurst sent King George V what he called an ‘oriental gem’. It was a letter of apology that read: ‘Rajah Pyari Mohan Mookerjee regrets that the sudden aggravation of the pain in his legs caused by the proximity of the full moon prevents his attending the Levee.’

If India has 22 official languages and 398 others (including 11 that are extinct) it must also have 22 recognisable and 398 unrecognisable variants of English. The 11 extinct versions probably include the ‘English English’ free of the ‘corrupting influence of American English’ of Prince Charles’ dreams.

Familiarity with the vernacular helps understand Hinglish, Benglish and the other Englishes that have taken sturdy growth in native soil. Regional variations can sometimes hamper communication. People outside Bengal are convinced that Bengalis see red at the word ‘nonsense’. But nonsense has no special connotation, derogatory or otherwise, for English-speaking Bengalis. It is deadly abuse only for non-English-speaking Bengali equivalents of Mrs Gandhi’s bearer. Since class matters more than caste in Bengal, this can lead to serious misunderstanding, as when a well-meaning Delhi hostess asked a Calcutta memsahib if nonsense was a no-no word. ‘What nonsense!’ the Calcutta memsahib exclaimed, leaving the Delhiwalla (or should it be wali?) convinced she had given grave offence. There must be many such instances across linguistic divides since cadence and construction make Tamil English as different from the Punjabi brand as the Geordie dialect of England’s Tyneside from a Devon burr.

C Rajagopalachari shared my reservation about English-language newspapers, albeit for altogether different reasons. When the first edition of The Indian Express appeared on 5 September 1932, among the goodwill messages was one from Rajaji who wrote with his customary asperity: ‘If you had asked me for advice, I should have warned you against now putting money in the English language.’ He warned that the English readership was old-fashioned, timid and indifferent to public issues. The future belonged to the masses ‘and this means that the educational and news service must be in Tamil inside our own province and in Hindi outside.’ Since Rajaji himself wrote superbly lucid English, he had no inkling of the social aspirations that prompt ordinary folk to say ‘palate’ instead of tashri or rakabi.

Nor would he have understood the commercial and political dimensions of this yearning to be a sahib. If ‘the noblest prospect which a Scotsman ever sees is the high road that leads him to England’, the Devyani Khobragade controversy confirms that a flight to New York is the noblest prospect for many Indians. An American visa becomes much simpler if the interview can be conducted in English. Nowadays, Mamata Banerjee sounds quite fluent in her TV appearances, thanks, it’s whispered, to private lessons in conversational English. Can Narendra Modi be far behind?

The East India Company official who warned that the British were ‘paving the highroad’ for their own ‘return home’ by teaching Indians English didn’t realise that English education was another clever Bengali conspiracy. Raja Rammohun Roy and the Anglicists who outmanoeuvred the Sanskritists in lobbying Macaulay over the medium of instruction didn’t want to drive the British out of India. They were getting ready to drive Indians to America where they would be reborn first as NRIs, then PIOs and ultimately as OCIs which is an improvement, surely, on the merely twice-born?

That is why there are no takers for Raj Narain’s exhortation to ‘drop the tie and wear the loincloth’ because ‘otherwise the Indian culture will die’. Loincloths are not appropriate to North America, the home of India’s deathless culture. Groups like the Hindu American Foundation had to tip off the Shiksha Bachao Andolan here about Wendy Doniger’s blasphemy. Bankim Chandra Chatterjee had this influential community in mind when he predicted Durga Puja mantras would one day be recited in English.

It might have been Persian at one time. Place names like Kolkata’s Sudder (‘Sadr’ from the Sadr Dewani Adalat) Street and a range of legal terms remind us that Persian was the court language under the Mughals. The Bengali pejorative ‘ujbok’—which my father hurled at me whenever I did something especially stupid as a boy—is another relic of that forgotten era. I realised it meant a duffer but no more until the erudition of the late Nurul Hasan, who died as governor of West Bengal, lightened my ignorance. Apparently, the original Uzbek (‘ujbok’ is our Bengali mispronunciation) was the ultimate pejorative in the aristocratic (and racist) Persian’s vocabulary.

Our internalisation of the word isn’t the only evidence of unthinking servitude. PV Narasimha Rao told Singaporeans in 1994 that India had absorbed every conqueror, save the last. He should have added that roles were reversed and the last conqueror tried to absorb Indians but found them as indigestible as chicken tikka masala. Zhou Enlai called language ‘a means of colonisation’. But with Queen Victoria learning Hindustani and Mahatma Gandhi speaking in English, the colonisation was half- hearted. Hence, the infelicities with which our newspapers are studded, the many examples of cultural disorientation and social insecurity, and the linguistic fumbling of upwardly mobile Indians.

Paying tribute to the noted anthropologist Verrier Elwin in The Telegraph on the 50th anniversary of his death, Ramachandra Guha wrote that ‘he came out to India’. Would a native English-speaker ever have written that Mahatma Gandhi or Jawaharlal Nehru ‘came out to England’? No! Self-respect would never allow him to use a form of words that implies England is the Outer Darkness to which visitors ‘come out’ from the sparkling metropole to which they, as well as the writer, belong.

Only some Englishmen in India might use words that suggest a degree of contempt for the immediate surroundings. It would be deliberate. The Indian who does so either speaks ‘a mutated language’ (Patrick French’s description of the linguistic legacy of the Raj) or pretends to be what he is not. Either explanation points to crassness, justifying Malcolm Muggeridge’s mocking remark that the last Englishman would be an Indian. As the East India Company burra sahib told a young recruit who asked about the Company’s preferred language, it was ‘Hum- drum’. And hum-drum it’s been ever since, hasn’t it?