Up, up and away Go Food Prices

Netas will pass the buck, trot out excuses and do the usual neta things, but food prices are not coming down in a hurry. 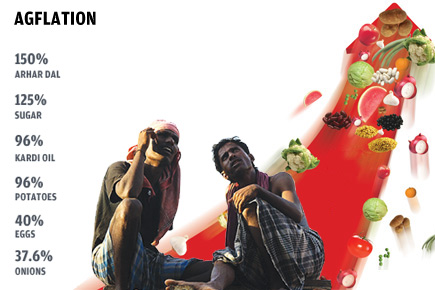 Netas will pass the buck, trot out excuses and do the usual neta things, but food prices are not coming down in a hurry.


It wasn’t until the Government’s data revealed that food prices were up nearly 20 per cent over last year’s figures, pushing overall inflation in India up, that the political outrage began. Now, the political din on food prices is set to get louder. On 15 December, opposition Members of Parliament (MPs) stalled proceedings in the House to protest the steep rise in people’s grocery bills. The Left and Bharatiya Janata Party (BJP) led the Lok Sabha and Rajya Sabha fist-waving and table thumping. The Union Government, for once, seemed to be getting it from both the left and right. Incidentally, less than a month earlier, on 26 November, not even 100 MPs—counting both the treasury and opposition benches—were present in the House for a debate on rising prices. In fact, when the debate began in the afternoon that day, less than 30 opposition MPs were present. “Attendance is a concern, but the opposition does raise important issues like price rise that concern the people,” says Arun Jaitley, Leader of the Opposition in the Rajya Sabha. The Left, on its part, has declared an agitation against the Government on the issue, starting March.

Of course, Government leaders too have been quick to make statements that hide more than they reveal. Since the uproar in Parliament, Union Agriculture Minister Sharad Pawar blamed everyone else except his own ministry and government for a failure to arrest prices. At a meeting of party workers last Sunday, Pawar said it was for the states to control rising prices.

“I appeal to all state governments that they should take the issue of price rise very seriously to protect the interests of consumers, or it will be difficult,’’ Pawar said at a convention actually meant only for members of the Nationalist Congress Party (NCP). After squarely blaming the states, he then turned the heat on global warming and climate change. “Rice production has been affected,” he said in New Delhi, “Global warming has affected sugarcane and vegetable crops. We are observing that prices in all these areas have gone sky high. These items have gone up in the international market as well.”

A couple of days before the Agriculture Ministry adopted its states-are-to-blame stance, Finance Minister Pranab Mukherjee had told reporters: “Food prices are going up and this is an area of concern. We have to take some appropriate measures, but the best could be done by augmenting supply through imports.” On the same day, he told Parliament that the Government is monitoring the price scenario and containing inflation is high on its agenda. Speaking in London on 9 November, Mukherjee had forecast that rising food prices would take “about a month” to come down. “We have taken adequate care to maintain the demand and supply position by allowing commodities of shortfall to be imported without any duty,” he had then said, adding that the overall agricultural scenario is bright.

Politicians will be politicians. But experts say there are a variety of reasons why consumers should get ready to pay more for food in the coming years. “We are now going through stagnation in productivity,” says Professor MS Swaminathan, Rajya Sabha MP and the man credited with India’s Green Revolution, “because for three decades, we lived with the erroneous feeling that we have solved our problems and no more needed to be done.” But while supply stagnates, demand is only moving up. The country’s foodgrain production fell by 1.6 per cent last year, and this year, as a result of the worst domestic drought seen in 37 years, the count is likely to fall by more than 2 per cent.

Globally, production is expected to decline about 2.5 per cent. The United Nations Food and Agriculture Organisation (FAO) released its Global Food Outlook on 9 December with a warning: ‘Global food prices are on the ascent again with the FAO Food Price Index—a food basket composed of 55 commodities including cereals, oilseeds, dairy, meat and sugar—registering four straight monthly rises.’ Simply put, prices have shown an upward trend over the last four months.

The FAO report cautions that though market conditions are different from those that triggered the food price crisis two years ago (which led to food riots in Egypt and Haiti), there are troubled times ahead. ‘The index averaged 168 points in November, the highest since September 2008,’ the report says. Pre-2008, it was mostly below 100 points. The FAO food price index began rising sharply in 2006. Last year, the index was 57 per cent above 2006 levels. So, in a world rattled by recession, consumers were paying more than one-and-a-half times what they did for food just two years ago. In 2009, the trend continues, with the added threat of spikes, the FAO warns.

This is a shock. From the late 1980s to the beginning of this decade, prices were roughly static. The average upward trend rate of 1.3 per cent for the period 2000–05 has jumped to 15 per cent since 2006. In other words, it’s a global phenomenon, and the Government’s claim that imports will ease prices is not entirely true. “Imports are not cheaper anymore. World prices were depressed ten years ago. Today, if you go to buy rice in the international market, it will not cost less than Rs 30 per kg,” says Abhijit Sen, member, Planning Commission. The last time India imported wheat (2007), it paid Rs 16 a kg while at home it paid farmers Rs 8.50.

The Indian reality, though more complicated, is linked to the global commodities market. While food prices push inflation up, poor agricultural performance has been a drag on India’s economic growth.

“In India too,” says Sen, “food prices have more or less followed the same graph.” By 2006, the buying power of a 500-rupee note had begun shrinking sharply. From a week’s raw material for a family of four vegetarians, you were suddenly left with enough cash to buy rations only for four days or so. Remember the 2007 surge in cooking oil prices? By mid -2007, cooking oil prices were hovering at Rs 70, up from Rs 36 or so a year earlier. Marketers slyly made cuts in the packed weight of branded food articles like biscuits, noodles and tea leaves, without increasing marked retail prices. The Left launched a similar agitation in early 2008 against inflation along with the erstwhile UNPA. But with political alignments changing and the Samajwadi Party (a principal constituent of the UNPA) defecting to the ruling side, the agitation soon gave way to the Left’s anti-Nuclear deal campaign. And the Indian aam aadmi continued to pay more and more for food.

This year threatens to be particularly bad, and the effects of the drought that affected 312 districts will continue to be felt in the coming months. Pulses like moong and tur have crossed the Rs 100-a-kg barrier. Sugar is up from Rs 18 in the summer to Rs 42 already. Vegetables prices have shown nationwide increases of anywhere from 18 to 140 per cent. As recession slowly recedes, demand is rising. With agricultural production slackening, food prices could soar. Add to this an expected surge in rural demand and you have a crisis at hand. The benefits of ‘Narega’ (National Rural Employment Guarantee Act) are now trickling down to a larger number of have-nots. The poorest of the poor in rural areas—who have merely been statistics in India’s malnourishment and hunger graphs—are likely to buy more food. From this year, the programme covers all 593 districts of the country and the Centre is going to spend Rs 39,100 crore on the scheme. In the last fiscal year, 45 million families were covered under the relief scheme and over Rs 27,000 crore pumped into it.

“As a result of the scheme, the poor can afford to eat a little more now. Data on the impact of the additional purchasing power in rural areas and on the consumption of the poor are yet to be gathered. It is, however, obvious that since our chronic hunger is due to lack of adequate purchasing power, any step which leads to the enhancement of the real income of the poor will lead to greater consumption,” says Professor Swaminathan. Poor households spend up to 80 per cent of their incomes on food; yet, they remain malnourished. Better income translates straight into more wholesome daily diets.

Land available for agriculture, on the other hand, is shrinking. KV Thomas, minister of state for agriculture, informed the Rajya Sabha last week that his ministry’s data shows a marginal decrease in cultivable land. “As per available estimates, the extent of cultivable land has marginally decreased from 182.88 million hectares of 2004-05 to 182.71 million hectares in 2006-07, mainly due to an increase in area under non-agricultural uses such as urbanisation, roads, industries and housing.” Like his boss Pawar, Thomas too was quick to add that it is actually the states that need to do their bit here. “The onus for ensuring that land is not diverted to non-agricultural use lies with the states. As per the Seventh Schedule of the Constitution of India, ‘land’ falls under the purview of state governments,” he said.

“Since 1980, the area of land available for agriculture has remained the same,” says a senior official of the Indian Council for Agricultural Research (ICAR). By its estimates, about 50 million hectares of wasteland can be treated and made cultivable. Abhijit Sen, however, says that the cost of treating wasteland is very high at the moment and that will happen once food prices reach a level that necessitate such conversion. But even on cultivable land, soil fatigue and quality are major concerns. By ICAR figures, 45 million tonnes of nutrients will be needed over the next 15 years if yields have to be raised and in some cases even sustained. Carbon content in the Green Revolution, high-productivity belt of Punjab, Haryana and Western Uttar Pradesh has gone down from 0.5 per cent in the 1940s to less than half. Land under pulse cultivation needs to be treated urgently, adds Professor Swaminathan. India is the world’s biggest producer of pulses, but also the largest importer because our production average is 638 kg per hectare, whereas bounteous countries like Canada deliver nearly three times as much (1,800 kg) per hectare.

Worldwide, the diversion of foodgrain for ethanol and animal feed is also restricting the availability of food for human consumption. The Organisation for Economic Cooperation and Development’s OECD-FAO Agricultural Outlook for 2009- 18, says: ‘Livestock populations are growing and with higher incomes, and particularly in populous countries such as India and China, meat consumption will increase in the future. Therefore, pasture land will remain in high demand and may further limit crop expansion.’ The boom in biofuel demand too will limit the amount of land available for food production, it warns. As consumers in rich countries and well-off ones here raise their demand for meat, more foodgrain will end up in troughs as animal feed. And it takes 700 gm of grain to produce 100 gm of meat.

After 2004, public investment in agriculture has nearly doubled, says Sen, some of which “should start yielding results as early as two years from now”. Not coming from a politician, that’s reassurance. After all, ‘too little food’ is a big part of the agflation problem, ‘too much cash’ chasing it being the other.