Two Sisters and a Brother Sent to Sariska 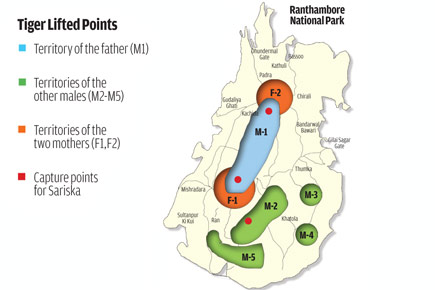 Fiercely territorial, a male tiger does not allow other males to breed with the females residing within his territory


All three tigers, one male and two females, sent to Sariska from Ranthambore were fathered by the Anantpura male (see photo). The two females were born to the Jhalra female aka Machhli and the male to the Chiroli female.

From camera-trapping (photography) census data gathered by Wildlife Institute of India (WII) in 2006, it is evident that the Anantpura male occupied the entire territory where the three tigers picked up for Sariska were born during 2004-2006. Fiercely territorial, a male tiger does not allow other males to breed with the females residing within his territory.

The 2006 WII census report examined 356 photographs of 31 tigers and counted five adult males—two of them (M4 and M5) too young to have fathered the Chiroli male cub already about a year old in 2006. The territories of the other three males (M1, M2, M3) were defined on the map by marking the locations where they were camera-trapped.

The Chiroli male cub, later named T10, was mothered by the Chiroli female (F2). For Sariska, he was captured from within his father Anantpura male’s territory (see capture point on map) in 2008.
The tigresses sent to Sariska are from two successive litters of the Jhalra female (F1). The elder one (T1) was photographed with her mother at several stages of her life and was picked up from within her mother’s territory that she had started to share independently.

The other tigress (T18) moved a few kilometres from her mother’s (F1) territory to find her own space from where she was picked up for Sariska. She was camera-trapped with her mother in the 2006 census. There is also video evidence of her as a cub playing with her parents—Jhalra female and Anantpura male—in a 2007 NHK documentary filmed by Keko More.