The Government plans to announce a Rs 3,000 crore package for the handloom industry in the Budget 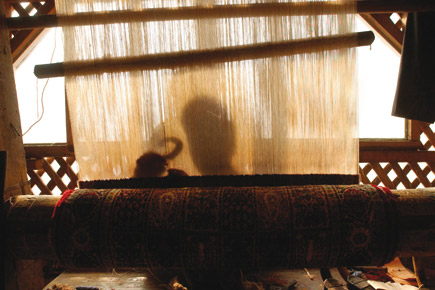 The Government plans to announce a Rs 3,000 crore package for the handloom industry in the Budget


Three years after the mega loan waiver for farmers, the UPA Government is planning a comprehensive relief package for crisis-stricken handloom weavers.  Like farmers, India’s weavers too have witnessed a series of debt-driven suicides in recent times. The tragedy is most acute where the stakes are highest for the Congress —Uttar Pradesh, seen as the state enroute to Rahul Gandhi’s fabled journey to 7 Race Course Road, and Andhra Pradesh, which accounts for a sizeable number of Congress lawmakers in UPA-II, as was the case in UPA-I.

The relief package—in the form of a bank loan waiver to handloom weavers and subsidies on silk and cotton yarn—is likely to be announced in the forthcoming Union Budget. According to sources, the Finance Ministry has been working on two options for a loan waiver formula, suggested by the Textiles Ministry ahead of preparations for the Budget. This was conveyed by Textiles Minister Dayanidhi Maran to a delegation of senior Congress leaders led by party General Secretary Digvijaya Singh earlier this month. The delegation also included the party’s Uttar Pradesh leaders Rita Bahuguna Joshi and Pramod Tiwari, as well as AICC Secretary Shakil-u-Zaman Ansari.

The two proposals that the Textiles Ministry has suggested are based on a survey it conducted recently to assess the quantum of debt outstanding among handloom weavers. The survey found that the aggregate figure across the country stands at approximately Rs 3,000 crore, and two-thirds of this loan burden (that is, Rs 2,000 crore) is borne by weavers of just six states—Uttar Pradesh, Andhra Pradesh, Bihar, Tamil Nadu, Jharkhand and West Bengal. One proposal seeks a comprehensive loan waiver of Rs 3,000 crore for weavers of the entire country, while the other seeks relief for weavers in just the six major states.

According to the Third Handloom Census carried out by the Ministry of Textiles, which was  completed in December 2010, handlooms provide employment to 2.8 million weaver households across the country.

For the past couple of years, rising yarn prices and shrinking markets for the finished goods of the handloom sector have combined to cause severe distress among weavers, pushing a large number of them into a debt trap.

The crisis is most acute in states like Uttar Pradesh, Andhra Pradesh and Tamil Nadu. Several instances of debt-driven suicides have been reported in weaving community clusters in these three states. Besides the severity of the situation, one of the reasons that seems to have forced the Government to work out a relief package for weavers is the growing realisation that the issue has started taking political shape in Uttar Pradesh, Andhra Pradesh and Tamil Nadu—and all three happen to be crucial states for the Congress.

In Uttar Pradesh, big weaver clusters are located in Varanasi, Bhadohi, Mirzapur, Mou and adjacent districts. These weavers belong mostly to a Muslim ‘backward caste’ of Ansaris, classified as OBCs in official records. The unrest among UP’s Ansaris has been so acute that in the past few months, it has fuelled the meteoric rise of a hitherto unknown political entity called the Peace Party in the state. The fledgling political outfit, which has no representation in the Assembly so far, has already made political heads turn with its performance in the Dumariaganj byelection last June, in which it secured third position, pushing the Samajwadi Party to fourth place and the Congress to fifth position. The Peace Party repeated its good showing in the Lakhimpur Assembly-seat byelection  in November 2010. It stood second, while the Bharatiya Janata Party (BJP) was third and the Congress emerged fourth.

What has made many believe in the Peace Party’s ability to spring some surprises in the upcoming Assembly polls in the state is the fact that Ansari voters, who have rallied round this political outfit, account for over 60 per cent of the total Muslim population in the state. Ansari voters are distributed not just in eastern and central UP, but also in the western belt of the state. This is said to be one of the reasons why the turnout was so unexpectedly massive for a political rally organised by the Peace Party at Baghpat—the western UP bastion of Rashtriya Lok Dal president Choudhury Ajit Singh—on 31 January.

The fast growing influence of the Peace Party is being watched with deep anxiety by the Congress, which fears that a shift in such a large chunk of Muslim voters may upset its poll prospects in the state. It is widely believed that a revival in Muslim support played a critical role in the Congress’ impressive performance in UP in the Lok Sabha election of 2009, and without this vote it might have suffered a fate similar to what it did in Bihar recently.

It is not surprising, therefore, that even before the announcement of the relief package for weavers, senior Congress leaders have started trying to make political capital out of the proposed move and lure Ansaris back into their party’s fold. On 29 January, the Uttar Pradesh Congress Committee organised a rally of weavers at Varanasi which was addressed, among others, by Union Water Resources Minister Salman Khurshid, Digvijaya Singh, Rita Bahuguna Joshi and former Chief Minister Ram Naresh Yadav. Among those present in the conference were representatives from all 60 weavers’ panchayats of eastern UP. In the rally, Congress leaders stressed the necessity of waiving the dues of weavers the very way those of farmers had been. Two days after this rally, a delegation of Congress leaders in UP led by Digvijaya Singh met the Union textiles minister and formally presented weavers’ demands to him.

And all this was done despite the fact that the Textile Ministry had already sent its suggestion of a relief package for weavers to the Finance Ministry.

Uttar Pradesh, however, is not the only state the Congress is getting worried about. The weavers’ crisis has added considerably to the woes of the party in Tamil Nadu and Andhra Pradesh as well, and in both these states the Congress is in dire need of wooing new segments of voters. In Tamil Nadu, where Assembly polls are due in May this year, the Congress and its ally DMK find themselves on slippery ground in the wake of a series of scams. A grand move to uplift weavers is seen by both the Congress and DMK as a poll sop at just the right time.

Though elections are still far off in Andhra Pradesh, the Congress has been caught so helplessly in political whirlwinds of the state that it is already gasping for breath. No doubt, the Praja Rajyam Party’s decision to merge with the Congress has given temporary relief to the grand old party, but 15 suicides by weavers in Dharmavaram district in recent times, together with similar such tragedies in Karimnagar district in the past, have given a huge political turn to the issue of weaver distress in the state.

Also significant for the Congress is the fact that weavers constitute a good segment of the vote base of the Praja Rajyam Party. It is not without reason, therefore, that on 28 January this year Praja Rajyam President K Chiranjeevi made a day-long tour to Dharmavaram, extending financial assistance to weaver families thrown into turmoil by the suicides. It’s the weft of politics with the warp of cash.