Mahendra Prasad is now in his 34th year as a member of Parliament. He has not spoken in the House even once 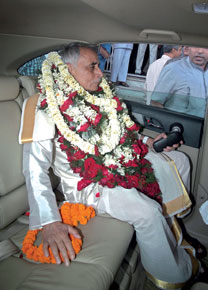 Mahendra Prasad is now in his 34th year as a member of Parliament. He has not spoken in the House even once

In Lutyens’ Delhi, the nameplate at 4 Safdarjung Lane reads ‘Dr Mahendra Prasad, MP’. Several bungalows surround it, including one diagonally opposite that is occupied by former Prime Minister HD Deve Gowda. But of all of them, Prasad’s bungalow is the most imposing. It looks like a fortress with white towering boundary walls topped with barbed wire. Inside, the house has the appearance of a French villa with a spacious porch. Prasad has spent more than 25 years here, having stayed at this address even as he shuffled parties through the decades.

Prasad is a Rajya Sabha MP from Bihar on a Janata Dal-United (JD-U) ticket, serving a sixth consecutive term in the Rajya Sabha. Since 1985, when the Congress first gave him a seat, he has been sent there twice by the Rashtriya Janata Dal (RJD) and twice by the JD-U, his current party. Prasad’s fortunes remain unaffected no matter who rules the Centre or Bihar. His enormous wealth is one possible reason for it; the other is his prescience on which way political winds might blow. On paper, Prasad runs a number of pharmaceutical companies with business spread across several continents. That may explain his nickname: King Mahendra.

His Parliament records show a good attendance of 82 per cent, but, he really does rather little there. He has not spoken in Parliament in all his 33-plus years. He has asked only one question over the past five years and never participated in any debate. His declared assets of Rs 683 crore make him one of the richest members of the House, and his pharma empire is estimated to be worth some Rs 5,000 crore, though no verifiable figure is available. In the years he has been in public life, the politics of Bihar has undergone many a change, seeing all kinds of caste and dynastic dispensations. Only 74-year-old Prasad has been a constant.

He was born in a land-owning Bhumihar family in Govindpur, a village in Bihar’s district of Jehanabad. No one in his village is sure how he became a pharma baron. “He had gone to Mumbai to work in the 70s. Since then every time he came back we only heard stories of his rise,” says an elderly person from his village. In 1980, Prasad fought the Lok Sabha election on a Congress ticket from Jehanabad. The district, comprising mainly farmers, was a Left bastion but Prasad managed to defeat the CPI candidate by 28,000 votes. He went about building his base among the region’s dominant Bhumihars, offering jobs to the community’s youngsters at his pharma companies and doing humanitarian work. But it was not enough to get him re-elected. In 1984, when the Congress registered its largest ever win with 414 seats, Prasad lost Jehanabad. The Rajya Sabha, he soon realised, was an easier route to Parliament.

By then he had developed ties with such Congress leaders as Makhan Lal Fotedar, Rajiv Gandhi’s political advisor who guarded access to him. In 1985, Prasad was nominated to the Rajya Sabha by the President of India on Fotedar’s recommendation. In September that year, he was picked as a poll observer of the party for the Amritsar Lok Sabha election. Terrorism was rampant in Punjab at the time, and he narrowly escaped a a blast that blew up his car in the Batala area, where he had gone to meet Congress workers. In July 1986, he was elected to the Upper House on a Congress nomination, but with the party’s decline in the wake of VP Singh’s rebellion, Prasad decided it was time to switch allegiance to the National Front. Over in Bihar, Lalu Prasad Yadav had emerged as the leader of Backward Classes and he rode that wave after 1989 when VP Singh became Prime Minister. Old caste equations were changing: the Naxal movement was gaining strength and Bihar was in violent ferment. As several caste-based militias emerged to fight the Naxals, Prasad’s Ghosi block stronghold in Jehanabad was one of the worst affected. He reportedly funded the Ranveer Sena, an armed group of young men of ‘upper castes’ such as Bhumihars. Meanwhile, the Mandal Commission agitation had added to the state’s turmoil. With VP Singh and Lalu’s Janata Dal playing the politics of empowering Other Backward Classes (OBCs), Bhumihars opposed them tooth and nail.

Yet, in 1993, when Prasad’s term as an MP was about to end, he got a Rajya Sabha nomination from the Janata Dal. “He has only one thing in abundance, money, and that is needed the most by political parties. His association with Lalu was only based on monetary support he offered,” says a BJP MP from Bihar who has once been with the Janata Dal.

Prasad’s strategy was to remain aloof from party affairs and maintain a low profile—not trying to gain a position of any major standing in the Janata Dal, nor appearing on public forums. In 1997, when Lalu broke up the party to form the Rashtriya Janata Dal (RJD), Prasad joined him. Around three years later, he was rewarded by Lalu with yet another Rajya Sabha term.

Later in 2000, after Lalu was forced out of Bihar’s chief-ministership because of corruption charges against him (and his wife Rabri Devi took over as his proxy), Prasad sensed that the RJD was weakening. The NDA, with the JD-U in league with the BJP, was on the ascent. It was time for another switch.

In 2005, the NDA chose Nitish Kumar to lead the alliance into the Assembly poll arena. But his rising stature within the JD-U was posing a threat to other party leaders like George Fernandes and Sharad Yadav. When Fernandes refused him party funds for the polls, Nitish turned to Prasad via Lalan Singh, his right hand man and currently a cabinet minister in Bihar. Lalan was entrusted with getting Prasad on board because they were friends. It took only two meetings for Prasad to switch over to Nitish’s campaign. (Calls to Lalan Singh by Open for comment went unanswered).

Nitish became the Chief Minister of Bihar, and Prasad made it to the Rajya Sabha as a JD-U nominee in 2005. In April 2012, he was re-nominated for a sixth consecutive term. “Had there been only one seat vacant, I would still have been nominated,” said Prasad at the time. He won unopposed.

For Prasad, A Rajya Sabha nomination has become routine. He maintains his low profile, not interacting with others in the party and rarely attending party functions. “He doesn’t interact with anyone except exchanging customary greetings,” says senior Bihar Congress leader Akhilesh Prasad Singh, also from Ghosi. “As a result, people also don’t know much about him or expect any kind of camaraderie. He is a businessman who lives his own life.”

“I don’t want publicity,” says Prasad. “That’s why I don’t interact with the media. I do my own work and mind my business and that’s about it.” He is close to a few leaders in Bihar such as Abhiram Sharma, the JD-U MLA from Jehanabad, but even they find it hard to get across to him. “It’s very difficult to reach him. He is a big man and keeps on travelling from one place to another,” says Sharma. “I call him when I want to meet him and if he is available, he asks me to come. I never ask him where is he. I know he has lot more things to do.”

Prasad’s main pharma company Aristo Pharmaceuticals has a corporate office in Andheri, Mumbai, with branches in Vietnam, Sri Lanka, Myanmar, Bangladesh and across Africa and Eurasia. He also owns Mapra Laboratories, headquartered in Lower Parel, Mumbai; Indchemie Health Specialties headquartered in Worli, Mumbai; and several other companies across India. He has factories in places like Baddi in Himachal Pradesh, Hyderabad, Sikkim and Daman.

Prasad divides his time between India—mainly Mumbai and Delhi—and abroad. Those who know him say his lifestyle is simple: he wears only khadi ordered from a factory in Gujarat, and is a teetotaler who likes home-cooked food. In party circles, Nitish often speaks about Prasad’s passion for travel. Between April 2002 and April 2003, Prasad visited 84 countries—an average of seven countries a month. Last year, when Nitish called him, he was about to take a flight to Somalia. Nitish requested him not to go, and he returned from the airport.

Prasad also loves reading, gardening and, unusually for a senior citizen: deepsea diving. He got the title, ‘Atlantis Submariner’ in August 2002 from the Atlantis Submarine, a tourism firm, for diving to a depth of 173 feet in the Caribbean Sea. He also won the top prize for the best house garden in Lutyens’ Delhi for 16 years from 1982 to 1997.

Like any good politician, Prasad takes care of his followers. He employs thousands of young people, mostly Biharis, in his companies. When he is in Jehanabad, people queue up with job requests and he tries not to dishearten them. He also has educational institutes in the district. But public life means he doesn’t have much time for his family. “I am like any other person to him and he is as good as a stranger to me,” says Tarun Sharma, his son-in-law.

One of the key factors that has ensured Prasad’s survival is an ability to keep everyone happy. Of course, money helps. As an NDA Lok Sabha MP from Bihar says, “He has mastered the art of using his wealth to fulfil his desire to be in power.”