The Kanchi peeth’s head has been cleared of the deed, but the Varadarajaperumal temple manager’s murder remains a mystery 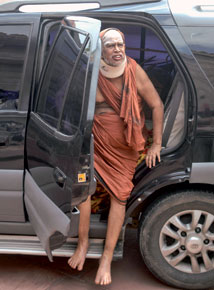 The Kanchi peeth’s head has been cleared of the deed, but the Varadarajaperumal temple manager’s murder remains a mystery

In 2004, a manager at a temple run by the Kanchi peeth started writing letters to patrons, authorities, the media and the pontiff himself that ever since Jayendra Saraswathi took over as its Shankaracharya, this seat of Hindu learning had fallen into disrepute. The manager also made noises about financial misappropriation. Given that Kanchi is one of five seats of Adi Shankara’s Advait School of Hinduism, it had the whiff of a scandal. But no one took much notice of Sankar Raman’s letters—until 3 September that year, when he was found murdered on the premises of the Varadarajaperumal temple that he was in charge of.

The murder itself would have been little more than a crime statistic, but for an investigative piece that appeared in Tamil weekly Nakkeeran that suggested a conspiracy and pointed fingers at the revered Shankaracharya himself. The police, who latched onto the case quickly, got into the act backed by Tamil Nadu Chief Minister J Jayalalithaa and arrested Jayendra Saraswathi, his brother Raghu, the junior Swami Vijayendra Saraswathi, another manager called Sundaresan and several others with police records for allegedly eliminating Sankar Raman for having turned into a nuisance for administrators of the math (seat of a religious order).

Last week, a judge in the Union Territory of Puducherry acquitted the Shankaracharya and 23 others of the crime.The verdict has come as a huge embarrassment for Jayalalaithaa, who is CM again and whose government had ordered the arrest of Saraswathi in her earlier term. But before his saffron affiliates can rejoice, the key question remains: whodunnit?

The murdered manager’s family is unsatisfied with the judgment. His son, Anand Sarma, could only say: “We are disappointed with the verdict. We still do not know who killed my father.” Interestingly, his sister, who was paraded as one of the witnesses by the State prosecution, could not identify the accused. Sarma’s mother and he himself also issued contradictory statements.

The arrest of such a high-ranked religious leader had made the case one of India’s most sensational. For the faithful, Jayendra Saraswathi’s status is the highest that can be in an order of Hindu learning (though co-equal with other Shankaracharyas of other peeths). The seer was known to play tennis, travel overseas, mingle with untouchables, and keep company with a powerful elite. These habits are not in keeping with what is expected of a shankaracharya, and were questioned by Sankar Raman. According to the police chargesheet, the Shankaracharya and his close associates had paid about Rs 30 lakh to two criminal gangs to rid them of his existence–one was given a supari contract to kill Sankar Raman, and the other was asked to own up to the murder and surrender.

Before the case, Chief Minister Jayalalithaa had been closely associated with the peeth and was regularly seen at its rituals. Since she ordered the arrest, it came as a surprise to many, with much talk of political intrigue around the case. Saraswathi was picked up on Diwali from Mehboobnagar in Andhra Pradesh, and it led to popular protests all over India. For the AIADMK’s Jayalalithaa, it was an opportunity to signal her neutrality on matters religious. Till then, being a Dravidian party leader of Brahmin lineage, she was usually seen as someone soft on saffron politics, while the opposition DMK took pride in being secular. In fact, DMK chief M Karunanidhi is reported to have said in private that it was the first time he’d seen two Brahmins (the seer and the CM) fight it out.

That the pontiff was arrested was seen as a bold move by the AIADMK. After the Tsunami of 26 December 2004, the seer’s followers said that Tamil Nadu had been cursed by the ocean because the Shankaracharya had been hounded. It is another matter that most victims who met a watery grave were poor fisherfolk living along the coastline in thatched huts.

The case against Saraswathi turned creaky within a fortnight of the arrest, with a series of flip-flops in testimony. Kathiravan, one of the accused, turned hostile and retracted his confession, saying he had made it under duress. This man, who was killed in a 2013 gang war, has been acquitted too.

The case has not just attracted media commentary, it has been followed closely by many. S Gurumurthy, columnist and rightwing ideologue, wrote in The New Indian Express after the acquittal: ‘No debate on the Shankaracharya judgment will be complete without recalling the vicious and hurtful discourse against the Acharya and the math and how the ancient institution and its faithful underwent the assault and pain silently… the math and the Acharya were being hounded without basis and the case itself was groundless. The judicial verdict exonerating the Acharyas and the others charged with the crime implies that the entire case was misdirected.’

Based on what he calls his ‘counter-investigation’ of 2004, Gurumurthy says the two criminals on whom the police had exclusively relied to name the pontiff had in turn accused the police of being principal fabricators of false charges. According to him, the so-called secular media had also launched a campaign against Saraswathi to tarnish his image. He himself had an arrest warrant issued against him, he says, and had to appeal to the Judiciary, which passed orders restraining the state.

In Tamil Nadu, the police investigation was marred by what looked like underhand methods on their part to fix Kanchi’s godmen. The police used several rowdies with police records as witnesses (who were later to accuse the cops of forcibly obtaining statements on the seer’s role in the manager’s murder). In 2005, after Saraswathi obtained bail, the accused’s legal team/s petitioned the Supreme Court to shift the trial to a court outside Tamil Nadu on the argument that a prejudice-free process would not be possible within the state. In response, the apex court transferred the trial to a Puducherry court and also granted the petitioners their prayer that no Tamil Nadu prosecutor represent the State against the accused.

The trial itself was not without its share of drama. In 2011, the Madras High Court briefly stayed it on revelations that the seer allegedly tried to broker a deal with the judge then. Another judge was appointed and in the eight years that the court took to reach a conclusion, it examined 189 witnesses, of whom 81 turned hostile. At the end, this was the key reason that all 24 of the accused were acquitted.

In his judgment, the judge pointed out that there was no incriminating evidence against the accused and the motorcycle used for the crime had not been identified. Also, since witnesses had turned hostile, there was no substantive evidence to corroborate what they had said earlier. The judge also criticised the investigating officer for failing to conduct an independent probe and produce all the evidence collected. The court accepted the defence’s argument that some witnesses had made statements under threat.

After the court pronounced the verdict, Public Prosecutor N Davadoss told reporters that he would study the order before recommending a course of action, presumably an appeal to a higher court, for the government to take. Politically, the acquittal is not exactly good news for Jayalalithaa, who people remember ordered the arrest and defended it by arguing that it was based on strong proof.

Welcoming the judgment, Subramanian Swamy, a known Jaya-baiter who recently merged his Janata Party with the BJP, demanded an apology from the Tamil Nadu Chief Minister for the episode. “It is an insult to the Hindu religion,” he said, “If she does not apologise, she should be sued.” Adds Sri Sri Ravi Shankar of The Art of Living Foundation, “All the media houses that had maligned the Shankaracharya and Sanatan Dharma [‘eternal religion’] now owe them an apology.” While right-wingers across India have erupted in joy at the Shankaracharya’s acquittal, few seem bothered by the question of why Sankar Raman was killed on 3 September 2004 in the first place—and by who.