To capitalise on Telangana, the Congress might field Rahul Gandhi as its Lok Sabha candidate in his late grandmother’s southern constituency 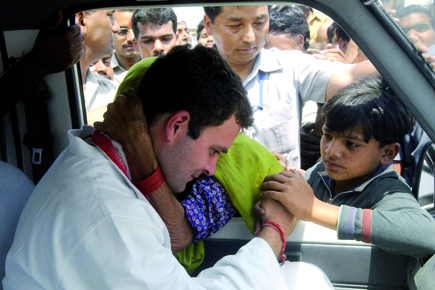 To capitalise on Telangana, the Congress might field Rahul Gandhi as its Lok Sabha candidate in his late grandmother’s southern constituency


The Congress, for all you know, is still busy making cold political calculations on how to make the most of Andhra Pradesh’s break-up. Surely, the party must be tempted to gerrymander the electoral map, given the shambles in which it finds itself here, a large state that gave it rock-solid numbers in the country’s last two Lok Sabha elections. Come 2014, salvaging even a part of that parliamentary support would be difficult for it.

Andhra Pradesh is buckling. But the Congress knows that a chaotic bifurcation of the state would be a calamity. A plan, therefore, is afoot to change the ground scenario in much the same manner the party did more than three decades ago in the aftermath of its worst ever crisis after Independence.

The plan focuses on the constituency of Medak in the proposed Telangana state. This is the Lok Sabha seat that heralded a new beginning for Indira Gandhi in 1980, three years after she was evicted from power by the Janata Party on an anti-Emergency wave. Again, preparations are on for it to play an important role for the Congress in national politics. This time, the effort underway is for her grandson Rahul Gandhi as he gears up to lead the party into a general election due in April-May next year.

Just as Indira Gandhi started her 1980 march to Delhi from two parliamentary constituencies, her traditional seat of Rae Bareli in the north and Medak in the south, so it seems Rahul Gandhi may contest the Lok Sabha polls from Amethi in Uttar Pradesh and Medak in Telangana. According to sources, all roadblocks have been cleared for the purpose and preparations have reached an advanced stage to declare Gandhi as Medak’s Congress candidate. “This is the reason that M Vijay Shanthi, the sitting MP from Medak, has been made to join the Congress,” says Jagdish Shetkar, the party’s MP from Zahirabad, another Lok Sabha constituency in Medak district (there are two). Shanthi is an actress-turned-politician who won the seat in the General Election of 2009 on a ticket of the Telangana Rashtra Samiti (TRS), which led the agitation for the region’s statehood. She has recently switched to the Congress.

By and large, Congress leaders do not acknowledge any such plan in public, but in private conversations they have no qualms admitting it. The idea of Rahul Gandhi opting for a second constituency apart from Amethi for 2014 has been in the air for several weeks now. It was first mentioned by YSR Congress leader Dr MV Mysoora Reddy in August, when he charged Congress President Sonia Gandhi with trying to split Andhra Pradesh as a ploy to brighten her son’s prospects in Telangana. Later, the Telugu Desam Party (TDP) also levelled similar allegations against the Congress chief. All through, leaders of the grand old party have kept silent on the issue but moved bit by bit to get Medak ready for Rahul Gandhi.

In 1980, his grandmother had won hands down in Medak. At the time, Andhra Pradesh was a southern bastion the Congress could count on. In the 1977 polls, when the party was routed in most parts of the country, it won 41 of the state’s 42 seats; the only seat it lost was that of Nandiyal, which elected Janata Party candidate Neelam Sanjeeva Reddy.

Indira Gandhi’s 1980 comeback after the failed Janata experiment had been with a thumping majority. She regained Rae Bareli—which she lost in 1977—by a wide margin too. But since one person can hold only one seat, she gave up that seat in the north and opted to represent Medak for the rest of her life, showering largesse and attention on a scale that made it a household name in India. Her assassination in 1984 left the entire district feeling politically orphaned.

“The district still cherishes the Indira years,” according to Shetkar, a third-generation Congress leader of the area, “It was a golden period—almost 100 per cent electrification was achieved and several big industries were set up in Medak [in her time].” It was because of the Indira stamp on the district that in November 2010, the then Chief Minister of Andhra Pradesh K Rosaiah announced that his government would rename Medak after the former Prime Minister. However, he could not go ahead with the proposal as his regime ended abruptly.

Once upon a time, Medak was known as ‘Metuku’ (a morsel of food in Telugu) because it had abundant paddy to supply other often-drought-hit parts of the region with rice. Of late, it has been a nerve-centre of the movement to carve out of Andhra Pradesh a separate state of Telangana.

Located 60 km north of Hyderabad city, Medak shares boundaries with the districts of Warangal, Nalgonda, Hyderabad and Nizamabad. As a parliamentary constituency, Medak contains seven Assembly segments: Siddipet, Medak, Narsapur, Sangareddy, Patancheruvu, Dubbaka and Gajwel. Of these, Siddipet plays the largest role in determining the fate of Medak’s Lok Sabha candidate, since this segment has an unusually large number of voters. In fact, in 2009, it was because of the near-total support of Siddipet—the home turf of TRS chief K Chandrasekar Rao—that Shanthi scraped a victory despite performing poorly in the other six segments.

The current Assembly representative of Siddipet is Harish Rao, son-in-law of the TRS chief. Of the other six segments, the MLA of Medak belongs to the TDP, while those from Narsapur, Sangareddy, Patancheruvu, Dubbaka and Gajwel are of the Congress. “Siddipet is the only segment in the Medak constituency that is yet to be neutralised by the party,” says Muthiyam Reddy, the Congress MLA who represents Dubbaka.

According to Reddy, if Rahul Gandhi changes his mind and lets Shanthi contest the Medak Lok Sabha seat again, she will fail to retain it this time simply because she is now with the Congress and Siddipet remains loyal to the TRS. These two parties have held merger talks but nothing has come of it so far. “Last time round, Siddipet went one-sided and she won by nearly 6,000 votes,” he says, “Even if Telangana is formed before the next election, and if the TRS-Congress merger does not take place, she may just not be able to make it because Siddipet would opt for the TRS candidate.”

In a way, that remains a key challenge for Rahul Gandhi too. Despite the fact that Medak has had a bond of sorts with the Gandhi-Nehru family, much would depend on the UPA Government’s ability to deliver on its promise of Andhra bifurcation and related benefits. For that, it must settle some issues on the ground, issues that are getting more complicated by the day.

In picking Medak as a seat for Rahul Gandhi, the Congress expects to elicit popular sympathy and claim sole credit for fulfilling the long-cherished statehood dream of the people of Telangana. However, this is bound to alienate the TRS, which considers Medak its backyard; there is speculation that K Chandrasekhar Rao is also thinking of contesting next year’s polls from his native district.

Yet, it is not a challenge that Rahul Gandhi has no hope of overcoming. One politician who can be instrumental in persuading the TRS chief to step aside for him is K Keshav Rao, the veteran Congress leader who has recently joined the TRS along with two other party MPs. Though Keshav Rao is a general secretary of the TRS and a key aide of the party’s chief, he is believed to be a Congressman at heart. Sources in the TRS say that Keshav Rao and other Congress leaders of the Telangana region who had shifted to the TRS could help sort out an impasse over Medak in case the two parties fail to merge.

On his part, Keshav Rao is reluctant to comment on an issue he calls ‘hypothetical’ because the Congress is yet to declare its Medak candidate. He, however, welcomes the idea of Gandhi taking up the new state’s ‘cause’. “Telangana as such is loyal to the Gandhi family,” he says, “This is particularly so in case of Sonia Gandhi, the first person of the family who has come out openly in favour of a separate state of Telangana.” Of the Congress heir apparent, he says, “Everybody here is charmed by the idea of Rahul Gandhi contesting from Telangana. There can be no better situation than Rahul Gandhi… playing a role in sorting out differences between the TRS and the Congress.” On the two parties’ possible merger, this is what he has to say: “We are prepared to merge with the Congress if the demand of the people of Telangana for a separate state with full powers in all of its ten districts is fulfilled by the Government.”

The formation of Telangana seems certain, but whether the merger will happen is still a common talking point in Hyderabad. All kinds of arguments, both for and against it, are being put forth. On one issue, however, there is consensus within the political class as well as among voters at large: the question of what is holding back the creation of Telangana. The Congress is seen to be delaying it to grant sufficient time for two things: first, for agitators asking for a united Andhra to burn out with fatigue; and second, for the party unit in the state—be it Chief Minister Kiran Kumar Reddy or other politicians—to come to terms with the Centre’s decision. In addition, observers feel that the Congress leadership wants to time it in such a manner that it comes to Parliament only in the last session of its current term (the vote-on-account session in February-March 2014), and not in the winter session of 2013.

That way, the Congress could maximise its advantage in Telangana as election season kicks in. The new state would have 17 Lok Sabha seats that an alliance with the TRS could easily deliver to India’s ruling coalition. It seems likely, however, that the Congress will be wiped out in Seemandhra, the state’s other part with 25 seats.

The party’s odds of success could rise if Rahul Gandhi were to contest the Medak seat. The move would also gel well with the Congress vice-president’s efforts to emerge as the voice of Dalits and Tribals; Scheduled Castes and Tribes make up almost a third of the population of the Telangana region.

It could also prove to be an effective way to portray Rahul Gandhi as a leader of the south as well as north. This would place him in contrast with the BJP’s Narendra Modi, who does not appear to have the courage to test his popularity south of the Vindhyas.