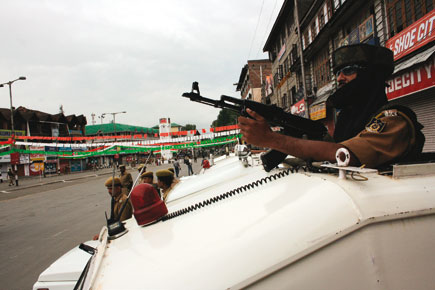 
The Central Government-appointed interlocutors on Kashmir are trying hard to prove that they are delivering on various accounts. One such issue they want to take credit for is the Home Ministry’s recent announcement of the reduction of 10,000 troops in Jammu & Kashmir. In a recent seminar at Delhi’s Jamia Millia Islamia University, Home Secretary GK Pillai had said that there will be a 25 per cent reduction in security forces, especially in well populated areas, and that more bunkers will be dismantled in Srinagar. But now who takes a final decision on the force reduction has run into quite a controversy in itself.

At the same seminar, one of the interlocutors, while replying to a question about the Army’s reservations over troop reduction, had reportedly said that when it came to reduction of paramilitary personnel, it was the Home Ministry which would have the final say. But a day later, a senior Army commander said that there was a need to take a holistic view on withdrawal of troops from Kashmir, and that it would have to be decided by the Unified Headquarters based in the Kashmir Valley. “The decision of reducing troops in the state lies with the Unified Headquarters, which is headed by the Chief Minister. It is the highest security assessing panel in the state,” GoC 9 Corps Lieutenant General AK Chaudhary told the press.

In the backdrop of Pillai’s announcement, Army Chief General VK Singh also visited J&K and met officers at the Udhampur-based Northern Command, which looks after operations in the state. Just a few days ago, on 22 January, Defence Minister AK Antony had said that his ministry had received no proposal for troop reduction and that any such step would have to be carried out in consultation with the Army. With Pillai now making it official, the question is: who will take the final decision? And will the interlocutors be able to get the credit they want?