The Irony of a Name

Review website Mouthshut.com’s battle against being muzzled could strike a blow against online censorship 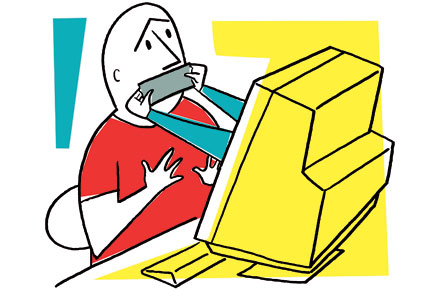 Review website Mouthshut.com’s battle against being muzzled could strike a blow against online censorship


In May, the Mumbai headquarters of Mouthshut.com—a popular review website where consumers put up their opinions and experiences of products and services—was paid a visit by two sub-inspectors of the Chennai Police’s Cybercrime Cell. The policemen told Mouthshut’s CEO Faisal Farooqui that one Kaar Technologies had filed a complaint that reviews of the company posted on the website were defamatory. In response, Farooqui gave them a demonstration of how the website works and explained that he had no role in these reviews: all his site did was host them. The policemen took his statement and left.

The reviews under dispute described Kaar’s work culture and hiring practices as being adverse to job applicants. At first, the company had sent Mouthshut an email asking it to remove them. The website declined. It was after this that Kaar filed its complaint. The reviews, however, are still there. “We have not taken down the positive [or] negative reviews about Kaar Technologies,” says Farooqui.

This was not Mouthshut’s first such experience. Common sense dictates that people saying good or bad things based on their experience of a product or service is hardly a matter for the police to look into. The website is just a platform for the exchange of views, but the strange part is that Mouthshut might eventually have no choice but to remove the reviews in compliance with the prevailing law. Under the IT Rules of 2011, a provision called ‘intermediary liability’ holds website owners legally responsible for content on their website. Thus, YouTube is responsible for knocking off pirated movie clips and Facebook for deleting status updates that are defamatory or communally inflammatory. The same rules place Mouthshut in a tight spot.

Offline, intermediary liability does not apply so strictly. A mobile network owner isn’t held responsible if two of its users plan a terror attack in a conversation on its mobile network, and a car maker is not accountable for drunken driving. Online, however, it’s a different story. India’s infotech law, like most such laws across the world, holds websites responsible for offensive content.

No one knows how many comments on how many websites have been taken down. But Mishi Chaudhary, an infotech lawyer who is executive director of a civil liberties group called Software Freedom Law Centre India, is trying to make an estimate. Chaudhary recently organised a series of roundtable discussions with individual web-business owners in Delhi, Kochi, Mumbai and Bangalore. “Many small web hosting business owners came to us in Kochi with these problems,” she says, “Because of the IT Rules, anybody [can write] to them saying, ‘Remove this from your website because it is offensive to me.’ They’ve sometimes got police visits and been asked for information [on people] posting.” Chaudhary is putting all this feedback together and plans to present it to Law Minister Kapil Sibal this October.

Just this April, Mouthshut suffered a legal setback when the Bombay High Court ruled in favour of Sharda University against some user reviews critical of it. The court directed Mouthshut to delete the reviews. According to its order, the website had been ‘publishing [and] transmitting information which is private and confidential in electronic form…’. It also gave the plaintiff the option of suing Mouthshut’s CEO in order to punish him with ‘imprisonment… for a term which may extend to three years and with fine which may extend to five lakh rupees…’

In a 2010 case, Mouthshut was sued by Doctor Health Clinic, a provider of homeopathic skin-and hair-care services in Bangalore. The clinic objected to user reviews that said that the clinic, contrary to its claims, could not stop hair-fall. Some reviews also advised balding people that they were better off not going to the clinic. Said the takedown notice that Mouthshut got from the clinic’s lawyer: ‘The above comments have caused grievous injury to the name, fame, standing and reputation of my clients. The freedom of expression of these… members on your website cannot come without accountability.’ The website refused to take the reviews down, resulting in a civil court case in Bangalore that began last December. The court has not only ruled against Mouthshut, but also banned it from publishing reviews of the clinic in the future—whether fair or not.

In another case, Pune-based Kumar Builders sent a legal notice to Mouthshut on user reviews that complained about the quality of its work and after-sales service. Said the notice: ‘You are displaying derogatory and defamatory contents in respect of the said projects/promoters on your website Mouthshut.com… without verifying the truthfulness, correctness and authenticity of the contents…’ The website told the builder that although the accuracy of the comments was unverified, this was not a valid reason to expunge them. The builder took it to court, asking for Rs 2,000 crore in damages. The case is not over yet.

While freedom of speech is a principle enshrined in the Indian Constitution, the police and courts go by a specific law in cases of internet views. This is Section 66A of the IT Act, an infamous insertion made by the Government in 2009 that prescribes a jail term of three years and a fine for anyone who sends by means of a computer ‘any information that is grossly offensive or has menacing character…’ The amended law is ambiguous on what may be deemed ‘grossly offensive’. Potentially, any negative comment can be held offensive and hence illegal. And, as per the IT Rules 2011, it is the intermediary liability of the website owner to remove ‘offensive comments’, failing which it could face legal prosecution.

In 2011, to demonstrate how these rules could be used to muzzle inconvenient opinions, the Centre for Internet Security (CIS) conducted a sort of sting operation. The Bangalore-based NGO sent emails to seven websites objecting to one comment per site. Six of the seven websites took them down without any hesitation, even though the CIS’s objections were plainly frivolous. For example, it red-flagged a comment posted under an article on the Telangana movement published on a news-site that called the movement’s leaders ‘selfish, shortsighted and having no vision and mission’. The CIS complained that this was a ‘racially and ethnically objectionable’ comment under the IT Rules. It was removed without any protest. Within 72 hours, the news website had taken down all comments posted under that article.

Fed up with legal notices, Farooqui has struck at the law itself. Earlier this year, he decided to challenge the Intermediary Guidelines of the IT Rules, 2011, in the Supreme Court. In his petition, Farooqui argues that these curtail free speech and are therefore un- constitutional. In May, India’s apex court accepted his case for hearing.

This is a litigation that is clearly in public interest, but for Farooqui, who has hired the renowned lawyer Harish Salve to fight the case, it is a matter of business sustainability. His website draws its traffic mostly for all the reliable feedback of fellow consumers that it hosts, and this relies on free speech. “Consumers write a review as a last resort after they have called up your call centre, your manager, and didn’t get a response,” says the CEO, “Now they want to vent.”

The website has 4.1 million registered users who bitch, praise and gush about more than 500,000 products and services available in India. The company claims it gets 80 lakh page views every month (1). “In a month, we get about 100 requests to remove something,” says Farooqui, “Probably two or three translate to actual removal.”

A 36-year-old with traces of an American accent and a degree in Finance and Information Systems from New York State, Farooqui started Mouthshut.com in 2000, the millennial year that spawned thousands of dotcoms and dotgones.

In college, he had served as technology editor of the campus paper. Though he was studying business, he had also enrolled in an elective module on magazine writing. “The whole class was about writing four articles for a semester and getting the articles peer-reviewed,” he recounts, “I got 20 [notes of] feedback from my classmates. I was supposed to modify the article. The modified article was substantially different. One of them got published in a magazine. For me that was transformational—it made me think that if a simple article could be [so thoroughly] transformed, imagine what feedback could do to products and services… I started looking at business models.”

It was the time of the dotcom boom, with Amazon.com having famously empowered readers by letting them post book reviews on its website. These reviews, frank and impartial and thus credible, had driven up the website’s traffic and boosted sales. “I said, ‘How about reviews for everything—pencils and paper, airline seats, the restaurant you went to last night?’”

Farooqui worked a job for a year in the US and then returned to India to launch Mouthshut.

The battle against being muzzled online is being fought elsewhere in the world too. In America, where free speech is held in special esteem, companies are using creative ways to get adverse reviews taken off websites. But they don’t always succeed. In 2011, a New Yorker called Robert Lee complained on Yelp.com of being charged $5,000 for a dental procedure that should have cost only a few hundred dollars. The dentist in question threatened to sue him and sent Yelp takedown notices arguing that Lee’s comments were under the dentist’s copyright. But Lee, sure of having been wronged, sued the dentist and the case got so much media attention that the dentist’s legal team backed down.

There is reason to believe that takedown notices are on an uptrend in India. Every year, Google discloses how many such notices it gets from each country. The number from India is going up. In July-December 2012, Google India got 38 court orders to take down 413 items. And these are just the lot from corporations and individuals. It also gets such notices from the Government, which tries to play internet censor this way.

Of course, how touchy people get depends on the kind of thing under scrutiny. Food reviews have so far been safe. Deepinder Goyal, CEO of Zomato, a website where users can upload reviews of restaurants, says he is yet to be affected. “We are a food portal and we don’t run into such instances. People only write about restaurants and food, and it rarely gets controversial to an extent where it could hurt someone in an ‘offensive’ way. The only companies I know that get affected by this are Google, Facebook and Mouthshut.”

But rules are rules, and they put every online opinion at risk of legal censorship. And this means that Indians are not as free as they assume.

Note: This article was modified after it was published