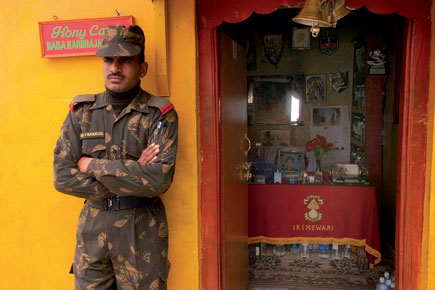 
The information came to me from my editor at The Indian Express in Chandigarh. A local cop had tipped him off, but even so, the story seemed difficult to believe. Since I had nothing more pressing scheduled for the day, I set off for Kuka village in the neighbouring Kapurthala district.

It was barely 25 km from Jalandhar, an hour’s ride on my motorcycle. This was 14 years ago, but even today I can recall many of the details of that journey. There was very little traffic once we (the photographer was riding pillion with me) got off the main road. It was the end of October, the air had a slight chill and the paddy stood ready for harvest in the fields.

At the village, finding the Baba’s house was easy. Everyone seemed to know where he lived. The house lay on a narrow earthen street off the main village road, made of brick and concrete surrounded by high walls. I rang the bell and a grey-haired woman in a patterned salwar kameez opened the enormous metal gate. When we introduced ourselves she ushered us in.

She said she was the Baba’s sister-in-law, “My husband is away for the day. Only my mother-in-law is around but she is in bed, her knees give her a lot of trouble and she can barely see.” Not that it mattered, she seemed to suggest, visitors were always dropping in unannounced at any time of the day “especially when he is here on leave”.

She led us straight to his room. I found myself treading softly despite myself. There was a photograph of the Baba in one corner, broad of shoulder in his olive green Army uniform. With barely the trace of a beard, he looked younger than I had expected. On the bed, a new uniform had been laid out. His shoes and slippers lay at the foot of the bed along with a pair of snowshoes. “They are quite worn out,” she said, “the men who accompanied him have promised to bring a new pair next year.” That year, like every other year, a berth on a train had been reserved in the Baba’s name and two soldiers had accompanied him on the journey back from the Sikkim border. They had travelled with him to Jalandhar, where an Army vehicle was waiting for his arrival. It was adorned with four nishan sahibs, the flag that marks any Sikh religious shrine.

He arrived on 16 September, like any other year, and stayed overnight at the Army gurdwara with his regiment that happened to be posted at the Jalandhar Cantonment for the year. The next day, he was driven home in the vehicle that had picked him up from the train station. Mid-November, she told me, the same vehicle would take him back to join duty in the distant mountains.

The absurdity of our conversation grew on me as we kept talking. We were speaking of a man who had been dead for nearly 30 years. The Baba had joined the Punjab Regiment on 9 February 1966. He became part of the 23 Punjab Regiment when it was raised in October the same year. Its first field posting was in the mountains on the Sikkim border with China. On 4 October 1968, while escorting a mule column, he slipped and fell into a nullah. He was the first casualty of the regiment.

Shortly after his death, Sepoy Harbhajan Singh appeared to a colleague in a dream and asked that a samadhi be constructed in his memory. Soldiers who patrolled the mountainous border with its icy crevasses and sudden avalanches started seeing him in their dreams. His predictions of the dangers that awaited them, or so the story goes, as well as his warnings about Chinese intrusions in the area proved correct over and over again.

The belief grew that the spirit of Baba Harbhajan, as he was now being called, was still patrolling the border. The Army started treating him as he were alive. It helped morale in an area where troops had to patrol the snowbound border at heights above 4,000 metres. Over the years, like any serving soldier, he was assigned living quarters, clothing, given annual leave and awarded promotions.

The samadhi today is a shrine that attracts devotees from Sikkim and Bengal. In 1987, a memorial was constructed in his name, and a Baba Harbhajan Singh mandir followed soon after.

Initially, back in the village, his family had little knowledge of what was unfolding in Sikkim, “My husband told me that it was only in 1975 that a soldier from a nearby village came looking for Baba. That’s when we first came to know that he was supposed to be back in the village, staying with us. And then in 1985 an Army vehicle started dropping him home.”

Her husband had visited Sikkim with her mother-in-law just six months before my visit. They returned to tell her that “he has been promoted to the rank of Captain. There is even a stretch of the border that he patrols on his own. It is the most difficult part of the terrain and he has promised that the troops will have a 72-hour warning before any untoward happening.” She saw the look of incredulity on my face, and said, “Check for yourself with the Army, when he goes on leave, additional troops have to be deployed that are pulled back when he returns in November. Even the Chinese set aside a chair for him whenever border meetings are held.”

I called up the commanding office of the Baba’s regiment. He confirmed the story.

I wrote the story for The Indian Express much as I have described it here. Soon after it was published, the Tarksheel (Rationalist) Society in Punjab launched a campaign against the Army for spreading superstition. Despite my sympathies for anyone quixotic enough to try and spread rationality in India, I was astounded at their shortsightedness. It seemed to me, as it still does, that superstition is not a term that applies to the transformation of an ordinary young man into a deity, or to the faith that sustains such a phenomenon. Something deeper lay at the very source of this story.

At first, I thought its origins lay in the Sikh tradition of martyrdom, invoked by the devout in the Ardaas, an essential part of the daily prayer. But that tradition focuses on men who have died defending the faith, an accidental death such as Baba Harbhajan’s does not merit the reverence that has come his way.

I laid the story aside for some years, and then while consulting A Glossary of the Tribes and Castes of the Punjab and North-West Frontier, by the turn of the 19th century ICS officer Horace Arthur Rose, for quite another reason, I came across this entry: ‘When a new colony or village is founded in the south-east Punjab, the first thing to be done before houses are actually built is to raise a mound of earth on a spot near the proposed village and plant a jand tree on it. Houses are then built. The first man who dies in the village, whether he be a Brahman, a Jat or a Chamar, is burnt or buried on this mound, and on it is built a masonry shrine which is named after him. The fortunate man is deified as the Bhumia or earth-god, and worshipped by Hindus of all classes in the village, being looked upon as its sole guardian deity.’

Reading these words, I recalled that the 23 Punjab Regiment had been raised the same year Harbhajan Singh had died, and he was the first of its recruits to die. In Sikkim, far from their villages in Punjab and Haryana, the new recruits had recalled an old custom. Baba Harbhajan Singh was their Bhumia. Five years later, the regiment fought the battle of Longewala, portrayed in the Hindi film Border. Unsurprisingly, they credited the victory to their Baba.