The drug lady of Mumbai

Baby Patankar, who introduced Meow Meow to the city and was arrested on 22 April, is said to be worth over Rs 100 crore 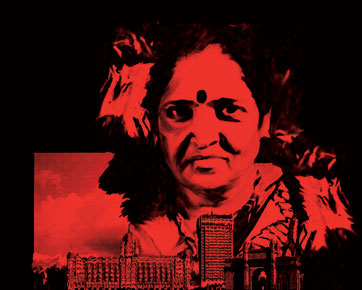 Mumbai’s Siddharth Nagar slum, located in Worli, sprawls over a hillock, a place of approximations where people who live in its squalor can look up and see luxury high-rises where flats cost tens of crores. Besides those who live here, few outsiders venture into its serpentine bylanes. Siddharth Nagar has been infamous as a hub for drug trafficking, and the person who lords over this maze of shanties is a 54-year-old woman, Shashikala Ramesh Patankar, aka Baby Patankar. Arrested by the Crime Branch of the Mumbai Police on 22 April along with her son Girish and a minor niece near Panvel on the Mumbai-Pune expressway, she was reputedly in control of the city’s market for Meow Meow—as mephedrone is popularly called.

Baby Patankar is said to be the one who launched this drug in Mumbai as an illegal recreational option backed by a supply chain. She has been in the business of drugs for 30 years now, and has survived on the clout of her connections with police and Customs officers, apart from politicians. According to the police, of every 10 drug addicts in Mumbai, eight are on Meow Meow, and all of it can be traced to her network.

However, Patankar and her two sons, Girish and Satish, have been absconding since March, after the police arrested her paramour, Dharmaraj Kalokhe, in a raid that also led to the seizure of 122 kg of Meow Meow, found stored at his residence in Satara. Kalokhe was a senior police constable with the Intelligence wing of the Crime Branch; he had been in a relationship with Patankar for 15 years, almost since he was first posted at Worli Police Station in 1996. He became her business partner to help keep Mumbai, Maharashtra, Goa, Gujarat and Delhi supplied with Meow Meow. Police sources say that it was Patankar who snitched on Kalokhe—because he had started storing large quantities of the drug on the sly and pocketing the profits.

Patankar’s arrest, a surprise to many, took quite an effort. A team of 100 policemen was sent crisscrossing the state and country looking for her. They went as far as Surat, Agra and Delhi before she was caught. Says Deepak Humbare, deputy superintendent of police posted at Satara. “I am here with a team, as we also want custody of her.”

Most of Siddharth Nagar’s houses have tin sheets as roofs, but Patankar’s is a plush four-room pucca house. With every household in the area more or less under her thumb, she was running operations with a network of female drug peddlers. “They carry it in their clothes and start dis- robing and accusing us of molestation if we try to stop them,” says a policeman, “And female cops are not too eager to enter the slum… so the trade goes on.”

Siddharth Nagar is not a friendly place. A new face is instantly noted and word spreads quickly. I had visited the slum as a census worker, and many were surprised because they couldn’t remember any such exercise ever being done there.

The trek to Patankar’s house, atop the central hill, involves getting past winding alleys, unfriendly stares, wolf whistles (used as signals) and lewd remarks made from behind closed doors. The reluctance of policewomen to venture here is understandable; the hostility to outsiders, palpable. No one helps with directions, not even when you want to exit the maze. The slumdwellers are beholden to Patankar, after all. She has helped many of them with prompt cash, police cases (even in other parts of the city) and much else.Her influence with local politicians has also helped them get water and power connections, a ration shop in the locality and legal status for their houses.

I find her house shut. It was abandoned after a police raid that netted only an odd 20 gm of Meow Meow.

Baby Patankar settled in Siddharth Nagar after marrying Ramesh Patankar. Called ‘Baby’ by her maternal family, the name stuck. Her brothers too moved to the slum. Police say she was ambitious right from the beginning. She soon became a part of the family’s milk selling business, but its earnings were too meagre for her. Her first step into crime seems to have been a milk adulteration racket. “Her husband and her brother were drug addicts,” says a police source. “She started getting drugs for them from small peddlers. Her earnings went into it. This was probably her first introduction to the world of drug peddling. The adulterated milk business made her rich.”

As her husband’s drug addiction grew, she took charge of the house and threw him and his family out. Shortly after that, she quit the milk business. Her foray into drug peddling began in the mid-80s, selling hashish and brown sugar, but in small quantities. “She kept off the police radar but managed to build a network with peddlers and addicts. That’s how drugs came to Siddharth Nagar,” says the source. “Soon, she decided to expand the business and started selling larger quantities of other banned drugs. She came under the eye of the underworld and established gangs started beating up her peddlers. That’s probably the reason she became a police informer.”

Kalokhe, who joined the police force in 1987, first met Patankar in 1996 when he went to raid her house. As usual, the cops found no evidence of drugs, but he had something new going for him. Posted in Worli, he helped her gain access to other cops across the city’s police stations. Sources say that she always went after the lower rung policemen because she found them easier to cultivate. As her business grew, she bought SUVs and two-wheelers under the guise of running a travel agency, but used these to ferry drugs across Maharashtra, Goa and Gujarat.

The police say Meow Meow elevated Patankar to the big league, and what aided her rise, ironically, was the decline of the Mumbai underworld. With most big gangsters in jail or in hiding, Patankar became a sought-after pointsperson for foreign drug lords who wanted access to the city’s market. When it became increasingly difficult to get large quantities of hashish, heroin, LSD or Ecstasy, she turned to Meow Meow. Such was her initiative that she soon had a monopoly on the procuring, stocking and distribution of this synthetic drug, which was cheaper than the others and winning newer and newer addicts by the day.

The Worli Police Station is close to the slum, and she has been arrested only once before in her 30-odd-year career. That was back in 2001—for selling marijuana. She was granted bail and later acquitted on lack of evidence. After that, she had a free run. Every time there was an order for action against her, Patankar would get a tip-off from someone in the police and she’d either flee or get anticipatory bail.

A policeman who was part of the last raid and does not want to be identified has this tale to recount: “We reached her house and entered it. She slipped out from another door and ran. When she was cornered, she started taking off her clothes and screaming loudly that she was being molested. There was no policewoman with us. We ran away as fast as we could because we could have been attacked by the slumdwellers.”

Patankar was useful as a police informer. In 2011, she helped bust a drug trafficking racket that led to the arrest of Ashok Dhawale, an assistant commissioner of Police, with 2 kg of brown sugar concealed in his official vehicle. She is also said to have trapped for them drug peddlers from Rajasthan, Nimach, Ratlam and Bhawani Mandi in Madhya Pradesh by either posing as a decoy customer or supplying them with information of a deal.

As part of their pressure tactics to nab Patankar, the police had arrested her daughter-in-law Sarika and nephew Upendra Majgaonkar. Another nephew, Manish Majgaonkar, a lawyer, was helping the Mumbai Police because he holds her responsible for his mother’s 1993 murder; speaking to me, he claims that he had recorded his complaint at Dadar Police Station to reopen the murder case. “I saw her kill my mother,” says Manish, “She used our house in Worli Koliwada to store drugs and killed my mother when she objected. She is a dangerous woman. The police had registered a case of abetment to suicide and dowry harassment against my father. He has been absconding since. But no case was registered against Baby.” Her estranged mother-in-law has faced three rounds of questioning by the police, who suspect that the old woman is also part of Patankar’s drug network.

The police estimate Patankar’s net worth at over Rs 100 crore and say she has invested her fortune in real estate. She owns 10 rooms in Siddharth Nagar, several flats in Mumbai and Pune, and a farmhouse in Lonavala, according to the police. Her bank accounts, which have been sealed, were found to have Rs 40 lakh in them, reveals a source. The rest of it will presumably be deployed in an effort to keep her out of prison.