The brigand who wanted to be Veerappan

The rise and capture of the poacher who was threatening to step into the late bandit’s shoes. 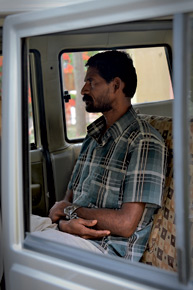 The rise and capture of the poacher who was threatening to step into the late bandit’s shoes.

In the late 1990s and early 2000s, the governments of Karnataka and Tamil Nadu looked helpless before Veerappan as he kidnapped, extorted, smuggled sandalwood and ivory, poached elephants in huge numbers and attacked and killed policemen and forest department officials. What set Veerappan apart was his total disregard of the law. If policemen were sent after him, he would go after them.

In 1991, Veerappan was yet to attain mythical status, when Indian Forest Service officer P Srinivas tried to get him to surrender. Srinivas was asked to meet Veerappan alone; and venturing out on foot, Srinivas was abducted, tortured and beheaded. Today, in every forest office in southern Karnataka there is a framed photograph of him. It would take another 13 years for Veerappan to be killed, years in which his infamy spread all over India.

Saravanan Padayachi Gounder comes from the same community as Veerappan. He doesn’t have a handlebar moustache; but Saravanan is said to love alcohol, guns and women in equal measure, making it unsurprising that the local media began to call him ‘Veerappan 2.0’.

That stray note of amusement aside, Saravanan’s name also evokes fear among Forest Department employees and locals living on the forest fringes. They perceive him as similar to what Veerappan was in the beginning. Though Saravanan operates in a smaller area, with his exploits nowhere near the scale of the late forest brigand’s, once in a while, he offers a hint of what he can do. ON 28 MAY this year, Saravanan entered the Male Mahadeshwara Hills Wildlife Sanctuary from the Tamil Nadu side. He was accompanied by 20-odd armed men and a dozen trained hunting dogs. A source tipped off Karnataka Forest Department officials, and they moved to capture the poachers.

Vasudeva Murthy, assistant conservator of Forests, was in the forest party that night, and remembers the event clearly. They saw the gang, weaving up a hill, their flashlights jumping up and down. Suddenly, they changed direction and walked directly towards the foresters, surprising them. Later, it came to be known that the gang had run into an elephant herd and had decided to move away. “We warned them to surrender but they started shooting at us. I shot at them at quite a close range and saw one or two men fall down. But we were outnumbered and had to retreat,” says Murthy.

This was the kind of boldness that Veerappan used to exhibit. The same night, Saravanan decided to attack a check-post on the state border deep inside the Palar range. The staff manning it ran away on seeing the gang, which then set the check-post on fire. For over two hours, the guards who were hiding could hear Saravanan loudly shouting for them to arrest him if they were “real men”.

This incident was enough for the Karnataka Forest Department to start taking emergency measures. “We formed a special team to nab him and his gang members. A massive combing operation was started,” says Javed Mumtaz, deputy conservator of Forests of MM Hills Wildlife Sanctuary. When they heard that Saravanan was trying to sell a pair of tusks, they sent decoys; but it turned out Saravanan had sent only one tusk and was trying to negotiate a better price for the pair. “Eventually, we managed to arrest two gang members. Clues given by them also led to the arrest of another poacher, Ganesh. Saravanan himself was nearly caught on three occasions,” says Mumtaz.

Murthy says they knew there was no point to catching gang members—they were clear that they wanted Saravanan himself. “This would deter others from venturing into the forest,” says Murthy.

Last week, Saravanan surrendered to the Tamil Nadu Police, claiming that Karnataka Forest Department officials were planning to kill him in a staged encounter. Even in this, he is employing Veerappan’s strategy of playing the police of two states against each other. The Karnataka foresters have been given his custody, but cannot harm him now.

Saravanan grew up in Oonjikarai, a small village at the border between Tamil Nadu and Karnataka, a few hundred metres off the Mettur-MM Hills highway at Govindapadi. It is a hilly area with breath-taking views of valleys in between—a tiger spot and a migratory route for elephants as well.

Saravanan, who is said to be between 35 and 38 years old, knows every detail of the topography. It is said he was brought up on stories of Veerappan, seen as a Robin Hood of sorts in this region. Forest officials say in demeanour, swagger and even facial expressions, Saravanan apes him. Both belong to the Padayachi Gounder community. They are both expert huntsmen and trackers by profession.

Saravanan dropped out of school early, acquiring his first gun while still young. Later, he graduated to hunting wild boar and deer, but was never involved with Veerappan, probably because of the presence of the large number of policemen in the region at the time.

After Veerappan’s death, the joint Special Task Force was disbanded and there again was a spurt in poaching and wood smuggling cases with several new gangs beginning operations. This was when Saravanan started supplying arms and ammunition to them.

Stories about him begin from this time; among them, that he would stock guns in several houses, including of a woman— Shivamma—whom he visited near MM Hills. When her husband became suspicious of the affair, he took the gun away; and when Saravanan visited next and found his gun missing, he is said to have chopped her hand off.

Even politicians allegedly courted him to settle scores. Police say that once, when a local leader offered Rs 1 lakh to have a rival’s girlfriend killed, Saravanan offered to do the job for Rs 20,000. The story goes that he was arrested after shooting her down; but a local police official says there was no such case against him in Tamil Nadu. In a videotaped confession made to Karnataka forest officials, however, the bandit allegedly confessed to the murder.

Saravanan’s mother, Madhamma, is a tall, angular woman who claims her son is innocent when we speak with her in his village of Oonjikarai. “He has never been arrested by police or forest officials before. We do not know why he has been arrested now. Please talk to my husband,” she says. She adds that her son has never killed any elephants either, saying, “Why should we? We live close to the forest and protect it. My elder son has been employed as a forest watcher in Tamil Nadu. Why should we be doing something that hurts our own interests?”

Vasudeva Murthy says it is natural for people to protect him. “All lower staff who work in police and Forest departments are involved… Otherwise, how come there is never any real time information?”

Some months ago, Saravanan killed an elephant for its tusks. When he returned, Tribals from Talawadi village approached him in a group, saying that forest officials would arrest them for what he did. “He threatened all of us to keep quiet or face the same fate as the elephant,” says Chikapi, a cattle grazing tribal.

Based on his interrogation, the Forest Department is now trying to arrest his gang, while searching for three pairs of tusks. “We know [they are] for sale in the wildlife market. Once [they are] found, our case against Saravanan will strengthen,” says G Hanumanthaiah, a range forest officer in charge of the team. But, it is going to be difficult to convict him. Saravanan claims that it was a namesake who set the check-post on fire.

During a recess at the Kollegal court complex where Saravanan, dressed in a lungi and shirt, was produced, we try to speak to him. “Yenna Saravanan, yuvango sollrudu ella unmaya?” (“Tell us, Saravanan, is it true, what you are accused of?”) we shout as he is being taken away. The wiry man turns with a beatific smile on hearing a Tamil phrase in a largely Kannada-speaking compound. He looks skywards, both palms also pointing upwards.

Officials later claim that Saravanan had given valuable leads during questioning. “It will keep him busy in jail well into his fifties,” says Mumtaz. “For elephant poaching alone, he will get five years, maximum… It will be a strong deterrent for other gangs and poachers.”

But the bandits of this area have an ability to spring surprises. The first time Veerappan was jailed was in 1972. Nonetheless, till his killing in 2004, he was almost king of the forests here. How the legend of Veerappan 2.0 will play out is anybody’s guess.