The Art of Stealing

With his latest burglary in Kerala, master thief Bunty chor, who steals to grow his legend, is back at his notorious best 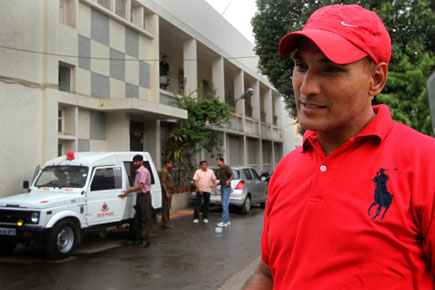 With his latest burglary in Kerala, master thief Bunty chor, who steals to grow his legend, is back at his notorious best


Back then, Bunty Chor aka Devendar Sharma spoke about heaven, and hell. Heaven, he told, was familiar space. He had been there many times. The entrance he said was through a man’s body merged with a female form. He was focussed. He didn’t stray toward sanity in these stretches of convoluted monologues. Because insanity could have been the way out of the prison.

In that strange room with a sickly yellow diffused sort of light from overhanging bulbs, and windows with grills, Bunty Chor spoke about submarines he wanted to build, the other world that he came from, and how the police were mistaken that he was the super chor, that he wasn’t the suave thief who had more than 500 odd cases of thefts against him, but a man who looking for the ‘naag mani’ and would return to his planet only if he could get out here. He also told me he was 130 years old. He said his submarine would also fly in the sky, and it would liberate men and women. He was pretending to be of “unstable mind” so he could get away without serving his time in the prison.

It was four years ago that I met him in Tihar Jail’s No. 4 prison, a high security prison. He was serving his conviction in 60 cases out of more than 500 alleged cases of thefts against his name. Since, sentences ran parallel and these weren’t heinous crimes, he was acquitted in 2010.

Rajinder Singh, the super cop, who nabbed Bunty chor, is not surprised that he stole a luxury car this week in Kerala, and in fact chose one of the most secured places to break in. Not because he needed the money, but because he believes in his own myth – the myth of being the invincible thief, the new age Robin Hood, the thief who inspires script writers.

Oye Lucky! Lucky Oye!, the film starring Abhay Deol was based on his life. In fact, I had gone to that neighborhood and children shouted his name, and sang the title song of the film. They seemed happy about the little neighborhood’s claim to fame. After all, Bunty Chor had a car like the Batman’s car, which he operated with a remote control, and that he was a master thief, who stole because he wanted to. Not for game, but for fame.

Since 2007, when he was lodged in Tihar’s high security prison, he has had no visitors. When I said I was his childhood friend, they let me in. In those days, they weren’t so strict about who the inmates met during the mulakaat hours.

He was first arrested in 1993 in New Delhi, and he had managed to run away from the office of Special Staff. Later, he was caught in Chennai, and he ate glass pieces in judicial custody and managed to get admitted in the government hospital. He freed himself from the handcuffs using disposable syringes. In fact, these cases were also registered against him.

Again, he gave police a slip in Chandigarh when he grabbed the scooter of a police sub-inspector and rode away to freedom. He was nabbed again in Bangalore and remained in custody until 1998. But he was back to doing what he did best – stealing.

He stole what he fancied, or what posed a challenge. A dog, cutlery, watches, parrot, anything.

Once, he broke into a house, and the daughter of the house was watching pornography. He reprimanded her, gave her a moral lecture, and went on about stealing stuff while she watched without raising an alarm. Too ashamed.

He was arrested later in 2002 and by then he had 200 alleged cases of theft against him. This was when Rajinder Singh first arrested Bunty Chor, and the master thief’s girlfriend dumped him. His total worth was more than Rs. 6 crore, and he stayed in five-star hotels, and wore expensive clothes and watches.

They recovered Rs. 5 crores worth of goods and there was an auction at the Lodhi Road police station where the owners came and reclaimed their stuff. Only a diamond necklace wasn’t recovered. He had gifted it to his girlfriend. Heartbroken, Bunty chor languished in prison, and Rajinder Singh believed him when he said he would get reformed, and life should give him a second chance. Love eluded him, family rejected him, and he was a pariah. Someone should have hope in him, he said to Singh.

“He had a typical style. He stole only what he liked,” Singh told me. “But he was such a humane character. I was never disgusted with him. And let me add, very intelligent too. When you deal with a genius thief, you got to plan. It was a great challenge for us.”

They used to have long conversations. When Bunty got out of the prison in 2006, after serving his full term, he promised Singh that he would lead an honest life.

One day, Bunty called Singh to tell him he was going to Bollywood.

But he struck again. Car thefts, and the chase began. Bunty kept calling Singh, and the two kept talking. But one was running from the other, the other was out to get him. He said he didn’t have options. It was difficult to start afresh.

Incidents of thefts of luxury cars were reported from several parts of Delhi — Defence Colony, New Friends Colony, Hauz Khas and Malviya Nagar and these were in typical Bunty style.

“He had a thing for nice cars, he wanted branded watches, and he couldn’t live his life on a salary of around Rs. 10,000. The police believed him yet again, and found him a job as a detective in a private firm,” Singh said. “He helped us. But he was desperate. His family denied him his share in the property, his other girlfriend left him, and he wanted to prove himself, and he wanted to tell the world he is invincible.”

In June 2010, I met him again at the Lodhi Road police station. He had put on weight and his cheeks weren’t sunken anymore, and he wore a red shirt, and a baseball cap. He smiled.

“Have you grown your hair?” he asked. “I remember you met me last year in prison.”

So, he wasn’t the mad man with dreams of building submarines, who said his name was Hari Thapa.

He told me he wanted to start living a decent life, and he would call me with updates.

And then, he wanted to get his due. From Dibakar Banerjee, the director of the 2008 film Oye Lucky! Lucky Oye! who he said should cast him in his next film. Then he went to Big Boss 5 and got hair transplant, and thought he became the star he always wanted to be. But then, it didn’t last. He was on the run again. He was arrested last year in Bhopal, and was released on bail. He resurfaced in Kerala this, and broke into the house with CCTV cameras, and spent close to three hours breaking into the Mitsubishi Outlander, and drove the SUV away.

“The police can only do so much. He had no place to live. He is a fascinating character, and I know he didn’t do this for money. He wants to remind everyone he is around. He likes the challenges. Initially he was on the right track, but neither family, nor society accepted him. He went back to the same system,” Singh, who was the SHO at the Lodhi Road police station at the time, said. “I met him before he was arrested in Bhopal. He had sorry long ago. I understand his case. He wants too many things. He is committing crime for fame, not for game. The media glorified a negative character and now he thinks he has become the hero.”

I still have Bunty Chor’s number saved on my phone. Sometimes, I try it out of curiosity. Just to ask if he remembers me, and what he is up to. Last time, he had told me he was balding and he wanted to get a hair transplant. But now I hear the message, “The number you are calling is not available at the moment. Please try later.” Maybe I will.