Atram led a modest life of anonymity in faraway Chandrapur, until he found himself listed as the owner of a flat in Mumbai’s Adarsh Housing Society. 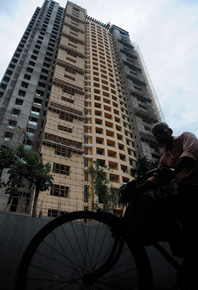 Atram led a modest life of anonymity in faraway Chandrapur, until he found himself listed as the owner of a flat in Mumbai’s Adarsh Housing Society.


Atram led a modest life of anonymity in faraway Chandrapur, until he found himself listed as the owner of a flat in Mumbai’s Adarsh Housing Society.

On the list of those who have been allotted flats in the controversial Adarsh Housing Society in South Mumbai’s tony Colaba area, Suresh Gulabrao Atram’s name stands at No 86. Atram, 42, is from Maharashtra’s far-flung Chandrapur district, and given his work profile—he is a small time electrician on daily wages—he could not have made it on his own to this high-profile list which includes politicians, ministers and IAS/IPS officers, apart from top officials of the defence forces. Yet, his name shines bright on this A-list as the owner of a flat worth Rs 78 lakh.

Till very recently, Atram had never heard about Adarsh Housing Society or the controversy around it. In fact, he has never been to Mumbai in his entire life. His only familiarity with the city is via television or Bollywood flicks he sometimes watches in a C-grade theatre in Chandrapur.

Since money is always a constraint for Atram, travelling, eating out, watching films or buying new clothes are indulgences he cannot easily afford. He earns anything between Rs 60 and Rs 100 on a good day, which is not too often. Sometimes he has no electrical work to do for prolonged periods. At such times, he works as a hamal (labourer).

It was on a muggy day about a week ago that Atram had his first intimations of fame. He was busy getting ready to leave his 200 sq ft house in one of Chandrapur’s run-down localities when he heard someone utter his name. His first instinct was to hide. He thought it was a debt collector. It was only after the caller identified himself as someone from the media that Atram succumbed to curiosity and summoned the nerve to venture out.

Within moments, all hell broke loose. His life has been a strange swirl of quasi-scandalous semi-celebrityhood since then. “There were some people from some newspaper, and they kept asking me about this flat in Mumbai. I was scared. I have never been to Mumbai, have trouble assuring my family two square meals a day, and these strangers accuse me of owning a flat in Mumbai!” says Atram, speaking from Chandrapur. “No one let me speak, so I kept quiet [at first]. When everyone finally stopped talking, I told them that there had been a mistake and that someone had played mischief.”

The only time he ever left Chandrapur, he says, was to participate in the Ramjanmabhoomi karseva at Ayodhya, and this too was only because his expenses were picked up by a political party. “I came back midway,” he adds, “I was not interested in what was happening.”

As for the Adarsh Housing Society, he heard of it only after the media started badgering him about his alleged ownership of a flat there. After all, he explains, he is not a good follower of newspapers or TV news. Reality shows are more to his liking, as he dreams of getting rich and eating out at one of the fancy glass-front restaurants he sees around Chandrapur.

“Someone has booked a flat in my name,” he says, wondering how his identity could have been swiped for such a strange purpose. “The only time I gave a photocopy of my ration card was for a mobile phone connection. Otherwise, I have submitted my bio-data to many places for jobs. Someone has misused my documents.” That, he can say again.

Document misuse is a common peril for anyone in India with certificates that beget government benefits. Atram happens to be a certified member of a Scheduled Tribe, but oddly enough, no caste validity certificate was submitted for the Adarsh Housing Society flat. Since his address was mentioned only as ‘Chandrapur’ in the Adarsh list, Atram had to be located by investigation officials through the state’s electoral rolls.

Anyhow, as his fame spreads through the area, Atram is beginning to adopt the ways of the famous in his own humble way. A must-talk-to figure in Chandrapur now, he is starting to live up to his new stature. He is also becoming conscious of how he looks. He even borrowed money to buy a new set of clothes to “present himself well” before TV cameras. His ambitions, too, have grown—especially his idea of a vacation: “I want to go to Mumbai and see this Adarsh Society which has made me famous.”

In more sombre settings, Atram confesses that anyone who meets him at home knows very well that someone has played hanky-panky with his identity. And there may be a price to pay for his fame. “What if my documents are used for some criminal activity? Whoever has done this can do something else too,” he fears, “How can poor people like me prove our innocence?”

As investigation agencies begin their effort to nail the real culprits, Atram has been told by people that he too will have to answer some uncomfortable questions. This scares him no end. In the big, complex world of property and pelf, he does not know who is a friend or foe. He blames his “bad times” on destiny. “I am told that the price of the flat in my name is Rs 78 lakh. In all my 42 years, I have never held a Rs 1,000 note, so I cannot imagine what Rs 78 lakh is like. God will punish those who have cheated a poor person like me.”

While he awaits divine relief from his sankat (troubles), he has adopted a new routine to hasten the process. He fasts every Saturday and prays to Lord Shani to intercede as quickly as possible.