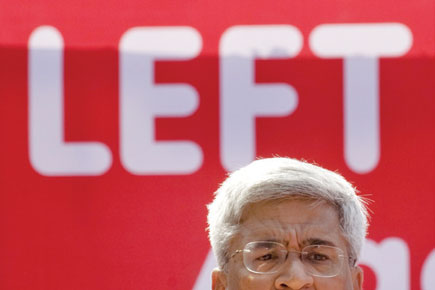 
Flip, flop and then flip again. This seems to have become the CPM’s mode of functioning. Merely two months after the party congress upheld Prakash Karat’s line of giving up the Third Front project at the national level, a rethink seems to have begun within the CPM: the idea of a non-Congress, non-BJP alternative at the Centre has been revived.

The rethink, touched off by a CPM victory in the Shimla Municipal Corporation’s mayoral and deputy mayoral elections, was evident in the two-day deliberations of the party’s Central Committee meeting that concluded on 10 June in New Delhi. ‘The defeat of the Congress, which was running the corporation, and of the BJP, which [runs] the [Himachal] state government, shows that people will vote for an effective alternative to the Congress and BJP, if it is presented,’ says the press communiqué issued at the end of the meet.

According to sources, several members of the Central Committee were of the view that the party must quit wallowing in its worries and work instead to erect a third governance option. “What happened in Shimla is possible elsewhere too. The party should grab the opportunity,” says a senior CPM leader, “That would, however, mean giving up the tactical line adopted only recently at our party congress.”

The party congress, which meets every three years, is the party’s highest decision-making body. It lays down the political and tactical line for the intervening period and elects leaders to implement its decisions. What is significant this time is that the line adopted at the Kozhikode party congress held in April has begun looking outdated already—in less than a year.

The Central Committee meeting held in Delhi last week was the very first since the Kozhikode congress. If the murmurs heard at that meeting gain force, the CPM might once again start striving to rope in non-Congress secular parties to offer India’s electorate a third alternative for the general election due in 2014. The party’s previous attempt, ahead of the 2009 general election—an attempt with which Karat appeared so obsessed—had failed miserably, forcing him to dump the idea altogether. By the time the Kozhikode congress was held, the CPM leadership had already made up its mind against any such experiment in the near future. “There is no discussion on the Third Front at the ongoing party congress,” Karat had told mediapersons at the end of the party congress two months ago. “We are for bringing together democratic and secular forces for joint action on people’s issues,” he had said, adding that the

CPM could consider tie-ups in different states, which, he said, would depend on local conditions.

That was a significant departure from what the CPM general secretary had been pursuing until then. And, in many ways, this shift in approach was an extreme step for the party. For, under Karat’s pragmatic predecessor, Harkishan Singh Surjeet, the party had always managed to keep its Third Front project going without getting altogether obsessed with it. It was the conviction that Surjeet held with secular regional parties on the political necessity of such a project that gave the CPM its role as its anchor.

But the way that Karat has handled the idea, especially after the Left’s withdrawal of support to the Congress-led UPA-I over the issue of the Indo-US nuclear deal in 2008, has left the CPM redder in the face than its flag. Not only did the party lose substantial strength in the Lok Sabha, a section of the party leaders even blamed the party general secretary’s Third Front experiment for uniting opposition votes of the Congress and Trinamool Congress in West Bengal, thereby facilitating the fall of its red bastion in east India. This anger, in fact, turned so vociferous that Karat made a complete U-turn and dropped the idea like a hot potato, instead of continuing with the party’s low-intensity engagement with regional parties—a tactic that Surjeet had perfected in his time.

The CPM’s surprise victory in the Shimla Municipal Corporation, though a minor one in the larger scheme of Indian politics, has once again triggered a debate in the party on whether giving up all hope of a non-Congress, non-BJP option would be pragmatic at a time when a large section of the Indian electorate appears disenchanted with both the major parties.

The debate, if it gains strength, would not only help end the Left’s self-imposed exile, but also make the going tougher for both the Congress and BJP. At a time when alliances can make or mar a government, a proactive Left could be a game changer. If the Left attracts a few of India’s regional parties away from either the UPA or NDA, all political calculations would need to be redone. There is enough reason to believe that the Left is the country’s only political formation, apart from the two main parties, that is capable of acting as an adhesive for disparate secular regional formations.