Rebel without a Pause

Mamata Banerjee may have always been mercurial and autocratic, but there are signs that she is aware of the responsibility brought upon her by electoral victory 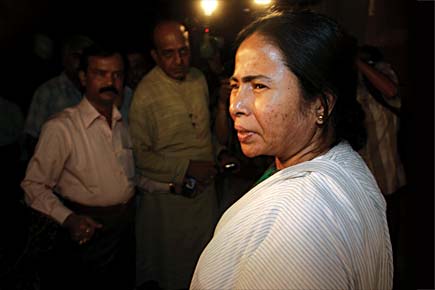 Mamata may always have been autocratic, but there are signs that she is aware of the responsibility brought upon by an electoral victory


The first time Mamata Banerjee made it to the front pages of newspapers was when she clambered on top of Jayprakash Narayan’s car as a Youth Congress activist in the mid-1970s. ‘JP’, who had launched a campaign against Indira Gandhi, had come to Calcutta, and the Congress was naturally protesting his visit. Photographs of an angry Mamata, then a little over 20, atop the car were published as the lead photo in many newspapers. Nearly 35 years later, little has changed in this ‘stormy petrel’ of Bengal. Mercurial, unreliable, impulsive and given to histrionics—that’s how she’s usually characterised. And not just by her critics, even those who’re close to her. It’s because of her reputation as a ‘rebel without a pause’ (without a cause either, some say) that the intellectuals who act as her close advisers are keeping their fingers crossed that she won’t storm out of the Union Cabinet again.

Going by the lady’s past actions, their fears are justified. Mamata Banerjee first became a central minister—Union minister of state for HRD, sports & youth affairs—in the Narasimha Rao government in 1991. But she dramatically announced her resignation at a public rally in Calcutta in 1993 over what she said was the government’s “indifference” to her proposals on upgrading sports facilities in the country. She joined the Vajpayee government as rail minister in 1999, only to depart angrily two years later over the Tehelka expose. Ironically, she took George Fernandes’ help—even though she had lambasted him for ‘corruption’—to get back into the Cabinet in January 2004 as coal & mines minister.

But it’s not only the Cabinet that she habitually turns her back on. Last year, she walked out of her modest house on Harish Chatterjee Street in South Kolkata’s Kalighat area, accusing her brothers of using her name to secure lucrative real estate deals. She shifted to her party office with mother Gayatri and docile dog Laden (named after, yes, you-guessed-it), and stayed there for a few days before returning home.

To her supporters, all this is merely more evidence of her uprightness. “Far from coming across as mercurial,” says close associate Madan Mitra, “her resignations from the Cabinet or her departure from her own house show that she’s highly principled and doesn’t care for power, profit and material comforts… she can sacrifice anything and everything for her principles and ideology.” Millions across West Bengal agree. It’s what endears Mamata Banerjee to them.

Born on 5 January 1955, the Trinamool Congress chief completed her Master’s in work education before getting a degree in education and another in law. It was as a law student in the early 1970s, at Jogesh Chandra Chaudhuri Law College, that she joined the Congress’ Chattra Parishad. Her boldness in taking on the Left-aligned Students Federation of India (SFI) headfirst saw her achieve instant glory within the party. Before long, she caught the eye of Congress leader Subrata Mukherjee, who became her political mentor and elevated her to the state’s Mahila Congress general secretary’s post in 1976. Awarded the Congress ticket against veteran Marxist Somnath Chattopadhyay in the Jadavpur Lok Sabha seat in 1984, she vanquished the heavyweight and earned the reputation of a ‘giant slayer’. “It was from this victory that she started building her reputation as a daredevil, the only one in Bengal’s opposition ranks with the stomach to take on the CPM,” says Subrata Mukherjee, who she has since distanced.

Nayana Bandopadhyay, a former movie star, claims credit even now for having groomed the lady once—“I taught Mamata how to use a towel
and cosmetics,” she told amused scribes a few weeks ago. But if the Trinamool chief has lost several experienced hands to her imperious ways, she has, over the past two years, gained many supporters as well. Like ex-IAS officer Debabrata Bandopadhyay, who played a role in the Left’s famous
land reforms. Then, there’s a slew of intellectuals: prominent artist Suvaprasanna, theatre personalities Shaoli Mitra, Kaushik Sen and Bratya Basu, academics Sunando Sanyal and Pulak Narayan Dhar, writer Mahasweta Devi, and environmentalist Kalyan Rudra, among others. They have banded together to guide Mamata Banerjee and her parliamentarians on policy issues and to monitor their performance.

“What’s different this time is that these people aren’t in active politics and Mamata faces no political threat from them,” says Congress leader
Pradip Bhattacharya, “So the chances of a rift with these people is minimal, even non-existent.” Yet, it’s clear that their support has contributed
in no small measure to her acceptance now among middle- and upper-middle-class voters.

Critics are not impressed. They say Mamata Banerjee remains as autocratic as ever, pointing to her giving up the UPA’s offer of an extra Cabinet post this time. “She didn’t want another party colleague to gain equal prominence,” says a former Trinamool MLA on condition of anonymity, “So she was happy distributing MoS berths to her MPs. This reveals her insecurity.” In closed-door meetings with party colleagues, he adds, there’s little respite from her dictatorial tendencies. “Her word is the law in the Trinamool.”

Mamata Banerjee’s latest whims and fancies are a live subject of gossip among her colleagues. Her insomnia only adds to it. “She calls up at odd hours,” says a former legislator who has quit her party, “Once, I had kept my mobile switched off one night and she called up. The next afternoon, when I called back, she gave me a mouthful. But no one dares disturb her before noon.” Then, there are her sudden impulses that her aides must constantly worry about; an urge to paint one day (Goddess Kali, women, trees and shrubs) and write poems the next (of literary merit they dare not deny). They don’t relish being snapped at for failing to conjure a new canvas, water colours or writing pad at the snap of her fingers.

To the few, those are professional hazards. To the many, her nuisance value is legendary. Quite simply, few politicians have ever proved themselves
as disruptive of everyday life as she has. She is given to calling a bandh at the drop of a topi, and hurling things at people. She flung her shawl at Railway Minister Ram Vilas Paswan in February 1997 and resignation letter at Deputy Speaker Atwal in August 2006. She’s even known to grab people by the scruff of their collars.

While the Congress may be Trinamool’s ally now, some Congressmen still haven’t forgiven her for scoffing at them before she broke away and formed the Trinamool Congress in December 1997. She had termed the Congress “the CPM’s B team” and likened the party to water melons—green outside but red inside.

If Mamata Banerjee has a credo, it is rebellion. But she can ill afford to hurtle down the path she’s been before. Any false move, and the CPM will project her as an irresponsible agitationist, or worse. To her credit, she has displayed some signs of maturity. Surely, the wider significance of her Lok Sabha triumph is not lost on her.