Jayalalithaa ran a campaign focused aggressively on that name. To a thunderous response. 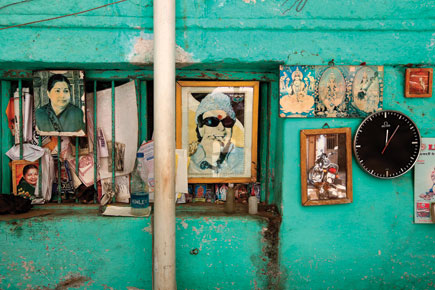 Jayalalithaa ran a campaign focused aggressively on that name. To a thunderous response.


Jayalalithaa ran a campaign focused aggressively on that name. To a thunderous response.

CHENNAI ~ Some sights say it all. As it becomes clear the AIADMK is headed for a thumping majority in the Tamil Nadu Assembly, outside party supremo J Jayalalithaa’s Poes Garden residence, one man dances holding up a redesigned currency note with the figure ‘Rs 176,000 crore’. In place of Mahatma Gandhi’s image, there are A Raja and MK Kanimozhi. One, the 2G-scam-tainted former telecom minister. The other, the scam-haunted daughter of the state’s former CM, M Karunanidhi. Their party, the DMK, has been routed—leaving its ally, the Congress, plenty to ponder.

If Raja can draw any consolation from the event, it is that voters in his native constituency of Perambalur, 270 km south of Chennai, still swear by him. Dorai Murugan, a DMK leader, had been clear that the town would stand by Raja even if he were sentenced in the case. “Raja has been made a scapegoat in the entire episode,” said the leader earlier, “He has been responsible for strengthening the DMK in this region, and it took us many years to wrest the area from the AIADMK, which had always been strong here.” He dismissed outright any suggestion that the 2G scam could kill the DMK-Congress alliance. “Where is the connection? The scam is a creation of the English media. It has no trickle-down effect on the people of Tamil Nadu,” he said, confidently.
But that was before the results came in. Though Raja has shifted to the Nilgiris parliamentary constituency, Perambalur is still the place he is identified with.

The town has lately seen an unregulated real estate boom that has been interrupted by Raja’s sudden loss of power, some say. Many buildings stand half-built, lending credence to rumours that most belong to Raja and his cronies—including local realtor Sadik Batcha, a co-accused in the 2G case, who committed suicide some time ago.

In Raja’s native village of Velur, nearly every wall bears the DMK’s rising sun symbol. Two boys on a motorcycle approach us, asking what we are doing here. When we respond, they lecture us about journalistic ethics. But they themselves refuse to answer any question on Raja’s ancestral home. “There is nobody here,” they say gruffly, “Please leave.” Once we locate the house unaided, even more aggressive youngsters mob us. “No photos,” they say, as one of them gets on the mobile to ‘anne’ (elder brother)’ to complain of our intrusion. The anne, Tamil Selvam, turns out to be more sober, and explains over the phone that there is no one at home since a relative had to be hospitalised in Chennai. Then he instructs others to ensure we leave.

For Raja, and the rest of the DMK, there is nothing to celebrate. Whispers are rife among party members that the ageing Karunanidhi should have lent an ear to his elder son, MK Alagiri, and distanced Raja well in time for the polls. Such talk suggests that a full-blown power struggle within the party could break out soon. Defeat tends to bring finger-pointing, and the DMK could see it happen with a fury rarely seen in politics.

The immediate threat for the losing DMK, however, is Jayalalithaa’s fury in a state well known for vendetta politics. ‘The rule of law’ was the thrust of her campaign, as she went about highlighting the DMK’s “corruption and nepotism”. She launched blistering attacks on the DMK and even promised to reopen old cases in which Alagiri had been acquitted, including one of murder. “DMK leaders will be punished,” she had thundered, “They will go to jail.” She almost made it sound like part of her manifesto, to which she’d be duty bound. “Raja is already in jail. Kanimozhi will soon follow suit. The rest, like Alagiri, his brother [and former deputy CM] MK Stalin and other DMK leaders will be taken care of by Amma,” says an AIADMK leader on condition of anonymity, as his party’s victory becomes clear on 13 May, “They are involved in so many scams that it’s hard to count. After all, we won public support on the corruption and nepotism issue. The electorate wants us to punish them.”

For the humbled DMK, there is little solace in the fact that the Congress, which contested 63 seats in alliance with it, has fared even worse. The 2G scam seems to have jinxed both parties’ fortunes in Tamil Nadu. What observers wonder is whether the alliance will survive the electoral drubbing. “The alliance is in one piece,” Youth Congress leader Karti Chidambaram told a TV channel, “It did not get the winnability we desired, which the DMDK [led by actor Captain Vijaykanth] managed for the AIADMK.”

Yet, what is going to happen next is not so clear. There are reports of a deep rift between the youth leader Karti Chidambaram’s father, Union Minister P Chidambaram, and senior Congress leader GK Vasan. The two had been at odds earlier too, and the state’s loss could sharpen the divide. But then, the Congress has mostly itself to blame. It mishandled the 2G scam, trying to distance itself from it (in vain, at least in Tamil voters’ view), and has suffered for it. While it tried to present a picture of integrity by taking action against the individuals involved, it couldn’t escape the fate of its ally. There is a reason that Jayalalithaa’s message rang home. And ignoring it has its consequences.