“Put the Lokpal Bill to referendum” 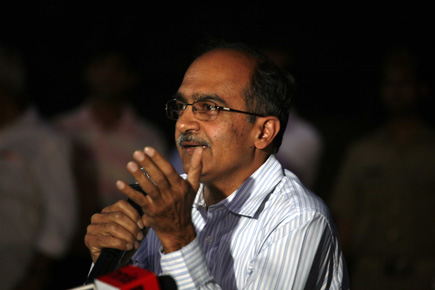 
Prashant Bhushan, one of the chief architects of the Jan Lokpal Bill, speaks to Open in its defence

Q. How fundamental is the Jan Lokpal Bill in the fight against corruption?

It is very easy to say you are undermining democracy. What kind of democracy do we have? You have a corrupted election process by which you elect people, and then for five years they are supposed to rule you without any reference to the people. Democracy means rule by the people. That is why we are saying the next thrust of Anna Hazare’s campaign would be to make democracy more participatory. Institutionalising the participation of people in the democratic decision-making can be done in many ways. For example, the nuclear deal should have been put to a referendum in this country. The Lokpal Bill can also be put to a referendum. Let the government’s Lokpal Bill be put to a referendum vis-à-vis our Jan Lokpal Bill or any other Lokpal Bill prepared by any other credible citizens’ organisation. In the previous century, there was no mechanism to get people to participate in decision-making. Today it is possible because of technology. Why, then, should we not institutionalise a more participatory form of democracy. It is alright to question whether Anna Hazare represents the will of the people. It is true that you can’t determine this. But the government did respond to Anna Hazare. It does not respond to anybody who goes on a fast. It responded to Anna Hazare only because it felt that today he commands the support of a very large section of society. Now we are saying, let us institutionalise this, let us find some way of determining how many people support what, how many people want what. Instead of allowing these intermediaries who are elected once in five years, we need to democratise the decision-making process in such situation.

Q. How can technology change the scope of decision-making?

A. You can set up an internet kiosk in every village, where people can vote every day, if necessary. Therefore, if you have to take a decision, you may have a referendum. You can have a daily referendum on different issues. You can have a local referendum on a local issue, you can have state-level referendums on state-level issues. In fact, the whole idea of the Gram Sabha in PESA [Panchayat Extension to Scheduled Areas] Act is this: that it is not the elected representatives but the entire collective of the people that will take decisions for a village. That’s what democracy is. We adopted a very imperfect kind of democracy because we thought that people cannot meet and take decisions every time. It is true, people cannot. Even today it is not possible for everything. There is also the problem of narrowing down the choices to a manageable level, because there can be an infinite number of Lokpal bills can be proposed. How would you, then, put them to vote? You have to have ways of narrowing down the choices. In that process, maybe elected representatives can play a part. But eventually the decision should be left to the people.

Q. Do you want the future of the Lokpal Bill to be decided by referendum?

A. I don’t think they will agree to a referendum, but we would like it to be put to a referendum. Let the government bring its own Lokpal bill and let’s test this out.

Q. That’s a good option because the government cannot possibly have a defence against that.

A. They will raise other things, why only your bill? They will set up thousands of people to prepare thousands of bills. That way you can frustrate everything. But the point is, we can find some ways to do this. One way may be a signature campaign. If two per cent of the population put their signatures in support of a bill, then let it be put on the table. And this will be the only bill that may be put on the table. Then let this and the government’s bill be voted upon. We would welcome that. That would call their bluff. They are saying that they represent the democratic will of the people. Let us see, then, who represents the democratic will of the people.

Q. So it is an imperfect democracy, as you say. But the question is, are civil society representatives holier than the political class?

A. It is not a question of whether civil society is holier than the political class. It is indeed holier than the political class, for the simple reason that they are the people, and these people [the elected representatives] are only representatives of the people elected via a corrupt election process, held once in five years. People are the masters, not their elected representatives. It is another question who represents civil society: whether Anna Hazare or Aruna Roy. Certainly those questions will arise, but let us then find ways of institutionalising the involvement of civil society, so to say, in democratic decision-making to make democracy more participatory.

Q. There is something that makes me skeptical of Hazare…

A. Let me clear my position. Firstly, I don’t say that just bringing this Lokpal will by itself solve the problem of corruption. The Lokpal is designed to address one side of this problem, the supply side, by creating an independent and empowered institution that takes action against the corrupt without having to take the permission of the government. But it is not law unto itself by any means. Such criticisms are all totally misconceived. It is accountable in three ways. Firstly, the law itself provides that it has to function transparently. All its transactions and all its orders and proceedings etc. would be made available to the public. Secondly, its orders will be subject to normal judicial review in high courts and Supreme Court. Writ petitions can be filed challenging its orders. Thirdly, and most importantly, the members of the Lokpal are accountable to a five-member bench of the Supreme Court. So it’s not unaccountable. Also it is not vested with any judicial power. It would have powers of investigation and prosecution, not adjudication. Adjudication will be by the courts.

Q. As regards referendum, is this your personal view or do other members in the joint committee (on Lokpal Bill) concur?

A. Arvind [Kejriwal] has been working on this for a very long time, particularly on how the Gram Sabha model can be implemented in cities. So we are trying to see how this can be done because this needs to be thought out thoroughly. There are some obvious decisions that can be put to referendum. For example, the nuclear treaty, where there is a yes-or-no question; it could have been put to referendum. But where it’s not a simple yes-or-no question or where there are multiple choices available, there you have to device some way of narrowing down the choices to manageable levels. Where a decision has to be taken instantly and you cannot wait, again it can’t be put to the people. But the main thing is, let’s start moving in that direction. It is possible that because of the money factor etc., there may be, what Chomsky calls, ‘manufactured consent’, but the danger of that is much less than those with commercial interests like nuclear power companies etc directly bribing a few people who are taking the decisions.

Q. What is Anna Hazare’s take on the referendum issue?

Q. Do you suggest electronic voting machines be used for referendums?

A. They could be. But it’s easier to do this through internet kiosks. You can set it up in a manner so it is as fool-proof as electronic machines. The danger of using internet kiosks is that one can make software to that can corrupt the process, but one can set up safeguards for that. The referendum will avoid all criticism about whether Anna Hazare represents civil society or not.

Q. Do you think people expected Anna Hazare to be a particular kind of person that he is not?

A. People have rallied around him only on the issue of corruption. For two reasons. One, they see corruption as a major issue, and two, Hazare is seen as an incorruptible and selfless person. To what extent people will rally around him on other issues will depend upon how he is perceived on other issues. But as I said, on the issue of corruption, he will continue to enjoy a lot of support.

Q. Can it be that the Jan Lokpal Bill alone is presented with the yes-or-no option?

A. That can also be done. The only problem is that many people will then ask why this particular Lokpal Bill alone.

Q. Because the Jan Lokpal Bill is perhaps the harshest possible bill that can be imagined. All others would only be softer than this. Isn’t it?

Q. Many people see strong a RSS presence in Anna Hazare’s agitation. Anna Hazare even called Narendra Modi a role model for other Chief Ministers. What is your observation?

A. I don’t think that he called Modi a role model. I think what he said was he praised rural development in Gujarat and Bihar. I don’t agree with that statement of Anna Hazare. I feel uncomfortable with this kind of statement. I also feel uncomfortable with people like Baba Ramdev and to some extent with Sri Sri Ravi Shankar. However, as long as these people are not in the decision-making of the campaign or they are not part of the strategy-making for this campaign, and if they just want to support the campaign, I think there is nothing objectionable in that.

Q. But Anna himself is leading the decision-making, and he is the one who expressed his softness towards Modi.

A. Not softness towards Modi, but he… I mean… he is politically naïve… that’s my… I don’t think he has any saffron inclination as far as I can tell and as far as I have been able to understand him. I don’t think he has any partisan political agenda, and I think his statement on Modi can only be attributed to his incomplete understanding of what really happened in Gujarat.