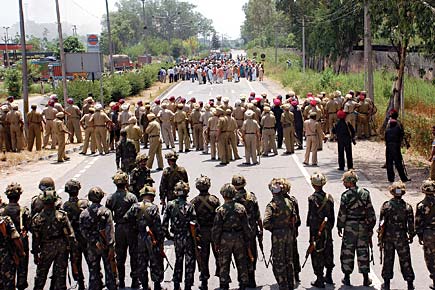 
JUST A WEEK before the 25th anniversary of Operation Bluestar, Punjab burns again, sending another set of shudders far and wide. Yet, there is more reason for hope than fear in the sequence of recent events that began with a flashpoint on 24 May in Vienna. Odd as this may sound amidst televised scenes of arson and violence across urban Punjab, they actually show things have changed for the better. The state has come to terms with democracy and what it implies.

Consider this. The state has learnt to cope with periodic provocations—Dalits battling Jutt Sikhs at Talhan in 2003, followers of Dera Sacha Sauda being attacked in 2007, and now violent protests by Dalits—without spiralling into the kind of violence that ravaged Punjab during its 15 long years of terrorism.

The recent conflagration should be seen in two parts. The first involves the location of the incident that sparked it off. It’s not coincidental.

It was an attack on men who spend most of their time in Punjab, but the incident took place in Vienna. That it occurred so far away, in Europe, is an indication in itself that proponents of such violence now survive mostly overseas—among the sprawling web of Sikh expatriates. Within India, space for the employment of such dubious methods to settle disputes has shrunk considerably over the past two decades. While the reverberations in Punjab have been quite unrestrained, chances of an outbreak of mass violence against people are minimal.

The second involves what the ensuing protests in Punjab actually represent in sociological and political terms. They reflect the growing ability of Dalits to assert themselves. This is a sign of how the politics of caste and community are being played out in the state after the end of militancy.

To understand these events, one has to start with the Sikh community abroad. Cities such Vienna, London and Vancouver have long harboured the riffraff of the Khalistan Movement (for a separate homeland for Sikhs in Punjab), and Western governments in general should be held accountable for the trouble caused by their actions. Note that the Khalistan Zindabad Force has claimed it carried out the attack.

It matters little if this is indeed the case; it was certainly carried out by men who believe in an impossible dream and in the use of violence in its pursuit. These self-proclaimed Khalistanis are part, now thankfully shrinking, of the vast stream of migrants mainly from the Doaba region around Jalandhar who were forced by the shrinkage of fertile landholdings to move to places such as San Francisco, Vancouver, London, Hong Kong and even Vienna.

At the beginning, these migrants brought back progressive and liberal ideas to Punjab, as was the case with the secular Ghadr revolutionaries who fought British rule in the earlier half of the 20th century. But after Independence, Sikh migrants started exhibiting the classic characteristics of such diasporas—they remained frozen in their attitudes while Punjab and India moved on.

There is enough evidence to suggest that ‘orthodox’ Sikhs abroad have continued to fuel recidivism within the community, so it is likely that the men who carried out the Vienna attack on the head of the Sach Khand Dera embody the mindset of the late 1970s and 1980s that Punjab has lived to regret.

By the machinations of this mindset, the Sikh orthodoxy is projected as being under siege by preachers loyal to Sant Ravidass, the Dalit medieval religious poet, because these preachings deviate from the essential message of the Sikh faith.

The truth is that the compositions of Sant Ravidass find an honoured place in the Guru Granth Sahib—the sacred book of Sikhs—and the real battle is for control over the wealth that the expatriate community channels into Punjab. Till recently, the single gurdwara in Vienna was run by Sikhs loyal to the Khalistan Movement. When adherents of the Dera Sach Khand opened another gurdwara on the same street, the prospect of a division in fund flows threatened the Khalistani hold. In Punjab, there is a term for such a battle—goluk di ladai, a fight over religious offerings.

While this explains the attack, it does nothing to explain the reactions in Punjab. The origin of these, in turn, can be traced to another event in the history of Sikh migration that connects the events in Vienna with something that happened in California 85 years ago.

If the Sach Khand Dera draws inspiration from the compositions of Sant Ravidass, its following comes largely from the Dalit Ad Dharmi sect, which was founded by a man named Mangoo Ram who returned to the Doaba in 1925, after a long stint in California.

Back on the West Coast of America, Mangoo Ram had interacted closely with Ghadr revolutionaries, but in the end he chose a path of his own. He wanted his community of leather workers to assert an identity independent of both Sikhism and Hinduism. The sub-community had already grown somewhat prosperous after Jalandhar, Punjab, became a British military cantonment and increased the demand for leather. It was this wealth that allowed Mangoo Ram’s father to send him to California.

Today, Ad Dharmis offer the most prominent sign of Dalit mobilisation in the Doaba region, where Dalits number more than a third of the total population, the highest proportion anywhere in the country. Under the egalitarian influence of Sikhism—which has mitigated the hierarchical social order of the caste system if not erased it—these large numbers have come to form one of the most assertive groups of Dalits anywhere in India. It is not for nothing that Kanshi Ram was born to a Dalit Sikh family near Ropar, on the periphery of the Doaba.

Their prosperity has brought Ad Dharmis into conflict with the dominant community of Jutt Sikhs often enough in the recent past. In Talhan village near Jalandhar, a fight over the control of a shrine in June 2003 had earlier brought this fault line to the attention of the rest of the country.
However, even as these incidents worry the authorities that are in charge of law and order, they also point to a rising sense of empowerment among Ad Dharmis. More often than not, they speak up for themselves.

In Punjab, such phenomena of social emergence have traditionally almost always been channelled through deras, usually congregations of disciples centred around a charismatic religious figure. So, if Jutt Sikhs get to exert control over Sikh institutions through the Akali Dal, those who feel left out tend to rally around alternatives—deras typically—that are not always quite so conservative. These deras offers them a sense of security and kinship. The congregations, in turn, attract enormous wealth and their size itself is a source of power in a democracy.

They pose the same threat to the Shiromani Gurdwara Parbandhak Committee (SGPC), the Amritsar-based apex body that oversees Sikh organisational affairs, as does the gurdwara down the street in Vienna to the Khalistanis. But this very power is now forcing a compromise with older institutions.

A case in point is the Dera Sacha Sauda, headed by Ram Rahim Singh, which again has followers who are either Dalit or drawn from marginal groups based in Haryana and Punjab. In 2007, Punjab Chief Minister Parkash Singh Badal, who has lately been appealing for peace, had looked the other way as followers of the Sacha Sauda Dera were attacked; the Shiromani Akali Dal, his party, was defeated in the recent Assembly polls in areas of the dera’s influence.

This time round, for the Lok Sabha, Badal’s peace overtures to the Dera Sacha Sauda chief played a role in the victory of his daughter-in-law Harsimrat Kaur from Bathinda.

Despite this tangled web of caste aspirations, Khalistani dreams and dera assertions, the Indian state of Punjab has demonstrated an increasing
confidence in its ability to sort out tensions. Arson and violence cannot be condoned as forms of protest, but the authorities in Punjab may have opted for pragmatism in refusing to clamp down harder on those troublemakers seen on a rampage on TV screens.

Orthodox Sikh institutions such as the SGPC, which would once have sought to draw political capital from such events, have condemned the attack
in Vienna. This in no way means that such events won’t occur again. Or that violence would be easier to contain from now onwards.

In fact, thanks to this tangled web, Punjab has no choice but to learn to live with such episodic bursts of violence, unfortunate as they are and worrisome as they often seem to observers. But it will now take only a few days, not a few years, for Punjab to return to calm.