Prelude to a Parting

After the CPM’s Vijayawada meet, Prakash Karat has made a declaration of party unity. But insiders hear a bugle call to war. 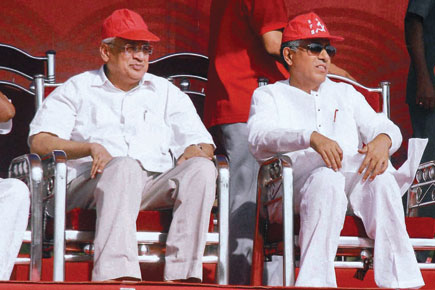 After the CPM’s Vijayawada meet, Prakash Karat has made a declaration of party unity. But insiders hear a bugle call to war.


Does history repeat? Yes, say Marxists, even if they don’t always agree how. In the summer of 1961, two warring factions of the Communist Party of India (CPI) opted for a truce in its party congress at Vijayawada. But that only postponed a party split by three years, as both sides dug themselves deeper into their respective positions, escalating the confrontation until they finally parted ways in 1964. Half a century later, as Vijayawada in Andhra Pradesh swelters in the humid heat, the city has seen another truce. This time, between two factions within the Communist Party of India-Marxist (CPM), a party born of the failed armistice of 1961.

The second truce in the city is anything but permanent, that much is clear.

As the party’s four-day Extended Central Committee (CC) deliberations drew to a close there on 10 August, there was more to read in what was left unsaid than what was said.

On the face of it, the two factions—one led by CPM General Secretary Prakash Karat and the other by West Bengal Chief Minister Buddhadeb Bhattacharjee—emerged unified on the party’s stance, particularly the fuss made over the Indo-US Nuclear Deal. With a looming Assembly election in West Bengal, where the party is at threat of losing power for the first time in over three decades, unity is deemed a must. “We have given a call for an all India solidarity campaign in defence of the Left Front government in West Bengal,” said Karat at the end of the Extended CC, “From September 12 to 18, the entire party will organise a nationwide campaign to expose the Trinamool-led combine’s efforts to weaken the Left movement in the state.”

The upbeat tone in Karat’s voice, however, does not find an echo in what delegates have to say as they leave the venue, located on Vijayawada’s Karl Marx Road. “The convergences and indirect admission of mistakes have all been there,” says a CC member, “but the gap has not vanished. The outcome (of this meet) is not at all exciting.” He reveals no more. It was a closed door conclave, with the auditorium’s walls lined with gigantic posters of Lenin and Marx. One of these posters, pasted alongside seats marked for the delegates from West Bengal, had a message from Lenin: ‘By analyzing errors of yesterday, we learn to avoid errors today and tomorrow.’

Yet, pretence overtook candour. Karat might well heave a huge sigh of relief, given that dissent on his approach to national politics—his alleged deviation from the line adopted by the April 2008 Party Congress in Coimbatore—is what forced the meeting in the first place. The Bhattacharjee faction blames the CPM’s low re-election chances in West Bengal on Karat’s 2008 snapping of ties with the UPA, which has pushed the Congress party into the arms of the Left’s challenger for power in Kolkata, Mamata Banerjee of the Trinamool Congress.

In contrast, Karat and his loyalists point at Nandigram—that is, local factors such as the Bhattacharjee government’s ‘faulty’ industrialisation and land acquisition policies.

So, what did the Extended CC eventually say in its review report on the party’s adherence to its political line?

In Karat’s words, “The review report has endorsed our stand taken in withdrawing support to the UPA government (in July 2008). However, the review report has concluded that we should not have allowed the Government to go to the International Atomic Energy Agency (IAEA)… On the electoral tactics adopted during the last Lok Sabha elections, the review report says our approach was correct, but we failed to form an effective all India alternative.”

If Karat allowed such part criticism of his leadership,  Bhattacharjee too had to contend with some. “On the land acquisition issue in the country,” said Karat, “whether it is for SEZs or setting up of big industries or for mining purposes, we will take up the issue seriously and stand up with farmers opposing the acquisition of their land.”

It sounded like a reasonable patch-up. This, however, is not the end of the story. “The party has reached a critical juncture in its political development,” says a CPM Politburo member, “At the moment, the biggest challenge for us is to save West Bengal. How the party centre should function would be taken up after these polls, maybe in the next Party Congress.”

Practical reasons are known to draw the most bitter of foes together. Yet, as far as the Karat-Bhattacharjee relationship goes, the Extended CC appears to only have deepened the mistrust. Informed sources even believe that they have finally reached a point of no return.

The two were seen sharing a dais on two occasions. But that was mere formality. Look at the other signs. All party leaders, including two Politburo members from West Bengal—Nirupam Sen and Biman Bose—reached the venue on time. But Bhattacharjee did not; he had officially reached Hyderabad on 6 August, but reached Vijayawada only on the afternoon of 7 August—after Karat’s inaugural session address was over. Again, on 10 August, Bhattacharjee skipped the party’s public rally, leaving the city an hour before Karat made his speech.

The West Bengal CM’s walkout from the last Politburo meeting in Delhi is well remembered, and his attitude hasn’t softened since. In fact, according to a senior CPM leader from the state, this was “one more manifestation” of the Bengal CM’s growing differences with the party general secretary. “All through the meet, it was Buddha’s aloofness that was most striking,” says another delegate emerging from the auditorium.

Since it soon became clear that Vijayawada would not see an outbreak of hostilities outright, even the delegates from Kerala restrained themselves from hitting out at their counterparts from Bengal. Kerala, a state with the party’s largest membership base, has backed Karat all through. Interestingly, all the four speakers from the CPM’s Kerala party unit—three being staunch loyalists of the powerful state secretary Pinarayee Vijayan—hailed the state’s VS Achuthanandan government for being “pro people”, and for working well with the party leadership. Such praise for the Kerala CM from his sworn enemies within the state unit (Vijayan and Achuthanandan have been at odds for years) is seen by observers as a subtle way to nudge the West Bengal CM into behaving himself. In fact, if there’s any single victor at the end of the Extended CC, it is the Kerala CM—though he himself was absent on account of ill health.

Neither Karat nor Bhattacharjee can claim real victory at the end of the Vijayawada meet. If the latter dared not force a showdown, he had a calculated reason. After all, the outcome of West Bengal’s Assembly election could determine his posture within the party, and speaking up too soon could harm his prospects of power too. His silence at the Extended CC is no less revealing than the measured smile that seemed pasted on the face of the general secretary.

To Karat’s critics, it was a smile that confounds common sense, given that the man now has the dubious distinction of being the party’s first general secretary ever to have been forced to admit mistakes in implementing the political line, the violation of which is sacrilege to a communist party.

No matter how Karat tries to underplay the criticism, the record could return to haunt him at some juncture, since his detractors are not going to let go of it. Of his predecessors at the head of the party—P Sundarayya (general secretary of the party from 1964 to 1978), EMS Namboodiripad (1978 to 1992) and Harkishan Singh Surjeet (1992 to 2005)—none was taken to task thus.

And yet, the truce achieved at Vijayawada is different from the one that the CPI’s warring factions arrived at in the same city back in 1961. “There is a basic difference between 1961 and 2010,” says a senior delegate who is in his late seventies and claims to have watched from “close quarters” the deliberations of the CPI’s Vijayawada Party Congress 49 years ago. “That time, the general secretary of the party, Ajoy Ghosh, kept himself above factional politics. But this time, the general secretary is himself leading one of the factions.”

This is an observation that says a lot about which way things will go for the CPM this time round. All signs suggest that the die is cast. No matter how hard CPM leaders pretend that everything is okay with the functioning of their party, after a year of turmoil following its Lok Sabha drubbing in May 2009, the divide within is very likely to become a divide without. There are some things that grand posturing can buy, such as time, but true unity is not one of them.