Pinarayi Vijayan: The McMarxist From Malabar

Chief Minister Pinarayi Vijayan of Kerala, a communist feared as well as admired, is a market-friendly pragmatist in power 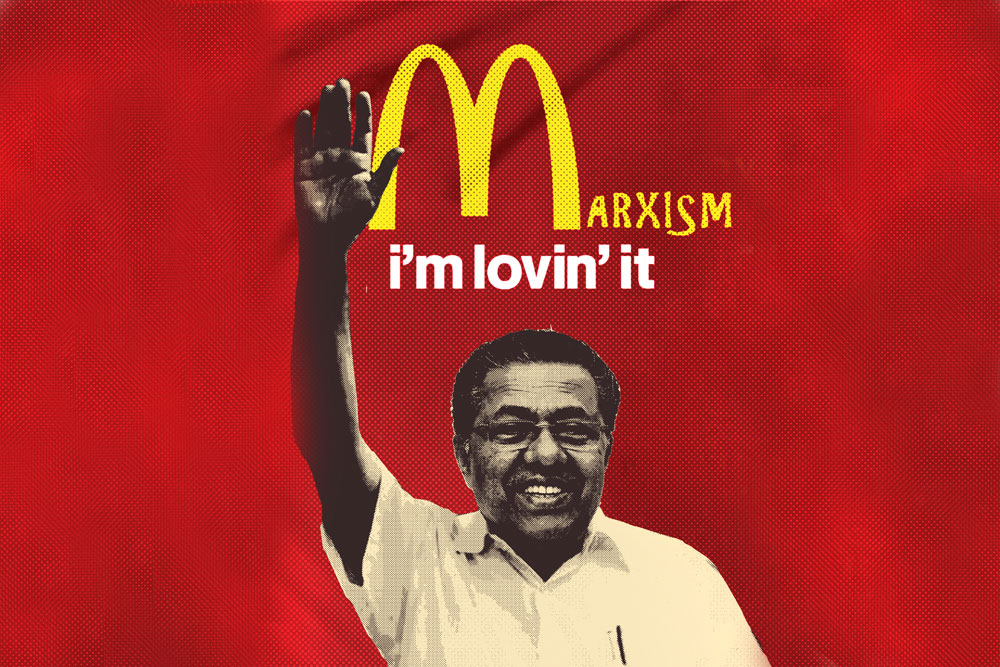 ONE MORNING DURING the Emergency, Pinarayi Vijayan, half-conscious after a night-long, brutal thrashing by cops, looked in the face of a senior police officer who had ordered the torture, and said, “Once I get better, I will take revenge on you.” The newly elected Kerala Chief Minister was then 30 and an MLA, and before he was sent to jail, his tormentors had crushed his toes with batons, besides inflicting other serious injuries. The police officer was stunned to see Vijayan’s defiance. Nearly two years later, re- elected in the 1977 polls after the Emergency was lifted, the leader made a fiery speech in the state Assembly, brandishing the blood- soaked shirt he wore that dark night and offering a damning portrayal of the Congress-led government’s actions from 1975 to 1977 that included killings, sexual abuse and forced disappearances.

Puritanical, cold and obstinate, Vijayan is a steely Marxist. Just as he is unshakeable, he is also a stickler for utmost loyalty from his comrades. His rise to the higher echelons of the CPM in Kerala and at the national level is proof of how abrasive internal politics has become within India’s biggest Left party. He has fought steep odds and numerous rivals within the Stalinist confines of his party in the state to enhance his stature and wield the power he does. He has come under attack for using fear as a tool to silence his intra-party detractors. At last year’s Visakhapatnam Party Congress of the CPM, an amendment suggested to the political resolution presented by outgoing CPM General Secretary Prakash Karat was to incorporate ‘the right to work without fear of party honchos’. Under the title ‘Tasks’ in the ‘Draft Political Resolution’, a delegate from Kerala had proposed the insertion of a paragraph to fight authoritarianism within the party, putting the spotlight on the tyrannical tactics employed by Marxist bosses such as Vijayan to quell dissent. The proposal was rejected, of course. Partymen close to Vijayan say the leadership had to adopt a fear- inducing style of work to keep the CPM in Kerala a cohesive entity in the face of fierce attacks by rivals looking to decimate it.

Vijayan, 71, is a leader who fits the mould of typical Marxists of north Malabar, his illustrious predecessors who had assiduously built the party into a well-knit organisational apparatus as well as formidable electoral force: aggressive, ruthless and—to a large extent—unforgiving. Unlike most of them, though, he isn’t charismatic yet as a politician. But there are those who hope his stint as chief minister will help alter that perception.

Veteran Kerala-based bureaucrat Babu Paul, who has worked closely with Vijayan when the latter held the crucial ministerial portfolios of electricity and cooperation between 1996 and 1998 in the Left Democratic Front (LDF) government, notes that Vijayan is hard-nosed politically. “He could be very harsh and rigid,” he says. “At the same time, he is a very flexible and effective administrator. He has proved it as a Kerala minister,” Paul adds, emphasising that “as minister, Vijayan was extremely courteous with bureaucrats, but there was no excuse for tardy implementation of projects”.

A senior Congress leader from Kannur who has known Vijayan for more than 40 years affirms that assessment. “He is a potential modernizer because he is a very pragmatic politician in government. He is stubborn as an organisation man, but very hands-on and down-to-earth while handling ministerial portfolios. That is the other side of his personality,” he points out. “Vijayan has resolved the contradiction himself,” this leader adds.

The resolution of contradictions is a hoary challenge of communist practice. The likes of Mao and Deng dealt with it using extremely different ways. While the former went the primeval way, the latter unleashed animal spirits to build a market economy steered by a totalitarian party.

Vijayan doesn’t seem interested in such debates that preoccupy Marxist theoreticians. “We are Marxists, but there is nothing wrong in enlisting the support of the private sector to generate jobs. Our aim is to take Kerala to the next level of growth and work for the people who want more jobs here. We have to meet several challenges,” the Kerala Chief Minister tells Open. His is the voice of a hard-nosed administrator that evokes the pragmatism of Deng, whose maxim, ‘It doesn’t matter whether a cat is white or black, as long as it catches mice’ had a huge impact on China. It had spawned variants, too, including ‘a socialist train coming with a delay is better than the capitalist one that comes on time’.

However, in India, the pragmatic step of taking Marxism to the market place has never been the priority of communist leaders. Industrialisation suffered badly in West Bengal, which the Left ruled from 1977 till 2011, and to an extent also in Kerala, where it has been in power for alternate terms, its political fortunes see- sawing with a Congress-led coalition in each election since 1977.

While Dr Paul expects Vijayan to outsmart even some of the most “practical and visionary” chief ministers of Kerala— C Achutha Menon and R Sankar in his view—G Vijayaraghavan, founder-CEO of Thiruvananthapuram-based Technopark, India’s largest IT park, is glad that Vijayan is keen to play “the role of a statesman, and not that of a mere politician”. As soon as he was designated the Left coalition’s Chief Minister, Vijayan made the right noises by inviting Vijayaraghavan, an ally of opposition Congress, to his swearing-in ceremony. Vijayaraghavan, who is widely credited with designing the state’s IT roadmap and had invited the wrath of a section of the CPM over his public outbursts on party veteran VS Achuthanandan, is a State Planning Board member.

Vijayaraghavan thinks Vijayan will not follow in the footsteps of Achuthanandan, who, according to Paul, was the worst Chief Minister Kerala has ever had. “He is likely to follow the route taken by another former CPM Chief Minister, EK Nayanar, who had visited—even in the face of criticism from some quarters—the US and other countries in the West to attract investment to Kerala,” Vijayaraghavan says. Vijayan himself was part of the Nayanar cabinet. Achuthanandan, Vijayan’s mentor-turned arch-rival in the party, was Chief Minister from 2006 to 2011, and has invited the displeasure of technocrats and many bureaucrats with his overly populist ways. Paul says, “Achuthanandan’s philosophy was demolition, not construction.” He is referring to his action against illegal buildings in the high ranges of Munnar which were demolished on his orders. “You have to use law and not barbarian ways. Thanks to him, the government had to later pay huge compensation to several people for the losses caused,” he adds. Vijayan, on the other hand, is a “disciplined” leader, Paul avers— which explains why he gelled well with policymakers in his preliminary meetings in Delhi, he adds.

“Vijayan did have very smooth meetings with leaders of the BJP-led Government in Delhi despite his aggressive anti-BJP and RSS posturing,” says a senior government official based in Delhi. Back in Kerala, Vijayan is perhaps the CPM leader RSS hates the most. He has been flayed for encouraging political violence in his volatile home district of Kannur, which has seen frequent clashes of murderous intensity between CPM and RSS activists since the late 1960s. Vijayan was an accused in the killing of an RSS activist, Vadikkal Ramakrishnan, who had often terrorised beedi workers belonging to the CPM at the behest of their owners and other rich traders from neighbouring Karnataka. The case was later rejected; yet the RSS never misses any opportunity to bring up the martyrdom of Ramakrishnan and that Vijayan was an accused in that case. The RSS is wont to hit out at the CPM for using violence against other political parties in its stronghold of Kannur. A high-level delegation comprising Union ministers from the BJP and Kerala RSS leaders had met President Pranab Mukherjee after Vijayan was named Chief Minister, requesting him to rein in the CPM in northern Kerala. Their contention was that the grassroots-level workers of the CPM were emboldened by his elevation and were launching attacks on political adversaries.

The CPM counters all this, saying the RSS is bent upon wrecking communal harmony in the region and provoking violence. More CPM men have died in the decades-long political violence than from any other party in this north Malabar district.

DESPITE HIS IMAGE of being an RSS baiter, Vijayan had “fruitful” talks with leaders of the ruling coalition at the Centre because he sounded practical and in favour of growth, says a person close to the matter. During his meeting with Finance Minister Arun Jaitley at the latter’s residence, Vijayan was in agreement with many of the BJP leader’s concerns and suggestions, including on GST and enhancing Kerala’s tourism sector. At that meeting, Vijayan was also open to the idea of throwing open the ‘building and maintenance’ of proposed railway corridors to private players, quite a departure for a Marxist leader. Vijayan famously got along with Prime Minister Narendra Modi, who dwelt at length on ways to boost Kerala’s economy and revenues. Later, at his press conference, the Chief Minister was vocal about the words of encouragement from NDA leaders. “Vijayan was jubilant at these meetings. He connected very well with these leaders. They understood each other. This is not often the case when leaders from Kerala come to meet the Prime Minister and Finance Minister. There would be very little to talk about. In this case, both had common subjects to [discuss]. The Chief Minister had come prepared and impressed upon NDA heavyweights [the need] to help with Kerala’s development,” a Delhi-based bureaucrat says.

Vijayan has stated he is committed to building more roads and creating more jobs for everyone—from the highly skilled to skilled and unskilled. He is always contemplating ways to handle reverse migration from the Gulf. He also met a few corporate chiefs soon after he was sworn in, to request their help. Says Kris Gopalakrishnan, co-founder and former chairman of Infosys, who met him: “The Chief Minister was talking about his priorities—job creation, expanding entrepreneurship, improving school education, etcetera. He wanted to know how I could help.” Gopalakrishnan, however, doesn’t go into the details of what he expects to do in Kerala, saying “these discussions are confidential”. Some of the businessmen who met Vijayan have told Open that they were impressed by his warmth and ideas. “He is extremely suave and well-mannered, contrary to reports in the media,” says one of them.

For Vijayan, the perpetually short-tempered CPM leader who is averse to more intra-party democracy, that is indeed a makeover. Looks like a case of the famed polarity between a Marxist on the Street and a Marxist inside the party office.