One Year after Kishenji…

…a look at the gains and losses of the CPI (Maoist) 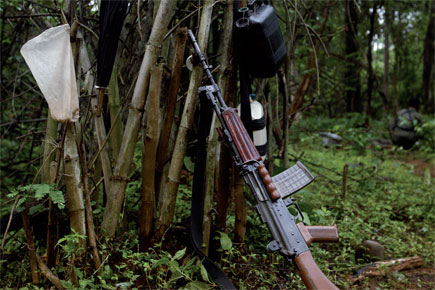 …a look at the gains and losses of the CPI (Maoist)


The first death anniversary of the senior Maoist leader Mallojula Koteshwara Rao (Kishenji), killed in an encounter with security forces on 24 November in West Bengal last year, passed off peacefully. Intelligence agencies had sounded an alert that Maoists might launch big attacks around this time in their area of influence. No such thing has happened so far. But this is no indication that their days are over, as many within India’s security apparatus would like us to believe. In many areas, Maoists are silently regrouping, and in some they have staged a comeback.

In August last year, the Centre had declared Saranda forest in Jharkhand’s West Singhbhum area ‘Maoist free’. In December that year, the Centre announced its Saranda Development Plan (SDP), a Rs 260 crore package for the development of 56 villages freed of Maoists. But recent developments indicate that Maoists have gradually returned and are capable of inflicting damage. On 25 November, a large Maoist squad set fire to construction equipment used in building a road under the SDP in Ushariya village. Before slipping away, they warned the workers not to work for the Government.

In Maharashtra’s Gadchiroli district, a large part of which is a Maoist bastion, over a hundred elected village heads have resigned in the last few months. Maoists have been targeting them, and on the night of 20 November, they killed a deputy village head in the district’s Sironcha tehsil. The fear of Maoists runs so deep that of the 225 gram panchayats that went for by-elections recently, no nominations were filed for 172 of them. This year, the Government has been trying hard to create a wedge between tribal and non-tribal Maoist cadres in Gadchiroli. But it has not led to any significant success so far.

In West Bengal as well, Maoists are hoping for a resurgence. They have recently appointed a senior Maoist leader, Katakam Sudarshan (Anand), as Kishenji’s replacement for its eastern bureau. Sudarshan is believed to be quite experienced in guerilla warfare; it’s he who had planned the 2010 Chhattisgarh ambush in which 76 security personnel lost their lives. Maoists have suffered irreversible losses in the state, including Kishenji’s death. In fact, it is now established that Kishenji’s whereabouts were passed on to the security agencies by a Maoist commander who had been close to Kishenji. Maoists are relying on Sudarshan’s experience to begin recruiting new cadre in this area, especially along the West Bengal-Jharkhand border.

After the military offensive in their Chhattisgarh bastion of Abujhmaad in March this year, Maoists are keen to create new liberated zones elsewhere. For years, Abujhmaad had been a safe sanctuary for their topmost leaders. But now, they are looking at other options since they are no longer sure of Abujhmaad’s impenetrability. Recent reports have suggested that a senior member of their politburo, Malla Raja Reddy, has been appointed the head of a newly established Chhattisgarh-Orissa Border (COB) committee. Reddy was arrested from Andhra Pradesh in December 2007, and two years later, he was released on bail on account of poor health. He jumped bail and rejoined the Maoists. Through the COB committee, Maoists are hoping to corner their former commander Sabyasachi Panda who fell out with the leadership. Panda, who hails from Odisha, holds power in a few districts in his home state. A few months ago, he resigned from the CPI (Maoist), after a rift was created between him and the Maoist Andhra-Orissa Border (AOB) committee headed by a senior Telugu commander, Modem Balakrishna. Panda later resigned and formed his own party. He later wrote an open letter to the Maoist supreme commander, Ganapathi, in which he accused the Maoist leadership of being driven by Telugu interests and ignoring the aspirations of non-Telugu cadre, especially those from Odisha. Panda has been a crucial cog in the Maoist wheel, not only in Odisha but elsewhere as well. He has been instrumental in ensuring a supply of explosives to Maoists. Panda is now looking at surrender since even his erstwhile comrades want to hunt him down.

Much of their future strategy, intelligence sources say, would depend on their next ‘congress’, which they have been planning to hold for some time but haven’t been able to in the face of an enhanced military offensive against them. Their last congress was held in early 2007.