Once upon a Place

The police orders are to ‘flush out’ Maoists, and since actual militiamen are hard to locate the State forces end up treating every villager as a closet Maoist. It all adds up to further alienation 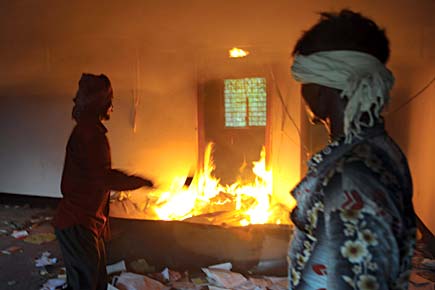 As security personnel inch forward in Lalgarh and the Maoists retreat, villagers are left behind to face the rough end of the stick


Every fire starts from the belly, says Ranjit Mahato. Sitting on a string cot, occasionally caressing his bandaged leg, Mahato awaits police fury. There is just a large tree and one order between him and the police. A day before, security personnel have liberated the Lalgarh police station. Now they wait for the command to move forward. Beyond this, they dare not go. Two kilometres ahead, the road has been closed by a tree felled by Maoists. Their leaders had been camping in this area, monitoring the agitation. They have moved ahead. But Ranjit Mahato cannot go anywhere. Where does one go, leaving one’s home behind, he mumbles. But it is only to himself that he talks.

A month ago, Mahato was seriously injured while escaping from the police who fired at a group of people in the Jhitka forest near his village. The people were planning their next course of action. Lalgarh was virtually cut off from the rest of West Bengal after angry villagers cut off roads to protest police excesses against tribals. On 2 November 2008, Chief Minister Buddhadeb Bhattacharjee had narrowly survived a landmine blast near Lalgarh. Police action followed, and that’s what provoked the Lalgarh agitation, an eruption that’s still spewing lava-hot rage. But Mahato says embers had been glowing and flickering for quite a while—in people’s bellies. For more than three decades, Lalgarh had been a CPM bastion. In the neat and tidy tribal houses, the CPM flag shared space with their deities. “We were all CPM,” Mahato says, of the not-too-distant past.

But over the years, life’s become tougher in the area. In most villages, there’s no electricity. The local CPM leaders would distribute cards meant for people living below the poverty line only among a chosen few—their friends and relatives. At the ration shop, the Rs 2 per kg rice would be an aspirational purchase. Mahato and many others like him would have no access to it. “We were forced to buy the same rice for Rs 7, and it was scarcely available at the shop,” Mahato says. Job cards of the rural employment guarantee scheme (NREGS) did exist. But not the work.

Many went hungry. And then, villagers started noticing a few unknown men around the place. They would just hang around, occasionally asking people if they needed anything. They would ferry sick villagers to the town, and follow up a few days later with offers of free medicine and monetary help. They made no demands in return, except the odd request to help cook a bag of rice which they would bring with them.

For the last Panchayat election in May 2008, insecure CPM leaders began clamping down on villages in Lalgarh. They forcibly asked locals to nominate CPM leaders. “One night, CPM workers came with police. They said, ‘CPM supporters stand towards the left and others to the right’. Those at the right were all taken away,” says Mahato. In the Lalgarh block, 70 people were arrested. Meanwhile, the unknown men would pay visits to the weekly haat in the village, now with rifles slung on their shoulders. One of them would talk of how tribals were being exploited, and how politicians were getting richer. “People would listen to them,” says Mahato.

In November 2008, by the time the police swung into action after the attack on Bhattacharjee, Lalgarh had turned into a Maoist stronghold. As the police deserted their positions there, Maoists took over. “They encouraged us to fight with whatever was in our possession,” says a villager. In various villages, Maoist militia would knock at night, asking people to join them. “They knocked at my door, and said they wanted my help in transporting weapons and other supplies,” says another villager.

Such interactions have not proved harmless. In recent days, as security personnel inched forward in Lalgarh, Maoists have retreated deeper, leaving villagers behind to face the hard end of the stick. As the police and central security forces swooped upon village after village, people have been put to torture and other forms of brutality, accused as they stood of being Maoist supporters.

The police orders are to ‘flush out’ Maoists, and since actual militiamen are hard to locate—given to guerilla tactics, they avoid direct encounters—the State forces end up treating every villager as a closet Maoist. It all adds up to further alienation.

What happened in Kuldiha village is particularly unedifying. First, the police beat up 45-year-old Vijay Mahato. Then, they let their batons loose on the rest, sparing none, not even an 80-year-old woman who was dragged by her hair by a policeman. They vandalised everything. Two motorcycles were wrecked and thrown into the village pond. A jackfruit tree was destroyed. “One of them ordered me to raise my hands, and the other started beating me up,” says Vijay. Before leaving, the policemen took away his radio and torch. Shortly afterwards, the entire village fled for shelter in a nearby school. Vijay and his family stayed back to tend to their cows. Many young men were picked up for ‘questioning’.

Lalgarh is speckled with ghost villages, with not a soul in sight. To be spotted, Ranjit Mahato knows, is to be shorn of all human dignity. To stay is to tempt fate in all the brutality it has in store. In Kamarpara village, an old man is the only one left. He curls up the moment he sees us reach the village. “I have done nothing,” he cowers. The tremble in his voice speaks volumes. Though he does not reveal anything, other villagers camping in the school speak of the horrors they have seen. In another nearby village, Janardhan Mahato watched helplessly as policemen beat up his son, and as his daughter-in-law was kicked violently away for the temerity of falling at a policeman’s feet. The blow knocked her unconscious, but a policewoman kept hitting her senseless body.

All schools in Lalgarh are closed. Some of them have been taken over by the police. There’s one in Pirakata which houses refugees now. They escaped the tyranny, but only just. Hear Tarun out. He’d begun his trudge to safety at dawn, after CPM workers beat up many of his co-villagers the night before. But Tarun, like many others, fled in fear of another round of thrashings by the police. With shops shut, food has been hard to come by. “God only knows how we have survived all these days,” he says on the way to Midnapore town with his wife, three children, some utensils, a change of clothes and their most prized possession—a packet of Britannia Tiger biscuits. Midnapore is about 40 km from their village. It threatens to be a long walk in the heat.

The heat is oppressive, as a gaggle of journalists can attest, as they wait in Bhimpur near Lalgarh police station for the police to make their next move. A hen flutters around, stopping, every now and then, on one leg. There is nothing to do except wait. The security men are equipped with nothing except their weapons. Some have dirty water bottles strung to their belts.

A few stretches secured earlier by the police have been mobbed by angry villagers backed by Maoists. A few armed Maoists have been spotted nearby. Some journalists and a police party rush towards a confrontation developing there. From huts nearby, tribals raise traditional battlecries to scare the policemen. “Doesn’t it look as if they are fighting the British?” asks a photographer.

Five minutes after the media personnel leave for Midnapore, their base camp, there is a landmine blast. Two policemen are injured. Deep in the forest, Cobra Special Forces are hunting for Maoists. But the senior cadre are nowhere to be found. From his hideout, Comrade Kishenji, their second-in-command, is readying the Maoist bulletin, taking breaks for phone interviews to news channels. The day police storm into Lalgarh town, Kishenji has suffused national airwaves. That morning, newspapers have quoted the founder of the Naxalbari uprising, Kanu Sanyal as saying that Lalgarh is not a communist movement. Kishenji thunders back, his mellow voice turning hard for a while. “Kanu Sanyal is a pheriwala, a hawker for the CPM,” he says. “If you have further questions, please call me in the morning.” It is already way past midnight.

Colonypara village is just behind Lalgarh police station, a small cluster of about 20 houses. There is no electricity, and the only source of water is a lone hand pump. Manju Sen has a NREGS job card, and she got work for three days last year. But she didn’t receive a paisa for it. A month ago, a local Trinamool leader came to her house and took the card away. “I have not seen it since,” she says. “At least they could have paid for three days.”

The heat has intensified. The temperature hovers around 40 degrees Celsius, but the relative humidity is about 90 per cent. On both sides of the thin stretch of road leading to Lalgarh, there is a dense jungle of Sal trees. The police and paramilitary jawans sit on both sides, taking positions against an enemy they cannot see. They have no clarity about the operation. “We are not doing anything except wait in this dense jungle, and that is killing us,” complains a jawan.

But it is not the wait or Maoists that killed Nabakanta Roy, a jawan of the Central Reserve Police. It was the Union of India. In the absence of any basic facilities like water, he died of a heat stroke. About 50 soldiers have been laid low by dehydration in Lalgarh, one of whom we offered glucose water and a lift in our vehicle. He had been walking for miles with a heavy bag of explosives, a bullet proof jacket and two rifles, and without access to drinking water. He collapsed just outside Lalgarh police station.

Sitting with his back against a tree, a CRP jawan waits for food to arrive. A fellow soldier has gone searching for water. “There is no action,” he says, “and this heat is killing me.” There is a pause, and in the silence of the Jhitka jungle, I think I hear his stomach rumble.

He looks at me. His voice is unsoldierly. “I cannot fight when I am hungry.”

Some fires die in the belly.