Omar Is Selling Kashmiris a Dud

His rhetoric on the withdrawal of AFSPA just doesn’t wash 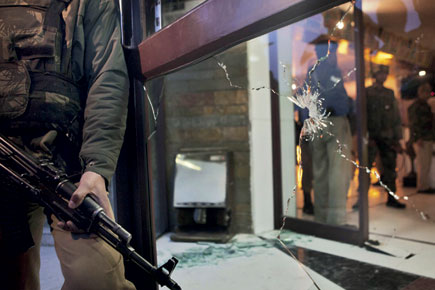 His rhetoric on the withdrawal of AFSPA just doesn’t wash


Nobody in Kashmir is as optimistic as its Chief Minister, Omar Abdullah. While speaking at a police function in Srinagar on 21 October, Omar said what he has said at least a dozen times before: his government had made progress with the partial lifting of the controversial Armed Forces Special Powers Act (AFSPA). This is just two days after suspected Lashkar terrorists stormed into a hotel and killed two hotel employees.

To be fair, the situation in Kashmir has improved dramatically. The last summer was totally peaceful, with a record number of tourists visiting the Valley. Although intelligence reports say dozens of militant camps are still active in Pakistan and at least 2,000 Kashmiri youth are still believed to have links with militancy, the state police are quite capable of handling the situation. But Omar should keep his optimism in check, for it has time and again caused him embarrassment.

Not long ago, he made a public announcement that AFSPA was about to be revoked from certain areas in the Valley. Of course, no such thing happened. It is clear the Centre is not willing at this juncture to relax the provisions of AFSPA in Kashmir. A few days before Omar’s statement, Union Home Minister Sushil Kumar Shinde paid a visit to Kashmir, where he chaired security review meetings and later made clear that the Army was going to stay. “When I was in Jammu & Kashmir, locals asked me to [withdraw] the Army from the Valley, but I told them that we cannot do it till the situation is peaceful,” he told reporters.

Sources reveal that during their presentation to Shinde, security agencies said the threat from Pakistan-trained terrorists was still high and that they could not afford at this point to move the Army out from any area in Kashmir. He was also briefed about the recent targeting of Panchayat functionaries. This brief later reflected in what Shinde told reporters. He said Pakistan was still helping terrorists infiltrate Indian territory.

Omar Abdullah chose to ignore these developments and reiterated what his party has been saying for a long time now. Political observers say it is not that the Chief Minister is unaware of New Delhi’s stand on the deployment of the Army and the lifting of AFSPA. But, like a recent editorial in Kashmir Times rightly observed: ‘This trait [of talking about AFSPA] has been a favourite weapon in the political armoury of the National Conference leadership. It was tested for over two decades in the name of the ‘plebiscite’ (rai shumari karao) till it was finally dumped in exchange for power.’

Omar must realise that he cannot keep flogging the same horse when people know very well that he has no say in these matters and that such policies are decided at the Centre. By insisting on selling a non-deal to his people, he is only handing over ammunition to his opponents.