It’s been ten years. A lot has changed. And a lot has remained the same. I have much more grey in my hair. Vikram is as youthful as ever. Time cannot touch him 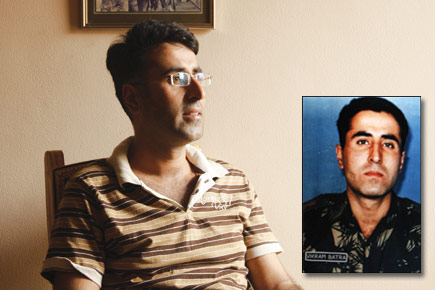 I have much more grey in my hair. Vikram is as youthful as ever. Time cannot touch him


When I talk about Luv, I don’t know where to begin. Capt. Vikram Batra PVC (posthumous) is Luv, and I, his younger twin, Kush. His identical twin. Ours was a childhood spent in the hills of Palampur making the most of our identical looks—playing pranks, filling in for each other and at times even getting punished for one another’s mistakes. The similarity ran deeper than looks. We also had the same interests. Both of us started playing table tennis at the age of ten. It’s another story that Vikram went on to become the school champion for five consecutive years. But I’d like to believe that I had a big hand in that. After all, I chose to lose to him in the semi-finals in the fifth year so that he could make the school record. But deep in my heart, I know that my brother—Shershah of Kargil—was a winner right from the start.

Shershah of Kargil. That’s what the enemy too called Vikram. That’s the mark he made on them on those unforgiving mountains of Kargil. I don’t know at what stage Vikram marched on way ahead of all of us. We’d grown up as regular kids, making our choices as we went along. The first different choice that I remember is when our father started giving us Rs 50 a month for the school bus fare. I chose to travel to school by bus. Vikram opted to walk it and instead spend those rupees in the canteen. As we grew up, Vikram opted for the Army, and I, rejected thrice by the Services Selection Board, settled for business administration. How thrilled he was when he made it to the Indian Military Academy (IMA), Dehradun.

It was 6 December 1997. Vikram Batra’s dream came true. He took the oath as an Officer of the Indian Army:

Mom and Dad pinned up the stars on his shoulder. He stood there smiling from ear to ear in his crew cut and several kilos thinner after the rigorous training. It was a grand moment. But it wasn’t going to be an easy life and Vikram knew that.

When he’d come home on annual leave, we would talk for hours about the challenges he faced in Sopore—the strife-torn town in Jammu & Kashmir’s Baramulla district—which was his first posting. He had been commissioned into 13 JAK Rif.

We would dream of the day he would command his regiment and I would get a chance to attend some of the regimental functions with his family and children. That dream is lost now.

Never could I have imagined, even in my wildest dreams, that the stories we saw in the famous TV serial, Param Vir Chakra, which we watched at a neighbour’s house in 1985 (we didn’t have a TV at home back then) would one day become so real for me. And Vikram would be the hero. Vikram was awarded the country’s highest gallantry award, posthumously. He was only 24. His famous words from the height of 18,000 feet: “Yeh Dil Maange More,” after victory over the enemy, still ring in my ears.

It’s been ten years. A lot has changed. And a lot has remained the same. I have many more grey strands in my hair. Vikram is as youthful as ever. Time cannot touch him. In these last ten years, I have longed to visit those mountains that he conquered. And then suddenly, out of the blue, I got a call to travel to Kargil and Drass. It was as if Vikram was calling me to have a chat with him. I didn’t look back, packed my bags and set out to meet him.

I landed in Leh at 10:30 in the morning on 2 July, five days before Vikram’s tenth death anniversary. The valley was more beautiful than it is made out to be in books. From the snow-capped hills surrounding it, I could almost sense Vikram looking at me. I then began the road trip to Drass to meet him. The mountain wind blew faster than the speed of the car and in my mind there was just one picture—of the bearded young man who had become a legend for pushing the enemy back at insurmountable heights where even life does not exist.

A little outside Leh, we reached Gurdwara Pathar Sahib. I said a prayer for Vikram and for all those great soldiers guarding those mountains and our motherland. I recalled what Vikram had written in one of his last letters before the attack: ‘Life is at total risk. Anything can happen here. Take care of yourself and Mom and Dad… My picture has appeared in The Times Of India. Keep a copy for me. I want to see it once I’m back.’ The picture had appeared on the front page of The Times of India on 2 July 1999. It showed him standing with an anti-aircraft gun and weapons he had captured from Pakistani soldiers. This was after the first ferocious attack on Peak 5140 launched after they performed pooja at the Ghumri Base Camp with the call of “Durga Mata Ki Jai”.

Vikram and his men captured point 5140 on 20 June 1999, and two weeks later, when his company launched the attack on point 4875 on 5 July, Vikram was fatally wounded—hit by sniper fire. The company captured the peak, but after 11 casualties. Vikram was one of them.

It was months later, at the Western Command headquarters, when I met the junior commissioned officer (JCO) who was with Vikram the day he was fatally wounded. He was the last man to speak with Vikram. Sub Major Raghunath Singh started wailing when he saw me. He solved the mystery of my twin’s death for me: a young officer, Vikram’s junior, was hit and crying for help. The JCO wanted to go out to help but Vikram stopped him. “The enemy was firing heavily. ‘You have a family and children back home, I will do this,’ saahab said. He stopped me with these words and went out,” Raghunath Singh told me as he wept like a baby, inconsolably. But Vikram was hit by sniper fire. Having realised that, the charged company went berserk, mad with rage at their leader being hit, and killed the enemy soldiers. The tricolour was planted atop point 4875—they call it Batra Top now. Vikram reached Palampur before the sun rose on 11 July 1999. He was wrapped in the tricolour, lying calm almost as if he was trying to catch up on sleep he had lost during these arduous assaults on those treacherous peaks.

Was I really so close to those peaks that I could almost see him fighting there? I wanted to reach up there as fast as possible, but the track was treacherous—the rocky mountain on one side and the sheer fall on the other. In some time, we had left the Indus River behind.

It was a breathtaking journey. A place so beautiful and yet caught in the crossfire of war a decade ago. Midway, at one of the military posts, we had lunch with the commanding officer of 4 JAK Rif. I also met an officer six months senior to Vikram—now a major—and a JCO, both of whom had fought the war together with Vikram. “You look so much like Vikram Sir,” the JCO said and hugged me. I’ve been told that a billion times in the last ten years. There are people now who know me as Captain Vikram Batra’s brother. Many of them even walk into my office at ICICI Bank in Delhi and stare at me as if they know me. Some of them even say, “We’ve seen you somewhere.” When I tell them I’m Captain Batra’s twin, they say, “Oh, ‘Yeh Dil Mange More,’” and shake my hand.

My dream of visiting Vikram as a commanding officer of a regiment couldn’t come true. But Vikram still commands. He’s there in the hearts of the soldiers posted in Kargil and Drass. In that mountain named after him (the Batra Top). And in the transit camp in Drass, called Capt Batra Transit Camp, where weary soldiers break their journey in the call of duty.
‘Call of duty’, the mention of these words takes me back to the days he was to be commissioned as an officer. When he was in the IMA, the footnote of Vikram’s letter pad read, ‘If Death comes to me before I prove my blood, I promise I’ll kill Death.’ You kept your word, Vikram. My Brother, My Twin, I salute you.