More Marxist Than Thou

If you think Prakash Karat would be lying low after his party’s recent rout, think again. He’s back at the helm with a grand plan for change 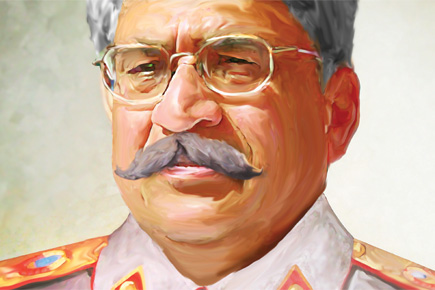 If you think Prakash Karat would be lying low, think again. He’s back at the helm with a grand plan for change.


What’s on Prakash Karat’s mind? The answer may not give the Prime Minister sleepless nights anymore, but nor, after the General Election of 2009, is it just a matter of academic curiosity now. As general secretary of the Communist Party of India-Marxist (CPM), Prakash Karat still leads the Left in a country of mass deprivation where even centrist parties see electoral logic in swerving leftwards every now and then.

Under criticism for his ‘Third Front adventurism’ in the run-up to the recent Lok Sabha polls that many CPM members believe paved the way for the Congress-Trinamool alliance against the Left Front in West Bengal, Prakash Karat ought to be softening his political stance, you might think. There’s nothing of the sort to report. Rather, he seems all set to embark on a massive exercise to consolidate his position, corner his detractors, and emphasise the doctrinal ‘M’ part of the CPM.

The exercise, that every leader of significance in the party is aware of but unwilling to talk about openly, involves shifting the party to a puritanical position—a shift that suits Prakash Karat more than CPM leaders who contest elections. For, despite all his political blunders and loss of voice in the Lok Sabha, the general secretary has a Teflon coat in his ideological commitment, and the party’s rank and file know this only too well.

Sources say the plan is to rigorously implement the party’s ‘rectification document’. This would then be followed by preparations for an early party congress, the objective of which is to keep the central leadership intact while revamping the state units, particularly in West Bengal and Kerala. This way, the Politburo would get a bigger say in these units by the time the two states go to polls in April-May 2011.

The rectification document, which is to be given final touches by the Politburo in its next meeting on 11 October, is aimed at ridding the party of all ‘bourgeois deviations and traits’ by putting in place a mechanism to intervene when CPM members violate party diktats. The CPM leadership expects to turn the document into a tool to enforce its authority once it is approved by the central committee, scheduled to meet on 23-25 October for the purpose.

“For Karat,” says a senior CPM leader, “this is just the right time to start a counter offensive against his detractors, most of whom are paralysed after their initial outburst against him for poll debacles in West Bengal and Kerala.” Ever since the CPM’s rout in the 2009 Lok Sabha election, West Bengal Chief Minister Buddhadeb Bhattacharjee and a section of the state’s party leaders have been blaming Karat for the mess. They have been pointing fingers at such Politburo decisions as sacking long-time member Somnath Chatterjee, hobnobbing with Bahujan Samaj Party (BSP) leader Mayawati, and above all, withdrawing support to the United Progressive Alliance (UPA) Government at the Centre over the Indo-US Nuclear Deal.

Prakash Karat, on his part, is learnt to have held West Bengal’s state leadership responsible for the poll reverses, pointing to the disastrous attempts at land acquisition for its industrialisation overdrive. The rift between him and Buddhadeb Bhattacharjee has widened since the election results. This, say observers, is the main reason for the latter’s absence from Politburo meetings since then—in Delhi.

West Bengal is not the only sore point. In Kerala, another CPM stronghold, the party is wracked by infighting between Chief Minister VS Achuthanandan and party secretary Pinarayi Vijayan. In both states, dealing with corruption has become a major challenge for the central leadership.

“The rectification document’s proper enforcement is important for Karat,” says a CPM central committee member, “This is the only way he can reassert the general secretary’s authority and give a new image to the party by the time the next party congress is held.” It was the central committee, constituted by the last party congress in April 2008 at Coimbatore, that elected Prakash Karat as general secretary for a second term. But CPM watchers have detected murmurs about the next party congress (held every three years), which is due in April 2011, around the same time as Assembly polls in West Bengal and Kerala. Whether the congress should be held before or after these polls is a rivetting debate within the party right now. Although the CPM is yet to announce the party congress schedule, sources say it is more or less decided that it will be held either in December 2010 or January 2011. Prakash Karat is said to be in favour of an early party congress.

According to sources, the purge of ‘bourgeois traits’ could kick off by November, soon after it is approved by the central committee. By the time it picks up, preparations for the next party congress will have begun, starting with branch conferences in April-May, to be followed by district and state conferences before December 2010. The CPM would thus be ready to hold the all-India party congress by the end of January 2011.

Insiders say the success of Prakash Karat’s strategy depends on the document. The back-to-basics campaign has been a rising rumble. In its Coimbatore congress, the CPM had pointed out that a ‘bourgeois lifestyle’ and ‘alien class values’ had infiltrated the party. Corruption was seen as one of the ill effects. In another report, the CPM noted, ‘There are also complaints that the assets of certain party members are disproportionate to their known sources of income.’

“The previous rectification document of 1996 could not yield the desired results as it could not be implemented in the manner it should have been,” says a CPM leader, “It is because of this that corrupt practices by some of our party members could not get weeded out in time.” The contents of that document, which filtered down to every level of the party, had cautioned CPM cadres and leaders against such ‘vices’ as parliamentary ambition, corruption, extravagant lifestyles, lavish weddings and dowry, and advised them to ‘not organise religious ceremonies or personally conduct religious rituals’ for good Marxist measure. Party leaders were also asked to refrain from accepting any hospitality or gifts (not even hotel stays) from private lobbies, and barred from the misuse of official cars and other facilities by family members and friends.

The latest document clamps down even harder. The no-no list is said to range from factionalism and ideological degeneration to corruption and the love of lucre. This campaign would not just be an attempt by the CPM general secretary to burnish his own credentials vis-à-vis the party cadre, but also a vehicle to leave his critics in the dust as he pursues a path of puritan revivalism.

By the sound of it, party members are gung-ho about it. Says another CPM central committee member: “While a rectification campaign will improve the party’s image and bridge gaps between the party cadre and masses, the massive mobilisation in the run-up to the next party congress will generate a momentum that could be harnessed in favour of the party in the 2011 Assembly elections.”

When in trouble, a retreat to one’s home base is the natural instinct of virtually every political formation. Seen that way, the CPM’s latest efforts are no big surprise, perhaps.

But the real question is whether its leadership can take the campaign to its logical conclusion—and where that leaves the party in big picture politics. Can it ever again hope to exert influence on India’s national policies?