The agony of Shivaji Park residents 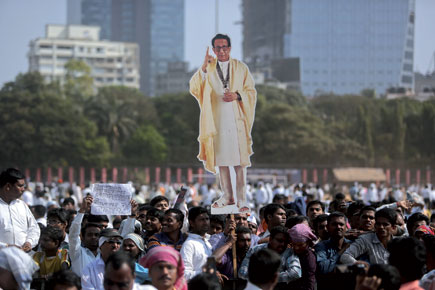 The agony of Shivaji Park residents


MUMBAI ~ The war of memorials has begun. It is Dalits versus Shiv Sainiks, and both versus the Shivaji Park Residents’ Association. The iconic Shivaji Park in Mumbai has been in the eye of a political storm since the day Shiv Sena Chief Bal Thackeray was cremated there. For a man who was vehemently opposed to the erection of statues of political leaders, there is irony in his own followers’ conch call for a memorial built in his honour at Shivaji Park.
Those who live in the neighbourhood are up in arms against the move. They have categorically said that such a memorial must not be allowed on these grounds, host to dozens of cricket matches, sundry exercisers and casual walkers. The locality, not far from Dadar beach, is home not just to Shiv Sena Bhavan but also Maharashtrian leaders like Raj Thackeray, nephew of the late Sena chief and president of the MNS. Yet, those who want a memorial there appear outnumbered by those who do not.

As a pre-emptive measure to fend off opposition to their plan, some Shiv Sainiks, egged on by senior party leader Manohar Joshi, have already put up a makeshift memorial at the site of the late leader’s pyre. The Brihanmumbai Municipal Corporation (BMC) has duly sent the Sena a notice demanding that it be dismantled immediately. The party holds power in the BMC, however, and Sainiks are refusing to budge. They have begun guarding the temporary structure, signalling the stiff resistance they will offer any attempt to take it down.

Residents in the area, meanwhile, say they will appeal to the Judiciary to keep the park free of such an encroachment. “Balasaheb was a great cricket lover and he would never have wanted such an iconic cricketing ground to be used for his memorial,” says a resident, “Manohar Joshi owns Kohinoor Mills, which is near Shiv Sena Bhavan, so why doesn’t he build it there? Besides they can set up a memorial at the Sena Bhavan.” If the party insists on the currently proposed site, “we will go to court” says the resident, who does not want to be identified. “All residents are together on this, so we do not want just one of our names [publicised], as that person will be harassed by Sainiks.”

The late leader’s son and successor Uddhav Thackeray, who is also executive president of the Shiv Sena, has not taken a stance on the issue, saying that the memorial decision is a matter for Sainiks and the BMC to sort out and that he will not intervene in such an emotional issue. Interestingly, the idea of a memorial at Shivaji Park was first floated by Joshi, a real estate developer with large holdings in and around Dadar. The 2009 Lok Sabha polls saw Joshi, a former Lok Sabha Speaker, defeated in this constituency at least partly because Dadar residents were angry with his redevelopment plans. When he bought the Kohinoor Mills estate along with Raj Thackeray to build an upscale mall, he was jeered by residents here—as mill workers had not been given their dues by mill owners. Raj later exited the project at a whopping profit.

Joshi’s insistence on a memorial at Shivaji Park is seen as a move to win back lost confidence among Sainiks, but it seems to have backfired on him. Interestingly, senior Sena leaders such as Joshi and Sanjay Raut who are leading the demand have a strained relationship with Uddhav. It may just be a matter of time before they find themselves completely out of favour.

On the other side of the political divide, the state’s Congress Chief Minister Prithviraj Chavan is making efforts to get the Centre’s set of sanctions to take over Indu Mills’ land in Dadar—close to Shivaji Park—for the erection of a memorial to Babasaheb Ambedkar. Thus has the war of memorials begun. Indu Mills is located right next to Chaitayabhoomi, where Ambedkar was cremated, and Dalits have long demanded it as a commemorative space. Every year on 6 December, large crowds of Dalits, Buddhists, Neo-Buddhists and others converge at Chaitayabhoomi to mark the Dalit leader’s death anniversary.
“If the state government is keen on erecting a memorial for Babasaheb Ambedkar on Indu Mills land, then why not a memorial for Balasaheb at Shivaji Park?” Raut has asked, addressing the media. Sainiks have also started equating the spot where Thackeray’s pyre was lit with Ayodhya’s Ramjanmabhoomi. Sainiks who guard the site say that they are ready to resort to violence to ensure that Thackeray’s memorial comes up exactly there. “Balasaheb was our daivat (god),” says a Sainik, “If Dalits can have their Chaityabhoomi, we want our Ramjanmabhoomi at this spot. We will deal with those who oppose us in Shiv Sena style.”

Shivaji Park residents say they are fed up with the commotion caused by the annual Chaityabhoomi gathering. Parts of the locality even end up being used as an “open toilet” by many of those who swarm the neighbourhood. If a Thackeray memorial comes up in the park, they fear, their peace of mind would have even less of a chance.