Linguist in a POTA Court

When terror confessions are put to expert scrutiny 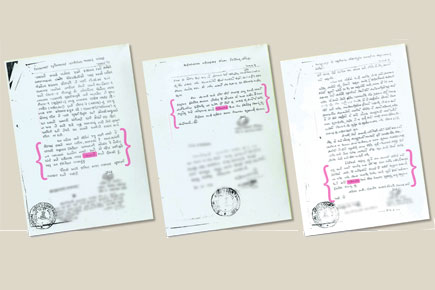 When terror confessions are put to expert scrutiny


When I agreed to assist the defence in the Tiffin Bomb Trial in Ahmedabad by analysing confession statements of the accused, my brief was simple: to convince the POTA Court in Ahmedabad that the confessions could not have been obtained the way the police were claiming. I was to refute the police contention that they were verbatim depositions given freely and written down in real time.

Suspects arrested in India often sign confession statements which they later deny in court, saying that they had signed them under duress. But in a POTA case, they cannot. However, there is nothing in the law that stops an expert witness from seeking to discredit confessions.

My interest in recording and transcribing verbal testimony goes back to the first project I did after finishing my doctorate, a study of the language spoken by rural Indians in Trinidad, West Indies, as a case of language death. Unable to elicit translations from old Bhojpuri speakers, I had to simply let them talk and then transcribe the tapes later to see what I could find in them. And what the data suggested was a way of comparing the testimony of different speakers by reducing their speech to a list of linguistic features that could be counted. I could look for patterns of grammatical errors, the incidence of peculiarly Indic grammatical structures that a non-native speaker might avoid using, and measure each person’s speed of speech.

When I turned my attention to analysing POTA confessions later in India, it was these last two approaches that turned out to be the most useful: transforming speech data into numerical scores, and clocking speed.

The information I was given at the time of the trial was minimal: the boys were accused of having planted bombs around Ahmedabad in 2002, bombs packed in steel tiffin cases. Much later, I learnt that the case had been closed soon after the blasts, as there were no leads. Then, after the assassination of former Gujarat Home Minister Haren Pandya the following year, the case was suddenly reopened and 18 boys were arrested and charged under POTA with having planted the bombs. In the case of some boys, the police had obtained signed testimonies from witnesses. But for most of the boys, the only thing that implicated them at all in this case was their signed confessions.

The confessional statements of the Tiffin Trial accused were handwritten in longhand Gujarati. To get a sense of a normal testimony and transcription in Gujarati, I arranged for two boys from backgrounds similar to the accused to speak at length, and videotaped the sessions, keeping both the speaker and transcriber in the same frame. The boys were simply asked to speak in Gujarati about their experiences on the day after the Godhra train fire: that, I thought, would elicit an almost unbroken chunk of discourse. But it was not the boys who interested me, it was the scribes, writing down their speech on camera in real time. The material they had to write would be clearly recorded, as would their attempt to capture it in transcription. How would their transcriptions compare with the actual statements?

Native-spoken Bhojpuri in Trinidad tends to be between 110 and 125 words per minute; a speed less than 100 words per minute is positively correlated with the speaker testing ‘non-native’ in terms of other features of competence. By my reckoning, normal spoken Gujarati also falls more or less in this speed range: around 110 to 125 words per minute. I would expect any native speaker of Gujarati to speak fluently too, without the pauses that bring the overall speed below 100 words per minute. This means that the speed of transcription is limited by the speed the scribe is able to maintain, not by the speaker. We only needed to look at the scribe: how fast could s/he write longhand Gujarati?

In confessional statements in India, the starting and ending time of the scribe is always given. This allowed us to calculate the transcription speeds of the Tiffin Trial confessions: they averaged an improbable 60 words per minute.

The handwriting in the transcriptions done by our scribes on camera showed a consistent pattern of deterioration: after a few paragraphs, it got larger and more irregular, the words got shorter (or rather, more abbreviated) and there was an increasing use of acronyms. There was also significant right-shift: each line on the page would begin a bit more to the right of the margin. The vowel maatras, too, above and below the words, were more and more right-shifted with respect to the consonants they belonged with. And the frequency of scratched out words and phrases went up.

To get a sense of what this means, consider that this article so far has averaged a bit under 23 words per sentence, with 46 words in the longest sentence, the first. And this is not by any means colloquial speech: it is technical writing. It has also been edited: I have had the option of going back and changing and expanding sentences as much as I want while still preserving their grammar.

In the verbatim speech transcribed later from the videotape, the average sentence length was a bit less than 14 words, and the longest sentence had 31 words. There were five sentences that were incomplete. These are more credible figures, as we would expect verbatim speech to have shorter sentences. Shorter sentences are simply easier to construct in real time. And, at times, in spontaneous speech, it is normal for speakers to abandon sentences that are getting too complicated, resulting in incomplete sentences that are crudely joined to whatever discourse follows.

Linguists abroad often look at the word usage and style in order to determine who might have written a text, or, conversely, if a defendant could not have written it. This brings in the issue of interpretation, and the credibility of the linguist as an expert witness. Could content, too, be presented in terms of numbers?

In an earlier case in 1984, I was asked by some students of Mass Communications if I could analyse an editorial written by Girilal Jain, editor of The Times of India, during the anti-Sikh violence. They had complained about the article to the Press Council, and there was to be a hearing to decide whether Girilal Jain should be censured. Could I find a way of demonstrating that his editorial was excessively communal? I decided, for comparison purposes, to look at all the editorials in Delhi newspapers on that day. I chose three indices of communal content: phrases where ‘we’ referred to Hindus, phrases where ‘they’ referred to Sikhs, and phrases that showed an approval of violence. I counted the total number of words in each category for each of the editorials, and calculated it as a percentage of the total text. By adding up all three categories, I got a score for how communal that editorial was. Plotting all the scores of all newspapers for the same day on a graph showed where the spikes were: which paper had the most communal editorial. The Times of India won hands down.

Since I do not know Gujarati, the two scribes in our legal team tagged the communally loaded words in the Tiffin Trial confessions. The word for atonement, ‘paschatap’ or ‘pastavo’ (‘prayaschit’ in legal Hindi), turned up in the second-to-last paragraph of all the confessions. Looking more closely, we saw that the last two paragraphs were also essentially identical in all the confessions. This was irrespective of the day on which the confession was written and the scribe writing it. They were block paragraphs that had been inserted into all the confessions, not something that could possibly have been generated independently by each of the boys in spontaneous dictation. I was later told that this paragraph, in essence, appears at this point in all POTA confessions in Ahmedabad, not just those of the Tiffin Trial.

In terms of content, there was one other feature that rang false: the confessions were all too focused, too free of the rambling that verbatim speech is known for. At no point had a boy digressed from giving information that would implicate him. This is a sure sign that the discourse has been edited, or at least condensed. Deciding which part of a verbatim testimony to record and which to omit would require the exercise of judgment by the person taking it down. Could the scribe have done this in real time, without having to go back and cut out text or otherwise deface the transcript? And could the scribe have maintained the already improbable speed of 60 words per minute while doing this?

When we write, even if we are only taking dictation, our attention is always on meaning. The only time we are completely fixated on form is when we are copying. The lines of the Tiffin Trial confessions were in almost perfect registration: each page ended on the same line, and not simply where the last sentence or paragraph ended. In the words of one of the team, they looked almost like animation flipbooks. It would appear that the paragraph with the word ‘paschatap/pastavo’ comes from a standard paragraph intended to serve a legal purpose. This, together with the absence of any sign of editing on the confession, suggested the existence of an earlier draft.

The final question at the hearing was: what would have been the actual speed of writing for a document as neat as the confession statements? I had two sources of information to go on.

At the time of the Parliament Attack case, for which I had to analyse confessional statements written in English, I had some paragraphs dictated to me and timed myself writing them down. My speed at first was 22 words per minute, dropping later to 20 words per minute as I saw my handwriting start to deteriorate. If I had tried writing down a full confession, my speed would certainly have dropped further. But I am not a professional scribe.

Our faster scribe was timed copying down the videotaped deposition. He was allowed to pause and rewind if necessary. His instructions were to write as neatly as the confessions. His speed was 18 words per minute. But then, copying down from a tape is not exactly the same as taking dictation longhand in real time.

So, in the end, I was asked to use my judgment. I estimated somewhere between 20 and 22 words per minute, definitely not more than 25.

My conclusion was drawn from this consideration of speed of writing, sentence length, credibility of content, degree of focus and primacy of form: that the genuineness of the confessional statements was in serious doubt.

It was not part of my brief to speculate on how these confessions bore the signatures of the 18 boys in custody. But it seemed unlikely that the boys had actually read the confessions before signing on the back of each page. Later some of them spoke about having been asked to sign blank sheets of paper. Their families, too, said they had been asked to sign blank sheets. But at the time of the trial, it was just an uneasy question in my mind: what exactly had happened between the time of their arrests and the day they appeared in front of the magistrate that made them all decide to sign their ‘confessions’?

Peggy Mohan
Peggy Mohan is a linguist and author. Her most recent book is Wanderers, Kings, Merchants; The Story of India through Its Languages