Letter to the Editor

Kobad Ghandy, one of the senior-most leaders of the CPI (Maoist), remembers his wife and comrade Anuradha Ghandy, the only woman in the Central Committee of the CPI (Maoists), who died in April 2008 of cerebral malaria. 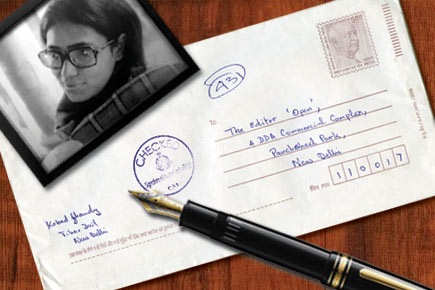 Kobad Ghandy, one of the senior-most leaders of the CPI (Maoist), remembers his wife and comrade, Anuradha.


Kobad Ghandy is one of the senior-most leaders of the CPI (Maoist). Arrested in Delhi last September, Ghandy is currently lodged in a high-security ward of Tihar jail. Ghandy is from Mumbai, and it was while pursuing a course in chartered accountancy in London that he got radicalised. Later, he joined the civil liberties movement in Mumbai. In 1980, he was invited to work in Maharashtra’s interiors by the founder of Naxal group People’s War. He was married to Anuradha Ghandy, the only woman in the Central Committee of the CPI (Maoists). She died in April 2008 of cerebral malaria. In this article written for Open, he pays his wife and fellow comrade a tribute.

On 12 April 2008, a beautiful life got suddenly extinguished. Anuradha Ghandy passed away at the young age of 54 due to the late detection of the killer disease, falciparum malaria. On that day, the Indian people, particularly its oppressed women, lost a blooming flower that spread its fragrance in many parts of the country. Two years is a long time, yet the fragrance lingers on. The sweet scent, like from an eternal blossom, intoxicates the mind with memories of her vivacious and loving spirit. Even here, in the High Risk ward of Tihar jail, the five sets of bars that incarcerate us cannot extinguish the aroma that Anu radiates in one’s memories. The pain one suffers here seems so insignificant, compared to what she must have faced on that fateful day.

I remember the first day I met her, way back in mid-1972. The sparkle and brightness that radiated from her childlike face never dimmed through all the torturous years of struggle and enormous sacrifice. The same bubbly spirit, the same dynamism, and the same active and sharp mind of youth, remained till the very end.

The purity of her soul and her deep commitment to the oppressed never allowed hardship, physical or mental, to weigh her down. That is why the wear and tear of life could not extinguish her youth and exuberance. It was only the deadly and incurable systemic sclerosis which struck her in 2002 that suddenly resulted in her ageing overnight.

Though her face grew wan, she never allowed the disease to destroy her spirit. The fire for a full life, in the service of the country and its people, did not diminish, even an iota. Till her very last day, from six in the morning to twelve at night, she was continually on the move—meeting people, travelling, reading, writing, and even cooking and cleaning, herself. Though the disease was slowly eating away her organs—her lungs, her kidneys, her heart—and crippling her fingers, Anu knew no rest. Even her arthritic knees, which grew more and more and more painful, did not stop her climbing stairs, trekking days in the forests, and often being on her feet from morning to night.

Was it will power? Was it commitment? Her exhaustion, her pain, never showed on her face; she never complained. And to those meeting her, they could not realise what she was going through.

Anu’s life traversed many paths. She was a brilliant student at school, where the progressive and democratic atmosphere of her family played a key role in moulding her. It was in her college days that she became a student activist and leader. In the post-Emergency period, having by then become a lecturer, she became one of the leading human rights activists in the country. After moving to Nagpur in the early 1980s, not only did she become an all-India face of the revolutionary cultural movement in Nagpur/Vidarbha, together with her job as post-graduate professor in sociology, she became a well-known militant trade union leader. She led many a worker’s struggle and even went to jail a number of times. In addition, she became a popular face of the women’s movement in the region. Together with this, she also had a deep impact on the intelligentsia—lecturers, students, lawyers, writers and social activists—of Nagpur and Vidarbha. But, most importantly, her main impact was on the Dalit movement in Vidarbha, particularly Nagpur.

With her incisive knowledge of the Dalit/caste question and her thorough study of Ambedkar’s writings, she was able to effectively challenge the deeply entrenched Dalit leadership with a scientific and Marxist interpretation of the issue. With Nagpur being the centre of the Dalit movement, we shifted our residence to Indora—the biggest Dalit basti in Maharashtra. Her impact on Dalit youth was enormous and she became a regular invitee at most Dalit functions.

People of Nagpur fondly remember this senior professor, staying in a Dalit basti, cycling throughout the city in the famous Nagpur blazing sun.

After Nagpur/Vidarbha, Anu shifted to work amongst the most backward of tribals, living in the forest amongst them, sharing their weal and woe. And finally, in her last six to eight years, she focused on the oppressed women of our country, educating them and arousing them for their emancipation and liberation from poverty.

Through all these ups and downs, we were sometimes together, often apart for months. But, the time we got together were the most cherished periods of my life. Her friendly, independent thinking acted as a great help to a rational understanding of events, people and issues. There was no other person with whom I have had as many vehement debates. This normally brought a balance to my often one-sided views.

Anuradha had the rare ability to combine activism with theoretical abilities. In spite of her day-tonight activities, she was a voracious reader and prolific writer—writing in English, Hindi and Marathi. Though she wrote on many a topic, her writings on the Dalit/caste question and women’s issues have been important contributions to a scientific understanding of two very important societal aspects of India.

But what Anu would be remembered for most is her beautiful nature. At a time when Communism has degenerated throughout the world—Russia, China, East Europe having collapsed, and most other parties degenerated—Anuradha’s nature stood as an ideal. Where power, even petty power, tends to corrupt; where ego, self-interest and craze for leadership/fame eats into the vitals of many a movement, Anu was exemplary. She remained unaffected from the time she was an ordinary cadre to when she became a well-known figure and big leader.

The same simplicity, the same straightforwardness, the same childlike innocence. Her face was a reflection of her emotions—unable to lie, manipulate others or indulge in intrigue. Besides, her ability to bond with all—from the simplest tribal to topmost intellectuals—is indeed legendary. Anu had the beauty of innocence, yet maintaining the sharpness of intellect and dynamism of a professional. It is this combination that gives Anuradha her eternal fragrance.