As a tragic cloudburst wreaks havoc in a remote corner of India best known for its serenity, an eyewitness report. 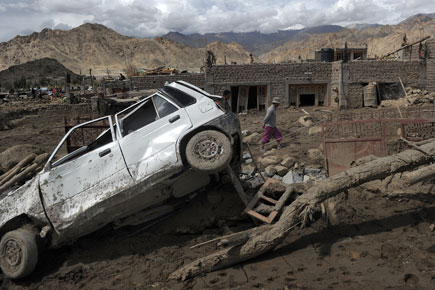 As a tragic cloudburst wreaks havoc in a remote corner of India best known for its serenity, an eyewitness report.


“Abba, ebochi tsong?” (Father, what has happened?), “Abba kasung, amma kasung?” (Where is my father, where is my mother?). These were the wails in Ladakhi that rent the night air on 6 August in Choglamsar, 9 km away from Leh. For a moment after that, it was the frightening roar of massive flash floods that reigned supreme. Within minutes, Choglamsar slipped under mounds of mud that came gushing along, swamping every gomfa (mud house) in sight, almost sweeping away all signs of life.

Elsewhere in Leh, the floods wreaked havoc, destroying villages, bridges, schools, roads and buildings, including those of the Army. Villages like Sabu, Phyang and Nimoo bore the brunt.

It was nature’s fury at its worst, and it originated in Nubra valley, close to the Indo-China border. It all began with that rarest of rare occurrences, a cloudburst—sending down torrents of rain with a suddenness no one could be prepared for. Local Lamas were said to have had such premonitions of disaster, but when it struck, there was no escape. Swollen rivers took no time to burst their banks, with floodwater gushing every which way, breaking new ground with devastating force and dragging along tonnes of mud, stones and debris of what were once people’s huts.

It only took a few hours for the cloudburst to ravage Leh. The BSNL building was reduced to rubble. So too, Leh hospital and Army fortifications. Even the airport was overwhelmed. Its airstrip lay covered with a layer of sludge several feet thick. The old town crumbled.

Over 165 have been confirmed dead so far, with a few hundred missing. Those who escaped death have horrifying tales to narrate. Like Dorje. “The floods have ruined everything for us,” he says, “They have spelt doom in a matter of minutes. I cannot get over what struck us in the dead of night.” Recounts another survivor, Angchok of Choglamsar: “Past midnight, people were shaken up rudely from their slumber, and suddenly there was chaos—with shouts and screams, people calling out for their dear ones to know of their safety. There were also cries of anguish from those trapped within their collapsed houses.”

“I moved out with my old father,” says Tufsun Dorjey,  “I thought my children and wife had left already, but today I found the body of my young son under debris. I found a book with him, an essay he’d recited in school that morning.”

Leh is littered with such heart rending tales of tragedy. Thankfully, as soon as reports reached the Army headquarters in Leh, they rushed out rescue columns. “Getting there was a Herculean task. Roads were covered with flowing sludge that was gaining momentum with each passing moment, and stones and boulders were shooting down from the hills,” says an officer who was in charge of one such column. “We found mud piled in a heap of slush all over with collapsed houses, people screaming for help, and debris almost 10-11 feet high.”

The extent of the damage was clear only on the morning after. Many people were found dead or seen trapped under the debris of collapsed houses, while still many others were untraceable. Communication lines were found snapped, the district hospital submerged, and BSNL towers washed away. Bridges had been thrown apart, and a quagmire of slush engulfed the roads. Leh’s Pathar Sahib Gurdwara had four feet of slush inside, and jawans of the 237 Engineer Regiment had to tear down a portion of a wall to drain it out.

Four days since the cloudburst, there is a funereal air about, as bodies lie wrapped in white in the open, their count going up by the hour. The morgues do not have enough space; there are very few claimants, and as the wetness delays cremation, there are fears of disease outbreaks.

Bad weather has also harried the rescue operations. The airstrip has been cleared on a war-footing, though, and medical aid has been flown into Leh. The Army, Air Force and paramilitary forces are spearheading the operations, despite their own losses. Says Leh’s corps commander, Lieutenant General SK Singh, “The thrust area for the rescue operations is to open up the routes so as to allow the rescue effort to be carried on in inaccessible and remote areas.”

Almost 20,000 people are currently dependent on the men in uniform for food supplies and medical aid. The Border Roads Organisation and Army Engineers have also been pressed forth to re-open communication lines. Soldiers and officers have been working round-the-clock with heavy machines and bridging equipment to restore connectivity to Leh from adjoining villages. The Air Force and Army Aviation wing have carried out umpteen rescue sorties, evacuating stranded tourists (foreign nationals among them) from such far off places as Zanskar and Marka valley.

Preventive steps against epidemic outbreaks are also being taken, though the problem of corpses remains relatively unaddressed. Meanwhile, thousands of people need immediate medical attention. Injury patients are being treated in the Army General Hospital, where they have been joined by the district hospital staff. Several makeshift medical facilities have also been made operational in field conditions with all the necessary equipment and staff to look after the traumatised and injured. Serious medical cases are being evacuated by air to Jammu, Udhampur or Chandigarh.

To Leh’s locals, though, the horror is yet to fully sink in. Reconciliation to the tragedy is not easy. In fear of a recurrence, many of them have taken to moving to mountain top monasteries to spend their nights, descending only on daybreak to resume their search for dear ones as the debris gets cleared.

Life for them will never be the same again. “I have lost my livelihood,” says Padma, another survivor, “I was running a tea stall which was giving me my daily bread. I had some Rs 3,000 in my trunk, but today I have nothing. And though the government has granted some money, it is not going to help much, as now there will be no tourists to give us business, and soon winter is going to set in.”

Such fears of facing the future loom large in the minds of survivors, even as they struggle to come to terms with the calamitous scenes all around them. An early winter could spell a prolonged break in road communication, and with stocks of food and essentials washed away, this could prove doubly disastrous.

The cold desert town of Leh forms a picture of supreme serenity for most Indians who’ve seen little other than the most calming of snapshots of the place.